A bright ruby ​​red and subtle aromas of wild berries are the suggestions that accompany the tasting of Wildbacher, an aristocratic wine from Martino Zanetti’s Tenuta Col Sandago. A wine with a strong personality and surprising durability over the years, which enhances the red grape variety, which came centuries ago from Styria and transplanted into the land of prosecco.

A perfect habitat for the nature of the vine, exquisitely Central European: high hill areas, composed in the right percentage of limestone clays, where the Mediterranean climate meets the Alpine one, favoring the creation of particular microclimates, with strong nocturnal temperature variations, especially during the of ripening of the grapes.
The Wildbacher Col Sandago evokes the breath of great travels, of good reading; it induces the same precious emotions that Martino Zanetti lived and lives in his vineyards, meticulously taking care of the “terroir” of a wholly Treviso sweetness.
The limited but precious production includes all the respect for the land that hosts it, the attention to research, the passion and professionalism that accompanies it. The result is a unique wine, proud to come out of the homologation of many noble colleagues, which goes on the market in the most prestigious channels.
The aging period is 18-24 months, after which the wine matures further in the bottle for another 6-8 months before being sold.
A decidedly “wild and indigenous” wine, which Veronelli himself “envied” Martino Zanetti, as he wrote to him years ago.

Wine Name: COL SANDAGO WILDBACHER
Typology: Red wine
Classification: Typical Geographical Indication of the Trevigiani Hills.
Grape variety: 100% Wildbacher.
Production area: upper part of Col Sandago, in the municipality of Susegana (TV), west of Conegliano Veneto.
Altitude: 250-300 meters.
Vineyard exposure: South-East, South, South-West.
Soil: Clayey-calcareous, with a sandstone skeleton.
Plant density: 3500 vines / ha old plants. 6000 new plant stocks.
Training system: Spurred cordon and Guyot (upside down).
Average production: 1.2 kg per plant – 6,500 kg / ha
Harvest: manual, towards the middle of October.
Vinification: Crushing and destemming of the grapes and traditional fermentation in red, with maceration on the skins for 12-15 days, at a temperature of 26-28 degrees with daily pumping over. Malolactic fermentation follows.
Aging: 20 months in 500 It oak barrels, half new and half of the first and second passage and then in the bottle for another 12 months.

A brief history, the territory

Col Sandago is located in the eastern Veneto region; it lies in the hilly area at the foot of the Treviso Pre-Alps on the border of the Mediterranean climate; it still enjoys the Adriatic climate but is already positively affected by the Alpine climate as well.
It is located in the DOC area of ​​Prosecco della Valdobbiadene

The Wilbacher grape is native to Austria, more precisely known in the Lower Styria region under the name of Blauer Wildbacher; in Austria, this grape variety produces a ready-to-drink rosé called “Schilcher” or brilliant.
Still in Austria today we find clones of this vine; while in Col Sandago they strongly wanted to preserve the vine for what it was originally
Wildbacher arrived in Italy between 1600 and 1700; a hypothesis could be due to its resistance to cold (frost of 1709) and to phylloxera (late 19th century).
The vine has remained rooted only in the Pieve di Soligo area and has not spread elsewhere.
In Italy its registration dates back to 1903.
It is a rustic, strong, resistant vine of regular production.
Until the middle of the last century it was never vinified in purity but, it was only used to give the wines greater acidity.
It is known by all the farmers in the area and is affectionately referred to as “bacher”
The vinification in purity begins in the 1950s in Col Sandago producing an IGT wine.
It is a vine that in the past risked disappearing; fortunately, however, today it is now in all respects part of the heritage of Italian vines and is considered AUTOCTONO (biotype of the Col Sandago area)
It is a late harvest (end of October) the bunch is small, the spherical berries with a dark and thick skin. the ripening itself is late; pruning is done dry.

There is a very low yield per hectare.

Territory: Susegana hills, clayey, limestone with sandstone skeleton. There is no water stress

Climate: mild and temperate without sudden changes; however, there are areas with a particularly ventilated and cool microclimate with a good temperature range and little humidity.

We wanted to create a long-aged wine and the marketing takes place 3 years after vinification.

The grapes are harvested manually in a box are taken to the cellar and placed on a belt with the purpose of selecting the bunches; we then move on to crushing and de-stemming. The harvest takes place in two distinct moments: ripe grapes and overripe grapes, a part of the overripe is left to dry on special grills. The vinifications take place separately in steel and wooden vats.

Aging: 20 months in 500-liter oak barrels, half new and half of the first and second passage.

Subsequently in bottles for another 12 months. 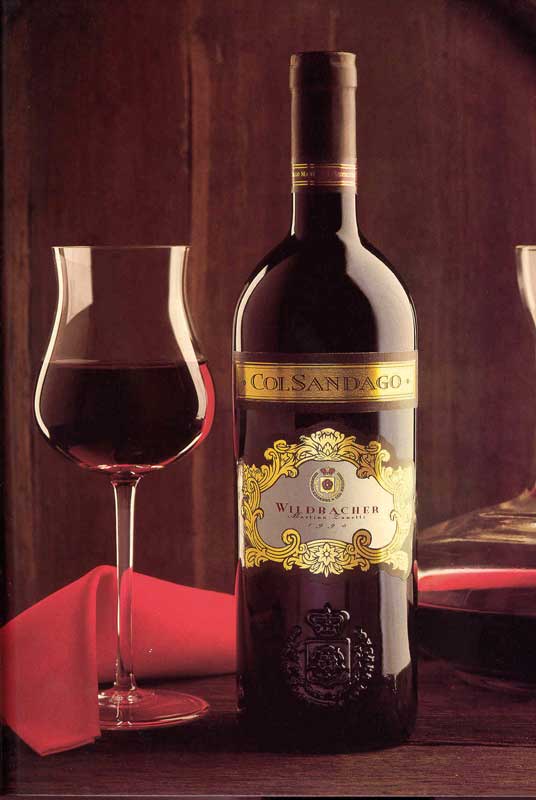