11 JULY 2012
ARTICLES
Villa Tiepolo Steps in Carbonera
In the 1500s, the Tiepolos, a noble and powerful Venetian family that gave the Serenissima two doges, a patriarch, podestà, princes and queens, owned a battirame plant on the river Melma, near the Castle of Carbonera, east of Treviso. . At the end of the century Almorò Tiepolo, procurator of San Marco and senator of the Republic, had his country house built on the ancient layout of the Castle. Already probable Castelliere Paleoveneto and later Roman castrum, the place where the villa and its park stands is actually a very ancient conspicuous point of the plain (cardo) still clearly legible thanks to the extraordinary frontal perspective of two and a half kilometers from which they look, at north, the Dolomites overlooking the city of Belluno. In the Napoleonic era the Villa passed to the noble Valier family and, in the first half of the 19th century, again through parental ways, to the Conti Passi di Preposulo, an ancient family from Bergamo whose known history dates back to the first millennium (973), administrators of Bergamo, direct interlocutors of the emperor, then always loyal to Venice. Built in the Venetian Baroque style, the villa of Carbonera was, over the centuries, increased and embellished. On the façade characterized by a large eighteenth-century tympanum, the main floor is identified with a central three-light window with a balcony and two other balconies on each side; inside, Sansovino ceilings, arched heads, Venetian stuccoes; in the central hall, as well as on the noble floors of the barchesse, frescoes by Antonio Cerva Bolognese (1675). Outside, a large “selese” with statues by Giuseppe Bernardi, known as il Torretto, master of Antonio Canova; Italian garden in the center with fountain and fishpond and romantic park on the sides with mounds, caves and centuries-old trees. On the back, tangents the Rio Piovensan which closes the villa on the north side, we find the appurtenances: stables, sheds, granaries, cellars. On the south-east side of the garden, a noble chapel with a bell tower with a clock surmounted by a dome: built in 1774, frescoed by Gian Battista Canal and dedicated to the Madonna del Rosario, Pope Pius VI granted the small oratory a plenary indulgence. Today Villa Tiepolo Passi is the residence of the Passi family, home to a farm and other activities; welcomes visits and cultural events. 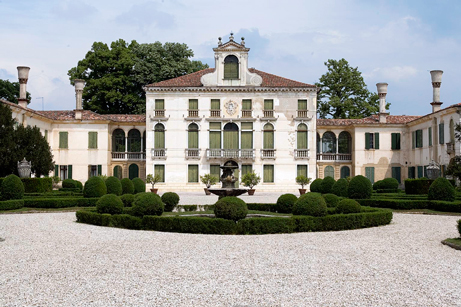