QUALITY, EXPERIENCE, LOVE FOR LIVES THIS IS THE BIRTH OF LUNA DI PONCA

Quality is never born by chance but is the result of experience and teamwork that starts from the awareness of having an excellent product that comes from a land that has always been devoted to the work of the vine and the perfection of its “journey” through the months that lead it from pruning to harvest. A journey that is not easy, made up of difficulties and unexpected events of various kinds but which if accompanied by the knowledge and love that the VINE has always aroused in man over the millennia, wisely combining it with the knowledge of expert winemakers and oenologists, can give new and valid solutions. To understand the meaning of a new wine like LUNA DI PONCA, a blend of Friulano, Chardonnay and Malvasia, it is necessary to understand the soil and the places where it is produced. The lands where it is born. IL COLLIO uses two types of soil: a gravelly one given precisely by the proximity of the ISONZO river and suitable for lighter wines but certainly of high quality as we are accustomed to know by associating them with these territories, the other type of soil and ‘given by a land rich in clay and voted with its contents to more full-bodied and well-structured wines. The experience of the oenologists Stefano Gava, oenologist of Villa Sandi, of Paolo Corso, historical oenologist of Borgo Conventi and Riccardo Cottarella, a guru of the sector recognized for his international fame, have done the rest. The white LUNA DI PONCA is a white wine of 13.5 degrees and certainly destined for success. To those who, he writes, certainly not a wine expert but always an admirer of the fruit of the vine, it seemed an “honest” wine, quiet and with a light flavor that goes well with the fruit aromas just mentioned but which promise a aging of sure quality. A pleasant wine on the palate that stimulates the taste buds to new experiences and leaves in the mouth the fresh sensation of a light wine that is not light. Its 13.5 degrees “betray” the seriousness of a job made of sleepless nights by the three winemakers who are applauded for the enormous effort in creating it. The kind and creative wife of the president, Mrs. Augusta Pavan, who has always been fascinated by the MOON and its influence on the life cycles of agriculture, but not only on the tides, gave a name to this “creature”. , on the very life of the human being, looking at the sky and thinking about the name to give to this wine, he noticed a beautiful full moon and decided to combine it with the soil where the wine is produced, and here is LUNA DI PONCA.

The wine, made with the advice of oenologist Riccardo Cotarella and presented on the estate on a full moon evening, represents the first new product since the winery was acquired by the Moretti Polegato family

Farra d’Isonzo, 24 June 2021 – Borgo Conventi presents “Luna di Ponca”, the new wine with the Collio DOC Riserva denomination, the result of a blend of Friulano, Chardonnay and Malvasia. A long-aged wine, part of which takes place in barrique, and which is obtained from the 2019 harvest grapes from low-yielding vineyards that have obtained the Biodiversity Friend certification. “Luna di Ponca” is the first label of the new course of the historic winery, since the Moretti Polegato family has been at the helm of the Estate, that is to say since April 2019. Since the harvest of that same year, Borgo Conventi has availed itself of the advice of Riccardo Cotarella, who followed every phase of the creation of the new wine.

«As soon as Borgo Conventi became part of our Group – explains the president Giancarlo Moretti Polegato – the desire to create a new wine was born. A product that held a symbolic meaning, being the son of our first harvest on the estate, and that therefore told the story of Borgo Conventi starting from our entry into this territory. To do this, we have chosen the trusted and valuable advice of an esteemed winemaker like Riccardo Cotarella. We decided to produce the company’s first blend with typical varieties, giving rise to the only white reserve of Borgo Conventi which also follows part of the aging in wood. We were guided by the goal of producing an identity wine that would transmit the inimitable heritage of the Collio, or the unique conditions of a terroir with a great vocation and prestige. “

The new white of the company is the result of the joint work of Stefano Gava, oenologist from Villa Sandi, and Paolo Corso, oenologist from Borgo Conventi. The president Giancarlo Moretti Polegato presented “Luna di Ponca” returning the suggestion offered by the name of the wine itself, on the occasion of a dinner kissed by

full moon in the setting of the vineyards of the Borgo Conventi villa, in Farra d’Isonzo. In the evening it was possible to experience the character of the new white of the company. The senses speak of a structured wine, which transmits the aromatic power typical of the area with intense aromas of citrus peel and flowers, balanced and enhanced by a fresh and savory component that amplifies the characteristics of the wine while preserving its finesse.

“Luna di Ponca” is a meeting point between tradition and novelty, between structure and softness, and symbolically also between heaven and earth. The celestial distances and the white light of the moon become “at hand” thanks to the eye of the CCAF Astronomical Observatory which is located between the villa and the rows of Borgo Conventi, and which rests its roots, as well as the vineyards of the company, in the balance between marl and sandstone characteristic of Ponca, the soil that gives the Collio wines their unique and recognized identity. A type of soil that induces useful stress for the vine, limiting the vigor of the grapes, and which guarantees low production and quality grapes, transmitting great minerality to the wines.

“Luna di Ponca” comes from the biodiverse vineyards owned by Borgo Conventi in Gradiscutta, in the Municipality of Gorizia. The selection of the grapes takes place both in the vineyard, where they are collected manually in small boxes, and in the cellar. The Friulano involves a vinification completely in steel, while Malvasia and Chardonnay follow separate fermentation and refinement both in barrique. Once bottled, the wine matures a few more months in the bottle before being marketed almost two years after the harvest. In the 2019 vintage 6096 bottles of 0.75 liters were produced, 230 in Magnum format and 20 Jeroboam, all with the traditional design of the Burgundy bottle, with small and original “variations on the theme”.

Founded in 1975 by Gianni Vescovo, Borgo Conventi owes its name to a legend according to which Rizzardo di Strassoldo, feudal lord of the area, donated a plot of land to the Dominican Fathers, where they erected a convent. In 2001 the estate was taken over by the Folonari family, from whom the Moretti Polegato family, who have always led the Treviso winery Villa Sandi, inherited the baton in the spring of 2019. The company has 30 hectares of vineyards in the Friulian Doc. del Collio (Tenuta di Gradiscutta) and Isonzo (Tenuta di Farra) and produces about 300,000 bottles a year. There are three main lines of the winery: Cru, del Collio and Fiori del Borgo. Quality white and red wines with a territorial character for which the company has distinguished itself, having always concentrated a lot of effort in the care of the vineyards and the final product.

BORGO CONVENTI THE HISTORY THE STRUCTURE THE PHILOSOPHY OF A TERRITORY

Historic company with 30 hectares of vineyards, of which 20 in the Collio Doc and 10 in the Isonzo Doc.

Since April 2019 it has been owned by the Moretti Polegato family, which with Villa Sandi boasts a long history in the world of wine, born and raised on the scenario of the Prosecco area.

“Borgo Conventi is a beautiful company in an area with a great vocation and represents the crowning of a dream for those who, like us, are always guided by the pursuit of quality and excellence, respecting territorial identities” – comments Giancarlo Moretti Polegato.

“Thanks to Borgo Conventi we enrich the line of wines produced by our family by adding the excellence of Friulian whites, with a precise territorial identity”

Founded in 1975 by Gianni Vescovo, Borgo Conventi owes its name to a legend according to which Rizzardo di Strassoldo, feudal lord of the area, donated a plot of land to the Dominican Fathers, who built a convent there.

The Borgo Conventi estate then passed to the Folonari family until April 2019, when the Moretti Polegato family took over it. Continuity is represented by Paolo Corso, who has been responsible for the cellar and the vineyards for decades, while the commercial part is carried out by Villa Sandi, which takes care of distribution both in Italy and in international markets.

The vineyards in the plain of the DOC Isonzo area are characterized by medium-textured soils rich in river gravel, while those on the slopes of the DOC Collio area are distinguished by the typical clayey and mineral soil. The average age of the vineyards is around 20 years and among the varieties planted, in addition to the international vines that have best adapted to the territory of Friuli such as Pinot Grigio, Sauvignon, Chardonnay, Merlot and Cabernet Franc, we find the native varieties including Friulano, Ribolla Gialla, Refosco dal Peduncolo Rosso and Schioppettino.

The estate produces Friulian white and red wines and is one of the most advanced wineries in the region, having always concentrated a lot of effort on the care of the vineyards as well as on the final product.

The philosophy of Borgo Convent

is to produce wines of recognizable geographical identity and high varietal expression, seeking elegance and balance between structure and pleasantness. Each bottle tells a story of high quality, tradition and passion.

The cellar, equipped with the most modern equipment, aims to obtain wines that express the territory and the varietal characteristics to the maximum, leaving intact pleasantness and typicality, cornerstones of the company’s winemaking philosophy. 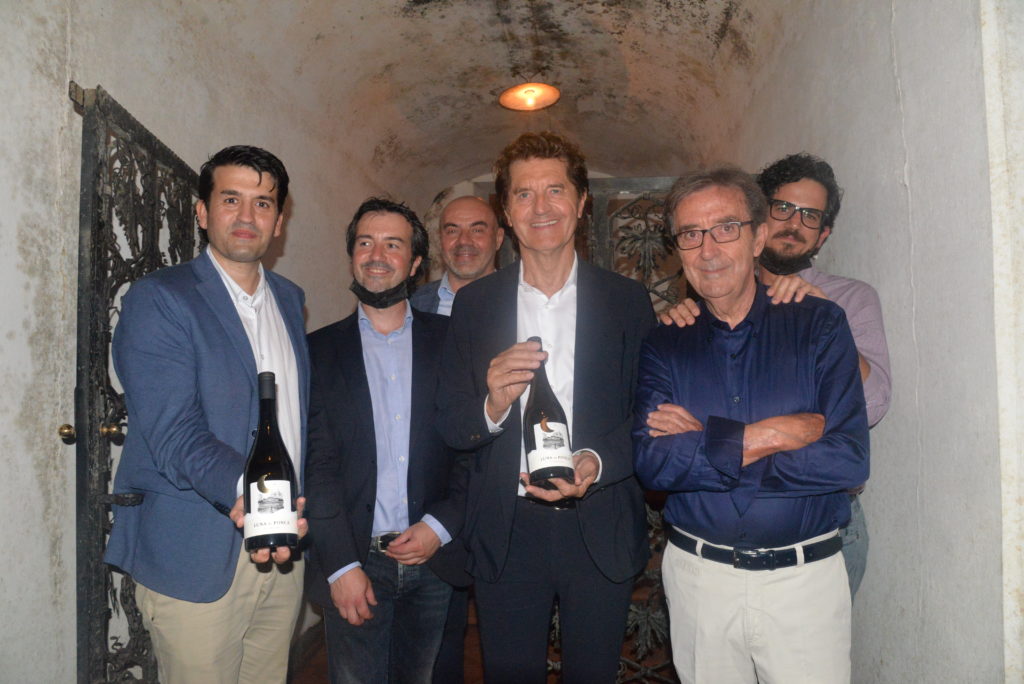