The villa near Vedelago is also known as Villa della Regina as it is owned by Queen Cornaro. Built in the 1500s, the building underwent several interventions, including the eighteenth-century restoration in the Palladian style. The interiors are enriched with pictorial decorations, stuccoes and floors.

The villa, of which the Palladian touch brought by the architect Francesco Maria Preti who oversaw its restoration in the eighteenth century, is located in the agricultural Veneto plain in Sant’Andrea di Cavasagra, a hamlet of Vedelago.

The building is majestic with a wide staircase adorned with statues that rises to the double-height portico supported by imposing Doric columns surmounted by a notched pediment, inside which the Persian coat of arms is represented. Stone statues and acroteria stand out above the tympanum and on the eaves of the wings, elongated laterally to the portico. The opening is marked by maximum symmetry, with openings that are repeated rectangular on the ground floor, on the ashlar plinth, arched on the main floor, still rectangular with a frame on the second floor. On the sides of the villa, a pair of greenhouses connected the barns with large arches set on pillars with a pronaos with three openings and Doric pilasters supporting a pediment. Of the two barchesse, only one is visible, currently not included in the property.

Valuable interiors, enriched with Venetian terrazzo floors, stucco ornaments and, in the living room, rich pictorial decorations with false architectures with leaded windows that open onto a hypothetical clear sky, the work of Angelo Sala who worked there around 1851. The external statuary kit is by the sculptor Orazio Marinali.

The building is the result of numerous interventions over time: a pre-existing sixteenth-century building with a classical layout carried out on the probable direction of Scamozzi, to which was added the expansion wanted by Giovanni Corner, bishop of Castelfranco in the eighteenth century, for the construction of a “building di Campagna ”entrusted to the architects Miazzi and Muttoni and, lastly, the intervention of Francesco Maria Preti conceivable between 1750 and 1754.

The villa is commonly known as Villa della Regina because it was the property of Queen Cornaro, who around the end of the 15th century was forced to give her kingdom to the Venetian Republic in exchange for the fiefs of Asolo and Castelfranco. In 1809 the complex passed to the Persico by inheritance. In 1918 it was occupied by General Enrico Caviglia, commander of the 10th and 8th armies. In 1968 Sir Stafford Sands bought the villa from the Oreffici family, having it restored, equipped with a swimming pool with hydromassage, sauna and tennis courts.

In 1980 a Venetian family bought it back with the intention of restoring it to its ancient splendor: they restored the main body with the barchesse, rearranged the park, refurbished lounges, suites and bedrooms with period furniture, trying to rediscover the atmosphere of a time. Currently the complex is used to host events, concerts, meetings, weddings and parties, as well as the annual Debutante Festival. 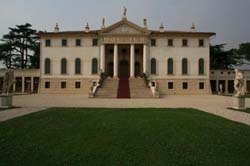