29 MARCH 2013
ARTICLES
Villa Barbaro in Maser
The Villa was built by Andrea Palladio around 1560 for Daniele Barbaro, Patriarch of Aquileia, and his brother Marcantonio Ambassador of the Republic of Venice, transforming the old medieval Maser palace owned by the family into a splendid country house suited to the study of arts and intellectual contemplation. To take care of the decorations, they were called Paolo Veronese who created one of his masterpieces in the cycle of frescoes on the noble floor, and Alessandro Vittoria, a brilliant pupil of Sansovino who took care of the stucco finishes of the entire Villa.

In the area of ​​the Villa there is a museum of carriages and a Palladian temple.

Unique among the Palladian Villas, the Villa di Maser has preserved its agricultural vocation and has remained inserted in a splendid natural setting. Currently, adjacent to the Villa, there is the cellar which dates back to 1850 and which was built by the will of the then owner Sante Giacomelli. It is organized on three levels: warehouse on the first floor, grape processing on the ground floor, aging in the basement. Only grapes from our own vineyards located in a hilly area and registered in the register of the “Montello e Colli Asolani” controlled designation of origin are processed.

The marvelous Villa Barbaro di Maser, a few kilometers from Asolo, in the Treviso area, shines with the genius and creativity of three of the greatest protagonists of the Italian Renaissance.

The project for the construction of the residence of Daniele Barbaro, Patriarch of Aquileia, and of his brother Marcantonio, ambassador of the Republic of Venice, is due to Andrea Palladio who created one of his greatest masterpieces here between 1550 and 1560, transforming the old medieval mansion of the Barbaro family in a very refined stately residence.
To Palladio’s inspiration was added that of Paolo Veronese, who was assigned the task of providing the pictorial decorations, and that of Alessandro Vittoria, author of the sculptures and all the stucco decorations of the interiors. In conceiving the forms of the dwelling, Palladio refers to the great Roman residences, from Villa Giulia to Villa d’Este. In fact, the villa develops horizontally, while the two-storey central body, which projects strongly forward with respect to the porticoed wings, clearly recalls the temples of antiquity on the facade. Four mighty Doric columns support the architrave and the tympanum in which Vittoria created the stuccos that reproduce the pediment of the Barbaro family. Eight arches open in each of the two low wings, the barchesse, whose profile rises at the ends, however, where the two showy sundials overlooking the portico were created: an alternation of ups and downs that reflects the surrounding hilly landscape. On the side of the hill, among vineyards and tall trees, Palladio had a nymphaeum dug with a fish pond from which, thanks to a sophisticated hydraulic system, the water reached the service areas and the park. A rich geometric garden was created in the plot of land in front of the building, but the green areas continue behind it, around the sumptuous exedra that closes the nymphaeum. Alessandro Vittoria, his pupils and perhaps Marcantonio Barbaro himself worked on the sculptures of the “secret garden”. The proportions and the architectural quality of the small temple overlooking the street are remarkable: the main chapel was to reaffirm the social role of the Barbaro family, also welcoming the inhabitants of the village of Maser. Here Palladio is evidently inspired by the Pantheon, especially in the pillars that support the dome, while the central Greek cross plan is combined with the cylindrical shape of the building. The façade is characterized by a classic pronaos, in the style of ancient temples, surmounted by two graceful bell towers. It seems that Palladio himself worked on the stucco decorations of the interiors. Certainly this was his last work by him: death probably took him in Maser, immediately after the completion of the works in 1580. A sober elegance, devoid of lavish excesses, uniformly dominates the interior of Villa Barbaro.

The imagination and exuberance of Veronese triumph on the noble floor of the central body, where the Mannerist painter created

a complex cycle of frescoes on the themes of human and universal harmony, certainly agreed with the cultured owners of the house. The paintings, lively and bright, cover the walls and vaults, in a continuous game of references, optical and perspective illusions: false doors, arches, windows and balustrades from which characters belonging to the same Barbaro family appear, portrayed with surprising realism, but also animal, mythological and divine figures.
In proposing an alternative architectural scenario to the real, Veronese was so audacious that he earned an ill-concealed hostility on the part of Palladio. One of the most famous scenes can be admired in the vault of the main hall: from an imaginary balcony, Donna Barbaro Giustinian, wife of Marcantonio, with her nurse and her three children, welcomes guests.
In this as in other scenes, including the very image of Paolo Veronese portraying himself as a hunter, it is the artist’s brilliant chromatism that gives life to the illusions. The colors animate the figures, give realism to the landscapes, the sky and the fake architectural elements. Combining the genius of Palladio and the inspiration of Vittoria, Veronese’s paintings make the Maser villa an absolute masterpiece of the last season of the Renaissance. From the rooms on the main floor, the visit continues in the garden and in the Carriage Museum, set up in a rustic style behind the villa, which can be reached by crossing the lush vineyards of the estate. An interesting collection of means of transport from past centuries has been built around the original carriages of the Barbaro family. The historic cellar is also open to the public, testifying to the ancient wine vocation of the place. Wines such as the Doc del Montello and Colli Asolani, produced on the estate, age in the basement. 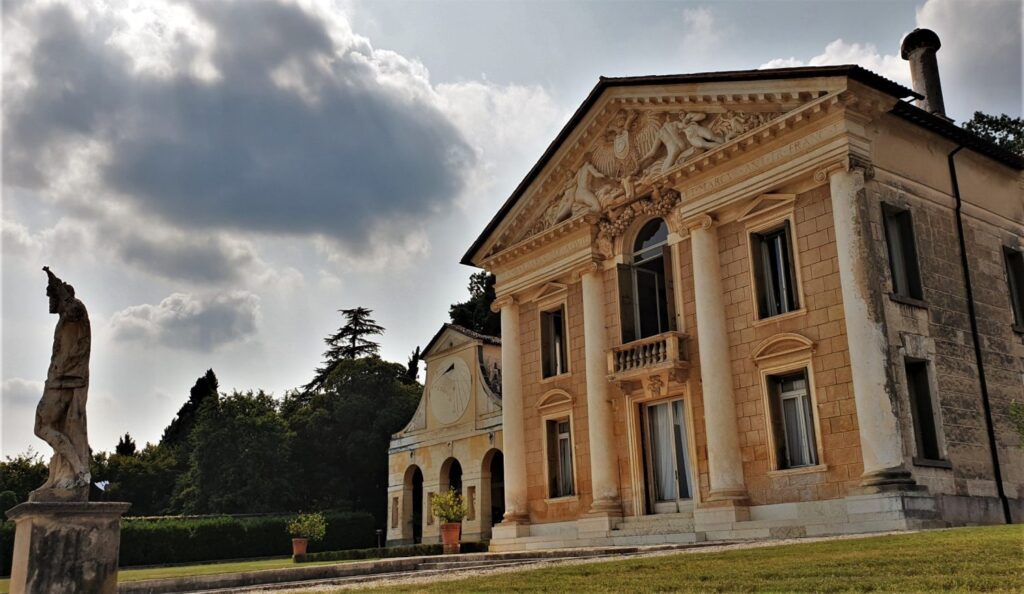