Verona- Christmas Markets and all events trough January the 6th

EVENTS AND CHRISTMAS MARKETS IN VERONA
Christmas in Verona is something special; a magical moment made of traditions and passion in which the city offers residents and tourists the best of itself. Traditions such as pandoro, the typical Christmas cake known all over the world, born in a pastry shop in Verona in October 1894. The events and events scheduled are numerous and varied, almost like the thousand colored lights that surround the most important monuments and main streets. From the end of November, the central Piazza Dei Signori welcomes the NUREMBERG CHRISTMAS MARKET (Christkindlmarkt) with its characteristic wooden houses, where about thirty exhibitors from Upper Germany offer gift ideas, typical German handicraft products, decorations in glass, wood and ceramics, as well as various gastronomic specialties such as Glühwein, typical sausages and the delicious Lebkuchen and Stollen Christmas sweets. The adjacent Piazza del Tribunale and Cortile Mercato Vecchio host a Christmas Village with dozens of wooden stalls offering typical Italian products ranging from Christmas crafts to the best specialties of Veronese and Venetian food and wine, including tree decorations, statuettes of the crib and delicious sweets in large quantities. Since 1984, the hidden archways and internal galleries of the Arena amphitheater have hosted a grandiose INTERNATIONAL REVIEW OF THE CRIB, which returns every year constantly renewed, offering visitors over four hundred works and dioramas from all corners of the world: from Europe and from ‘Latin America first of all, but also from Africa, Oceania and China.

The exhibition is accompanied by the large Comet Star, a seventy-meter-high steel archisculpture that connects the Arena to Piazza Bra, with an architectural gesture of extraordinary elegance and rare beauty. Square where from 10 to 13 December there is THE SECULAR FAIR OF SANTA LUCIA which attracts hundreds of stalls from all over Italy and tens of thousands of visitors, who buy toys, clothing, local handicraft products, gastronomic specialties, merchandise of all sorts and lots of sweets. On the third Sunday of December the VERONA CHRISTMAS RUN takes place in the streets of the historic center, a non-competitive foot race in which the participants are dressed as Santa Claus for a day of sport and solidarity, with part of the proceeds being donated to charity. Rich Christmas lunches and Christmas Eve dinners are organized in all the restaurants of the city, in the trattorias and taverns, with typical menus and tasting of local products. On the billboards of the theaters there are many classical and symphonic music concerts, cabaret evenings, family shows and prose performances with the best national theatrical productions. On New Year’s Eve there is a big party in the square organized by the municipal administration; parties in discos and nightlife venues, dinners in restaurants and historic buildings, exclusive parties in Renaissance villas and gala concerts in theaters. On January 6, the MOST WAITED AND PARTICIPATED appointment is THE BRUSA LA VECIA, the burning of the witch that chases away the misfortunes of the past year and propitiates the year that has just begun. In Piazza Bra, a large puppet about ten meters high is burned following a tradition that descends from ancient pre-Roman rites and observing the flames to understand how the winter will continue.

FAIR OF SANTA LUCIA (stalls from all over Italy with toys, clothing, crafts and sweets)

NEW YEAR’S EVE AND DINNER (parties with music, DJs and fireworks; dinners in the best restaurants) 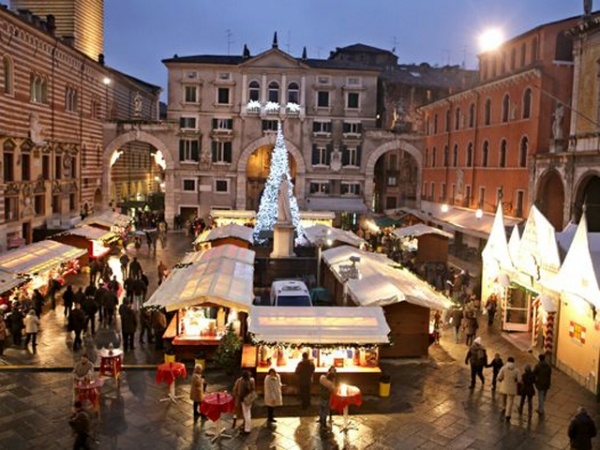