Venice. Two “shepherds” and a clock in the square from 1499

Not everyone knows that in Piazza San Marco in Venice there are two shepherds since 1499, the construction date of the Clock Tower. Looking to the right with the Basilica behind you, raising your eyes on the top of the Tower, two bronze figures known as “The Moors” stand out. The name derives from the color of the bronze oxidized by time, but observing the two figures closely you will notice that the two are covered with animal skin, perhaps sheep. One is younger, the other is older. At the stroke of the hour (two minutes earlier for the old man and two minutes later for the young man) the two figures, still on their legs, perform a twist that allows them to hit the bell emitting a very unique sound. The “old man” is the one on the right side looking at the tower from the lagoon. He is big, with a beard and you can guess that he is older than his “colleague” on the left, thinner and beardless. How many have seen from up there. If they could talk they would surely tell us some interesting stories. Maybe who knows how many times Casanova will have waited for the bell to toll before or after one of his love affairs that have gone down in history. Olidoro and Migliabecco are their names. Oli the old, Miles the young (this is how today’s young people would have shortened them. Our shepherd friends measure almost three meters each, just like the bell that bears the Barbarigo coat of arms. The top of the tower can be visited by booking on the website (https : //torreorologio.visitmuve.it/) Admission by reservation only, with a specialized guide. Admission is allowed from the age of 6. Full ticket: 12.00 euros Reduced ticket: 7.00 euros * Children aged 6 to 14 years; students aged 15 to 25; citizens over 65; residents and those born in the Municipality of Venice; holders of the Rolling Venice Card; purchasers of tickets for the Museums of Piazza San Marco or Museum Pass; purchasers of the ticket for the Secret Itineraries in the Doge’s Palace ; ICOM members; staff of the Ministry for Cultural Heritage and Activities (MiBAC); MUVE Friend Card holders, ticket holders for the special “I Tesori nascosti del Doge” special route, holders of ISIC – International Student Identity Card. * Onlin and only the reduction is available for children aged 6 to 14, students aged 15 to 25 and over 65. For the other reductions it is necessary to present a document certifying the right to the reduction. Buyers of the ticket for the Clock Tower are entitled to free admission to the Correr Museum, the National Archaeological Museum and the Monumental Rooms of the Marciana Library.

A clock? No, a masterpiece of engineering and beauty
The Clock of the Moors was created to indicate the time with a single hand. And not on a 12 but 24 hour dial. A precious dial in gold and blue enamel.
Mark the time, day, moon phase and zodiac. On the terrace at the top of the Tower are the Moors who strike the hours with a club on a large bell.
The watch is also equipped with a carillon mechanism that is activated only on the days of Epiphany and Ascension. On those occasions, the characters of the Nativity and the Three Wise Men parade from one side to the other of the semicircular platform above the quadrant at every stroke of the hour, then re-entering the Tower.

The clock machine
The heart of the entire Clock system is a complicated set of gears located in a large metal structure with a cruciform plan placed in the center of the Tower, the real engine of the system. The current clock was rebuilt in 1750 by Bartolomeo Ferracina. The restoration of Gorla in the late 1990s significantly modified the original machine, built at the end of the fifteenth century by G. Carlo Rainieri.
With the introduction of the charging automation, the permanent presence of a person, who previously lived in the Tower, is no longer necessary to make it work.

One of the two bronze Moors and the clock bell at the top of the Tower
The Clock of the Moors: 270 years of health
What is certain is that age makes itself felt and the 270-year-old “patient”, while enjoying good health, requires special attention and care. Here then comes Simonpietro Carraro, “the doctor” of the most famous clock in the lagoon. It is he who has been monitoring its operation since 2007, always ready to intervene for any need. And to passionately tell the story of one of the symbols of Venice. Because the Clock of the Moors knows him very well. Each of its components has no secrets for him. Suffice it to say that in 1999, the year in which on the occasion of the 500th anniversary of the construction of the Tower it was restored by the watchmaker Alberto Gorla, Carraro, called to make the analytical survey, dismantled it and reassembled twice. He inventoried and designed the thousands of pieces that compose it, which were then taken to the restorer’s workshop in Cividale Mantovano.

A jewel to be preserved
Simonpietro Carraro is a mechanical engineer and from an early age he had a passion for watchmaking.
«Mechanical works – he tells us – need attention and maintenance, above all because they are particularly sensitive to temperature variations. The watch is in good health. For routine maintenance I visit it a couple of times a month: I clean and lubricate the gears, tighten screws, check that everything is working at its best. 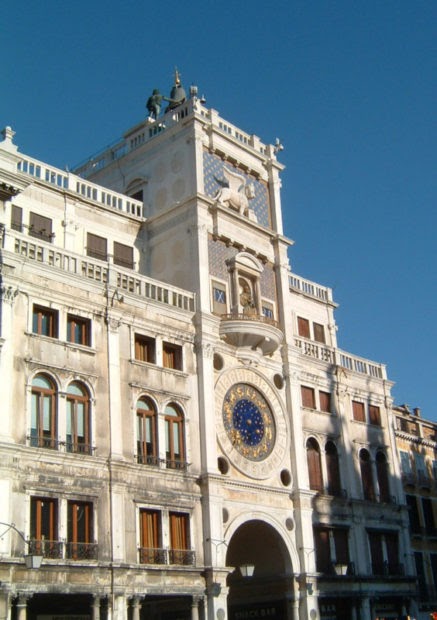