Venice. The “Impiraresse” an ancient work.

Venice. The “Impiraresse” an ancient work.

Difficult to find them nowadays. The photos you see were taken by Pio Dal Cin during a photo session in Venice in the late 1980s. The photographer says: “I had to create a photo book for an aspiring model and looking among the characteristic places of the Serenissima, I came across these elderly ladies who were doing this ancient work of” IMPIRAR LE PERLE “: in Veneto dialect, Impirar means” TO INSERT ” and that’s what these ladies did with extraordinary skill. I thought that associating an old profession with a young model was the right contrasting combination to give visibility to both. I am happy to have done this , because since that day, I have never been able to meet them again “

Below is a historical and cultural explanation of who these women were taken from the site: http://www.ferenaz.it/le-impiraresse/chi-erano-chi-sono.html

For the economy of the city, the work of the impiraresse played a decidedly important role. At the beginning of the 1900s, the women who carried out this activity were more than 5,000 and therefore meant as many families supported by these women who, working at home, could also continue to look after their families and children. It is difficult to talk about emancipation, because their freedom to work was badly reconciled with other fundamental rights. Since the end of the 19th century, the impiraresse adhered in large numbers to category strikes, but always with very poor results, not to mention often ridiculed even by the male press of the time.

Characteristic of this work is that it takes place during the summer, with the women sitting in the calle (the typical Venetian street); each with their own tools to make cocoons (with the meaning of circle, panel) and chat (or gossip, as some mischievous insinuate). Interesting is the harmonious depiction of the 1880 painter John Singer Sargent (now in the National Gallery in Dublin), where young women are dignifiedly engaged with their tools.

The work tools of the impiraressa are very simple: a wooden tray with a slightly curved bottom where the beads are placed, a palmette, or 40/80 needles 18 cm long held in the hand like a fan and the threads about 2 meters long, generally made of linen or cotton.

The manufacture of the fringes in glass beads requires two different phases: the first is that of the threading of the beads which takes place with a kind of comb made of particular very long needles but without eye and with a hook that serves to hook the cotton threads where the beads will be transferred; the second phase is that of weaving: the various strings of pearls are practically woven with pedal-operated looms, which will finally be blocked by a cotton ribbon so as to form the fringe. This type of processing is now disappearing. Only the Gioia company remained in Venice which, in the desire to preserve traditions, recovered the last old wooden looms from the famous Costantini company that are still used today for the production of glass bead fringes, an article that is now a niche unobtainable elsewhere.

The PHOTOS are original and copyright -pio dal cin- 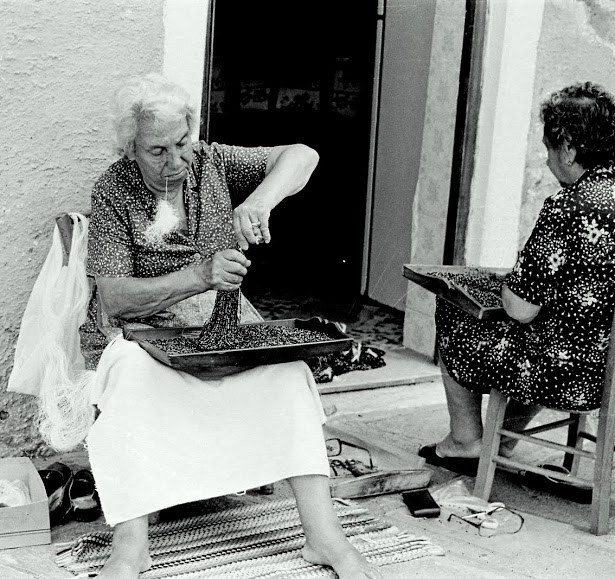