18 SEPTEMBER 2014
ARTICLES | RELEASES
Veneto by bike: conquering Monte Grappa
(ANSA) The climbs that lead to Monte Grappa, in the three routes distributed between the provinces of Vicenza, Treviso and Belluno, are considered among the most beautiful in Italy, even if quite difficult and therefore recommended for those who travel by bicycle with a certain familiarity. Their length and height difference make them particularly challenging.

The classic route, in the province of Vicenza, corresponds to the “Cadorna road”, built during the war by the general of the same name to reach the summit of the massif, located at 1,775 meters above sea level. The ascent starts from the center of Romano d’Ezzelino and reaches the summit in 27 kilometers. The hardest parts are the initial one (just under 8 km) and the final one, while the intermediate section also has 3 kilometers of slight slope, which allows the cyclist to catch his breath and regain his strength.

Less known and popular, but just as easy to pedal, are the ascents from the other slopes of Monte Grappa, that is, from the provinces of Belluno and Treviso. In the first case, you can climb from Caupo or from the Seren Valley, which offer dreamy views only on the Grappa side but also towards the Belluno Dolomites. Moving to the eastern side of the massif, therefore in the province of Treviso, you will find the Semonzo climb and a whole series of sockets that lead to the Grappa through the panoramic road of the malghe: you can climb from San Liberale (Vedetta-Archeson), from Possagno (via degli Alpini, but here the steepness is extremely hard), or from Monte Tomba (located at 869 meters above sea level), arriving from Cavaso del Tomba da Pederobba or Alano di Piave.

There are also numerous possibilities for off-road cycling on mountain bikes with routes of varying difficulty, height difference and length, on military roads, now managed by the Forestry Corps, and mule tracks. Grappa is a mountain much loved by cyclists from all over the world: this ascent, in the seventies and eighties, was repeatedly included in the route of the Giro d’Italia, even with stage arrivals. (HANDLE).

THE ITINERARIES
Mountain-bike and ski-excursion itineraries

Around the Cima – 3 hours
From the Forcelletto hotel, go up the military road that goes around Mount Pertica reaching the spur of the Nave, north of the Ossuary of Cima Grappa. Once you get off at the Bassano refuge, take the setiero n ° 156; leave it at a small fork and go down to the left along the mule track which, with a few hairpin bends, arrives at Cason dei Lebi. From here a beautiful flat road in the middle of the woods leads to Malga Bocchette, from which in short to the Forcelletto.

In Val delle Mure – 2 hours
From Malga Vedetta you go up briefly towards the top of the Mandria; the road goes to the opposite side, touching Malga Archeset and then descends towards Bocca di Forca. You follow the entire valley floor of Val Archeset, subsequently reaching Malga Paradiso and Malga Caparona to finally reach Val delle Mure. There you go up to the hut of the same name from which you return to the starting point along the Val di Archeson road.

Gli Asoloni – 3.30
Just below Cima Grappa, from the crossroads to the Scarpon refuge, follow the long grassy ridge of the Asoloni (trail sign n ° 20) to Col della Berretta. I went down the path or the road to the Finestron inn, we head towards Magnola; shortly before this locality, a road to the right climbs to Malga Fratte and continues at high altitude to finally descend to Malga Termine, at the bottom of Val Cesilla. Now go up towards the small saddle from where, along the military road that goes around Mount Pertica, you go up to the military base of Cima Grappa. For the state road you finally return to the starting point.

The High Hills – 3 hours
From Campo Solagna take the road to San Giovanni; you leave it at the first bend, instead continuing straight along the west side of the Colli Alti for several kilometers, mostly flat or slightly uphill (after 2.5 km an interesting detour to the left for the natural arch of Pertuso) up to exit near the Finestron inn; instead of reaching it, go back south along the road that leads to San Giovanni: where it turns an elbow on the bottom of the first valley you cross (house), you go over the ridge and, along a series of small roads and mule tracks (trail no. 40), you they skirt the summit slopes of the Colli Alti until they return to Campo Solagna. 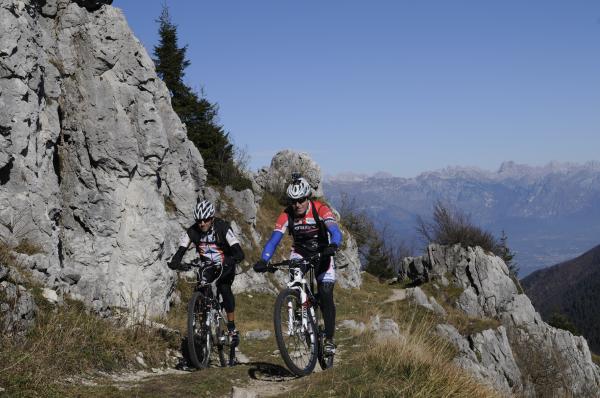