Treviso’s folk traditions of Lent: the stake of the old woman

THE ORIGIN
The tradition of burning or drowning a human-shaped puppet in water at the end of winter has deep and very remote roots that take us back to prehistoric times. According to scholars, this ceremony was a magical ritual to chase away the bad season and invoke the arrival of spring.
It was a rite of fertility and fecundity, practiced by our population already in the Paleolithic and Neolithic times, which offered the divinities of nature real sacrifices, including human ones, later replaced by puppets …
Subsequently, this cult found its temporal location at the beginning of the year, when in the Mediterranean climate regions the warm season arrives immediately after the first winter frost. For many ancient peoples, in fact, the year began in March and the Republic of San Marco also opened the calendar year on the first of this month, a custom known throughout Europe as the “more Venetian calendar”, also imitated by other states .
The Romans also had a woman-shaped idol, “Anna Perennia”, a statue that on March 15 was carried in procession and then thrown into the Tiber as a auspicious propitiatory rite for the population, to start well (annare) and conclude happily (for -annare) year.
For the Latins, the statue of Anna Perennia had the same function as the scapegoat of the Jews, a symbol of human wickedness, which takes upon itself the sins of the community, atoning for the sins of all with her death.
The “vecia” represents the misery of the past season, hunger, misfortunes, diseases, injustices suffered, the rejection of a negative past, the wish for a promising future for the countryside and for life.
In the Balkan countries, even today, a puppet covered with leaves is thrown into the water by the children of the country to invoke the spring rains that make forage grow for livestock.
With the triumph of Christianity, the tradition of the feast of “vecia” was confused with that of “Half Lent”, when the Church, to soften the rigors and austerity of the penitential period, allows a break for refreshment with the Sunday called “Laetare ”, Who sees the flowers returning to the church, the voice of the organ and the pink color of the vestments, instead of purple; for a day of jubilation in view of the feast of Easter.
It was probably in the Middle Ages that the people thought of resurrecting the Carnival in the middle of Lent and the ancient pagan puppet, lost its vegetative meaning, became the victim of the popular outburst for fasting and abstinence, for the spring that still did not arrive, for the empty barn and “tesa”, for the vegetable garden and the chicken coop that gave nothing, for the owner who was never satisfied.
Fire and water were not the only ways to punish “vecia”: in Romagna, for example, the rite of “segavecia” is held in several cities, which consists in bringing a fake old woman stuffed with dried flowers and sweets instead of straw or tow and saw it in two to release the content, which is taken by those present, as can be seen at the cinema at the opening of Fellini’s film “Amarcord”. Even the date of the execution of the “vecia” can vary from Thursday in mid-Lent in Alto Adige or to the night of San Giuseppe in Emilia, but it is always before spring arrives in the whole area of ​​diffusion of the rite, which includes almost all of Europe, from Portugal to the German-speaking countries and those of Slavic culture.

HISTORY
Although the tradition of “brusar la vecia (1)” of Half Lent has always been alive over the centuries, especially in the countryside, to get reliable information from written sources we need to get to the period between the eighteenth and nineteenth centuries when Napoleon ordered the first true ethnographic investigation into the uses and customs of the various departments of the Kingdom of Italy, which also included the Veneto. The custom is also documented in the period of Austro-Hungarian domination, although it survives as a simple bonfire, without the process that could give voice to popular discontent and patriotic claims. With the unification of Italy the “vecia” of Half Lent returns to use and the chronicles report that the tradition was introduced in the city of Treviso under the administration of the mayor Giambattista Mandruzzato (1881-1884) by Count Tito Paja, spiritual heir of Count Tita Rinaldi, famous for his antics (mattane). The first edition of the burlesque trial took place in Piazza delle Erbe, which later became Piazza Crispi or even Hesperia, with the collaboration of a speck of the time, the hunchback Perale, owner of a stationery shop and well known for his sharp tongue that did not spare nobody; so that

and he takes up his seat on a stage set up in Piazza Garibaldi and holds the trial in front of the papier-mâché “vecia”, dressed in old clothes with holes in them, stuffed with straw and rags, suspended above the water with iron cables held in place by a crane; the trial takes place in full order, with the contestation of the guilt and the clash between the accusation and the defense, according to a procedure developed in past centuries.

THE RITE
Even if the most widespread tradition has it that an old woman ends up at the stake, in many countries of the Marca it was expected that an old man would accompany her in the flames, well ahead of the standards of par condicio and equal opportunities of today, especially in the localities of the lower Sile, such as Cendon or Casale. In Sant ‘Alberto di Zero Branco, on the other hand, only the old man was burned for a form of rustic cavalry.
When the stake was organized by the hosts, it was customary to send around the streets a “newsboy” or private auctioneer announcing the place, time and method of execution of the “vecia” or “vecio”, which remained on display outside the tavern , as it still happens today in Vascon, where for almost half a century the life-size puppets of the “deputies” have been put out to sunbathe outside the Friendship bar and many people go to be photographed together.
In the lower Treviso area, it was customary for schoolchildren to put their masks on the face of the “vecia”, kept aside after Shrove Tuesday, as a sign of joy for the resurrection of the carnival.
With the revival of the tradition of “vecia” in the 1960s, the use of the auctioneer has ceased because in its place the epigraphs or mortuary announcements are used, which are posted in public places to notify the population of all the details of the event. The epigraphs are real parodies of funeral notices: listed in mourning, they report in large characters the joking details of the death and the charges, specifying the place and time of the event and finally the alternative date of execution in case of bad weather.
To give an idea of ​​the hilariousness of these “dead nissioleti (5)” just take a few texts from the latest editions at random: (1992) “After a life spent doing little, chat a lot, paying the tiket, the trache (6 ), the mutual, the iciap, the health tax, the tax on plums, medlars and stropacui (7) etc.etc. On Thursday of mid-Lent, respecting tradition, Mrs. ERMINIOTTA MANGIA POMEE (8) will be tried …… .. “ 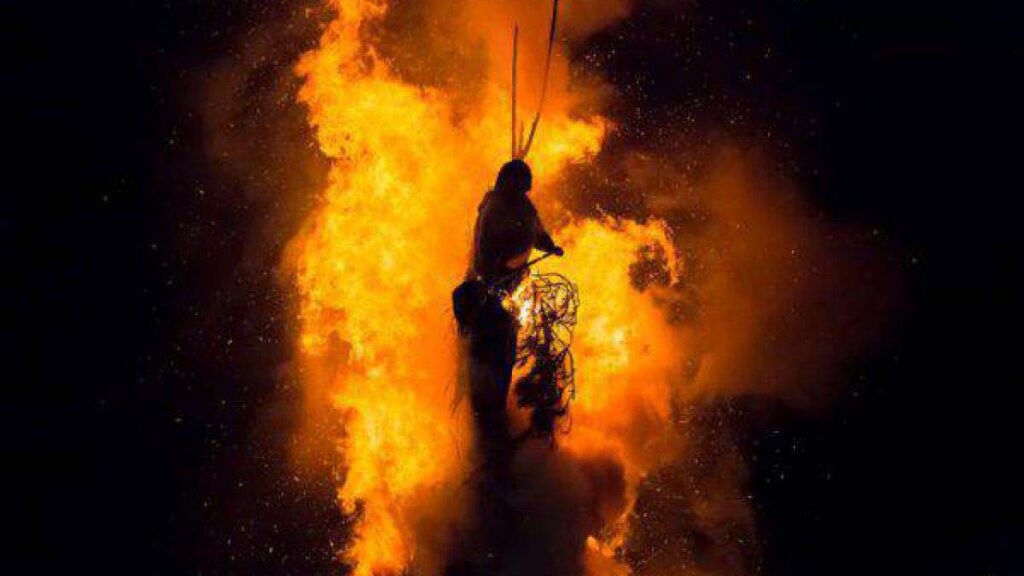