Treviso underground- Tourist itinerary to discover the cunnicles of the wall

TREVISO UNDERGROUND, TOURIST ITINERARY TO DISCOVER THE CUNICLES OF THE WALLS
Guided tours: the underground Treviso opens to the public

The tunnels of the walls, a new itinerary for tourists

First section from Porta San Tomaso to the Island of Paradise

There is a Treviso to be discovered and it is under our feet. The Treviso wall system is a marvel that can be known and visited, the routes can be used with the accompaniment of expert guides from the Treviso Underground Association.

The first itinerary is the one that concerns Porta San Tomaso. You will enter near the Stefanini, then skirt the walls from the outside and enter the underground rooms of the gate, used first as a gunboat, then as shelters during the world wars. The route will continue to the Isle of Paradise, where archaeological remains are visible that testify to the hydraulic works carried out to defend the city.

The rampart of Santa Sofia is also open. This is one of the most significant points of the underground. You will enter from the gardens near the Alpini hatch, and it will be possible to access the old slaughterhouse, built inside the bastion. The rooms and drains of the structures are still visible. Then, walking along the bastion from the outside, you will be able to enter a further tunnel that goes for a few tens of meters, which in the Middle Ages was used by troops to move while remaining protected and hidden.

Thousands of requests for visits have already been received by the Treviso Underground Association.

There are many other routes yet to be activated, for example the bastion of the Castle has some tunnels and rooms, and there should also be the remains of the medieval castle. Also under Porta Santi Quaranta there is a large room, already accessible, and around the city there are probably many other undiscovered tunnels.

The quadrilateral of the city walls has various underground paths.
Two, near San Tomaso and near the “Ponte dea Goba”, will soon be open to visitors.
Others (via Roma and near Porta Santi Quaranta) not yet

Photos taken from www.tribunatreviso.it of 30 09 2015 and internet 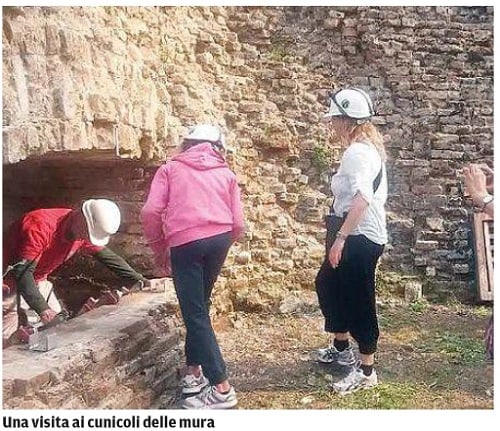