Treviso- Christmas and all the events in the center
SOURCE AND PHOTOS: Treviso Today (https://www.trevisotoday.it/attualita/natale-incantato-programma-treviso-2021.html)

Enchanted Christmas 2021, over a month of events in the center of Treviso
From November 26 to January 6, surprise performances, performances for families and a Santa Claus village set up under the Loggia dei Cavalieri. The lights and the tree are back in Piazza dei Signori

A Christmas of tradition, street artists, music and theater. The “Enchanted Christmas 2021” was presented on Tuesday morning, November 23, at Palazzo Rinaldi, an event scheduled from November 26 to January 6 for the most anticipated holidays of the year.

The shows will in most cases be surprise events, including performers, musicians and traveling theatrical pieces: a wide program from the center to the neighborhoods, capable of catapulting citizens, visitors and families into the traditional Christmas atmosphere. The traveling performances will feature dancers, artists, musicians, choral groups, marching bands, actors and theater groups: all the shows will be held between 3 and 7 pm between Isola della Pescheria, Ponte dei Buranelli, Santa Maria dei Battuti, Loggia dei Cavalieri, Piazza Rinaldi and Piazza dei Signori. In the historic center, on the water and in the neighborhoods, lights and trees of light will return as well as the now traditional Loggia Incantata, designed and built by Michele Crema for the MC3 Design studio, which this year will host the Village and Santa’s House: every weekend, in fact, the children’s idol will welcome the children for the delivery of the letter or for a photo (Saturday, Sunday and holidays from 10 to 13 and from 15 to 20).

In a Treviso dressed up there will also be space for the new Christmas Post Office, with two elves who will travel to the city to collect the letters. The wishes, intentions or simple Christmas messages of the little ones can be posted in the Santa Claus Box located in Piazza dei Signori, near the monumental tree. In January, the 10 most beautiful letters will be chosen: just enter your phone number to receive, in case of victory, a special gift.

ENCHANTED CHRISTMAS-2
Christmas Run
Enchanted Christmas 2021 will experience its first highlight on Wednesday 8 December with the Christmas Run, a 5 km free-pace walk that will see participants dressed as Santa Claus along the streets of the City to breathe the magic of the holidays and support Advar and the City Foundation della Speranza: the event will be open to people of all ages, with an eye on the little ones. The Christmas Run can accommodate up to two thousand participants: adults, with registration, will receive the Santa Claus dress that they will wear during the event, while children and teenagers will receive the characteristic red cap as a gift.

Tree in Piazza dei Signori
Also this year the lighting of the monumental tree, donated by the Municipality of Brunico and with the support of Volksbank will take place on a surprise day and time. The tree will be customized, thanks to the precious support of Coin, with smart lights designed by Twinkly, capable of reproducing animations and extraordinary lighting effects. On the occasion of the access, 50 dancers will gather in Piazza dei Signori for an artistic flashmob. The event will be filmed and will give life to the traditional video greeting of the City of Treviso.

Buskers
Among the street artists who will perform in the city on weekends there will be Candy Candy, two dancing candy canes, the Elves of Wishes between stilts and strange bicycles, The Snow Lords, elves break dance dancers, Ice King and Snow Lady, able to improvise snow on stilts. Among the traveling shows there will also be the “Carrozzone Musicale” in Fellini’s Circus style which will be the basis for the performances of the most diverse artists, bringing atmospheres of wonder and beauty with the group The Bebidens, four colorful musicians and a dancer who will play pieces for children and families and Clowns in the Ward who will bring entertaining shows between entertainment and solidarity.

Music
There will be prominent musicians with Christmas reinterpretations of international hits. Carlo Colombo, pianist and singer, between stories of everyday life and the performance of original songs and jazz-swing covers will bring swing atmospheres of the 30s, 40s and 50s accompanied by jazz musicians. Unusual Trio will instead play contemporary pieces, arranged in an acoustic version both vocally and instrumentally. Voices, guitar and percussion will thus create a unique and engaging atmosphere. The Funkasin Street Band will bring a traveling and non-stop show with 12 wind instruments and three percussions for a real street parade. And again: the vocal group Solinsei con brand

the Christmases of the Italian and European tradition sung a cappella; Giazzati 4et – Treviso jazz band embellished by the voice of Valeria Bruniera – will propose a Christmas carol concert, where the songs are interpreted between swing, bossa and jazz. The Springo Street Band, 20 elements in Christmas clothes, will bring the most famous Christmas songs downtown; the duo made up of Rita Brincoletto and Diego Vio will perform a repertoire of songs including international hits, spirtiuasl and gospel. Finally, there will be Kyn Threeo, a trio of Treviso musicians with a repertoire that will range from jazz standards to covers of Italian and international rock and pop music. Among the performers there will also be Diego Basso with the Art Voice Academy Choir which will bring Christmas music and songs.

theater
The Teatro delle Arance will perform with two shows: Frogs, Ranocchi, Incantesimi and Pastrocchi and Pinocchio Storyteller, in addition to the Stories of Casa Nostra. On December 5, at 5.30 pm, in Piazza Rinaldi, the show by Jgor Barbazza and Davide Stevanato “It was all countryside” will be held, a bitter-sweet comedy that puts the Veneto at the center of the scene, with the actors who will make the audience relive episodes nostalgic of the past (info: www.comune.treviso.it)

Tradition
There will also be a chapter linked to the tradition of our territory with the Pastoria del Borgo Furo that will bring the “Ciara Stea”, between bagpipes and period costumes, through the streets of the center. On Christmas Eve, however, there will be the Living Nativity, always organized by the Pastoria del Borgo Furo. On December 24, however, the Radiofiera will bring their Christmas concert to the Isola della Pescheria. On January 6 there will be the Mythical Befana with a flying broom ready to give socks to children.

Productive activities
In Piazza Borsa there will be the Ice Rink with the Christmas Village, open from November 19th and in operation until January 16th. Borgo Cavour will host the gift market on 5, 12 and 19 December and Mammart’s creativity will bring its productions on 6-7 and 8, 11-12, 18-19, 23 and 24 December in Piazza Indipendenza. Arti & Bio will be held instead in Piazza Independenza and Piazza Aldo Moro on December 3-4-5 with certified organic food at zero kilometer.

Paths between myths and legends
Thanks to Gruppo Some, it will be possible to attend a special event, The Legend of Christmas 2021, this year in online mode (4.30 pm) with his boss and his assistant. The show will be broadcast live on the Facebook page “Some Teatro Sant’Anna”. The Children’s Library will instead host Christmas readings (for children of all ages) scheduled from 2 December to 4 January, from 5 to 6.40 pm. The events will be free with limited numbers (info and reservations at tel. 0422-658993, brat.bibmingham@comune.treviso.it). The Unpli Committee and Marca Treviso will promote guided tourist visits: “Venetian Mysteries in Treviso” will be held on November 20 and 27 at 4 pm, guided tours in the historic center of Treviso to discover the legends and mysteries that link the city with Venice. On 4-8 December, 8 and 22 January, at 3 pm, there will be “Treviso City of art and water”, a guided tour along the waterways of the historic center. On 11 December the nature excursion “where Sile accompanies you” will be held, along the Restera (info and reservations Iat Treviso center, tel. 0422-595780, info@turismotreviso.it). 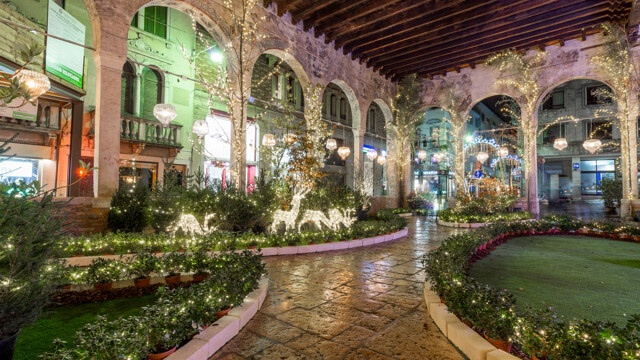