The birth certificate was legally sanctioned
by the delegation of the Italian Academy of Cuisine.

Tiramisu is one of the most famous Italian desserts, in Italy and in the world. It is part of the category of layered desserts, such as trifle: the originality of the tiramisu recipe is in the ingredients, where we find zabaglione, coffee, mascarpone, dry biscuits (ladyfingers). Tiramisu was born in Treviso, despite the various versions that have been born over time.

The ancestor of tiramisu is described in the book “The Venetian glutton” by the gastronome Giuseppe Maffioli, which talks about the tradition of consuming zabaglione together with whipped cream and dry biscuits called baicoli.
In “I dolci del Veneto”, published in 1983 by Giovanni Capnist, we find a tiramisu recipe, even if it is not called by this name, while only in 1988, in the text “La Marca Gastronomica”, we finally find the tiramisu, described as a dessert prepared in the restaurant Le Beccherie, in Treviso.

Bepo Zoppelli, academician of Italian Cuisine and Treviso delegate, has no doubts: «Tiramisu is from Treviso, it was the Campeol delle Beccherie who created it, many years ago. – he explains – It is true that perhaps the roots go back to the Middle Ages, inspired by an English soup, and that that dessert traveled to different areas of Italy. But there is no doubt about Treviso. It is true that other hypotheses about its birth then turn around, but the paternity of the Beccherie is history, consecrated by the masters of Venetian culture ».

Preparation:
Prepare the coffee and let it cool in a bowl;
Froth 12 egg yolks with ½ kg of sugar and add 1 kg of mascarpone to obtain a soft cream;
Wet 30 ladyfingers with coffee, taking care not to soak them too much and arrange them in a row in the center of a circular plate;
Spread half of the cream on the ladyfingers and then overlap another layer of 30 ladyfingers wet with coffee ‘, then spread the surface with the remaining mascarpone cream;
Sprinkle the mascarpone with sifted lean cocoa;
Put in the fridge until ready to serve.

Tiramisu has evolved over the years – some ingredients have been replaced and others have been added.

As a substitute for ladyfingers:

In replacement or in half with mascarpone:

As a replacement for egg yolks: 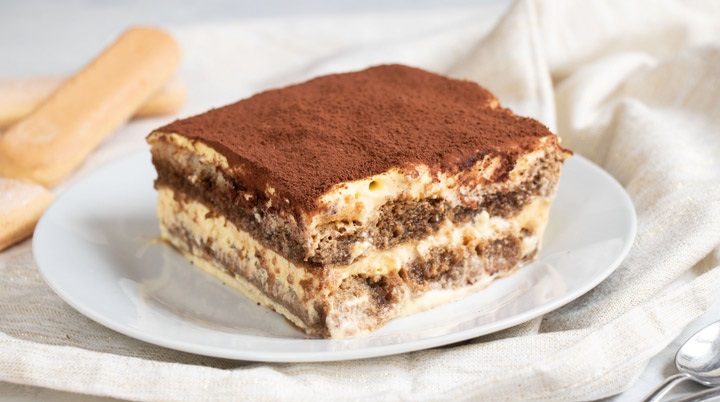