This is how the sculptor Canova dressed

How he dressed, how Canova spoke
This is how the sculptor Canova dressed

Three gala suits and a cloak reconstructed and exhibited in the Gipsoteca, the birthplace in Veneto (Possagno – Treviso): a project born in 2007 that involved students and professors from a professional institute in the area. Looking forward to new exhibitions dedicated to beauty and religion.

Madame Récamier had been very surprised when she visited Antonio Canova’s Roman studio in the ancient alley of the Colonnette: a thin little man (she would describe him later), dressed as a workman, with a bald forehead “radiant with genius” but covered with a paper cap or even a wig. Certainly nothing to do with the almost divine aura that already surrounded the sculptor at the time. But on the other hand, that was his studio, where he certainly welcomed excellent men and women, enlightened collectors and high-ranking merchants but to whom (despite Madame a lot of hammer and chisel in hand ». But there was also another Canova: the official one, the one who met the Pope or Napoleon, the one who witnessed the laying of the first stone of “his of him” Temple of him in Possagno. Exactly what (inspired by Gavin Hamilton or Colonel John Campbell) loved to show off a modern elegance, in perfect English style all played on tailcoats, undershirts and wide-brimmed jackets.

In search of the elegance of genius, the Canova Foundation of Possagno (Treviso) has now decided to re-model, reproduce and display (alongside the originals), in the living room of his birthplace, three dresses by the sculptor of Love and Psyche, of Venus and Adonis, of the funeral monument to Maria Cristina of Austria, of Paolina Borghese: the habitat à la française; the diplomatic uniform of the Knight of Christ; a brown suit with jewel buttons (plus the cape of the Prince of the Academy of San Luca). Almost a tribute to Canova’s other side, perhaps the least known and most surprising, the one that has always seemed to fascinate scholars and onlookers, perhaps pushing them to spend (as at Sotheby’s New York last June 4) almost three million dollars for drawings and other more or less private sketches by John Lennon. But also an opportunity to rediscover a house now transformed into a museum, the most visited in the province of Treviso (35,000 entries last year, 50,000 expected for 2014) and one of the most visited in Veneto: here, until 22 June, an exhibition dedicated to the Three Graces is underway and soon others will open on beauty and religion (again according to Canova). A museum house enriched by the splendid Gipsoteca (complete with a new wing designed in 1957 by Carlo Scarpa).

This time we are talking about clothes, these too, like the rest of the collection, come from the legacy of Canova’s half-brother, Giovanni Battista Sartori. Red liveries, culottes, single-breasted tailcoats with receding flaps, embroidered vests. And accessories: shirts, jabots, white stockings, black shoes, swords with mother-of-pearl handles, tubas, feluccas, Napoleon-style hats, belts, wigs and brushes. A homage in some way even obligatory, given that even the clothes of the great sculptor are still “perishable goods” while these reproductions (in some cases made with synthetic material “because it allows for brighter colors”) ensure a real and more lasting testimony at the same wardrobe. But the project that has linked, since 2007, the Canova Foundation of Possagno, the Ipsia Carlo Scarpa Institute of Montebelluna, the Amici del Canova Association does not just reveal the more fashionable side of Canova, but has broadened its horizons to an analysis of his vocabulary (one could almost say passing from the wardrobe to the library): a vocabulary rich in dialectal elements (modèl, càmis or teler) because for Canova and for many of his contemporaries “the use of the Italian language appears, even when it is substantially correct, as tiring as that of a foreign language ».

The fruit of the entire project has now been collected in a volume (Come vestiva, as Canova spoke, edited by Mario Guderzo and Giancarlo Cunial, Kappadue, pp. 176, and 15) just presented, complete with a small show (with students of Ipsia to be models). And it is positively striking that this project on Antonio Canova (1757-1822), rightly considered one of the greatest exponents of neoclassical sculpture, has been entrusted to a professional institute (Ipsia) and that it is not so much part of a course in the history of art, but in the teaching activities of the Fashion course. “Completing the reconstruction of the clothes – the Ipsia teachers who followed the students, about twenty in all, in the project explain to” la Lettura “- was not easy.

The biggest problem to deal with was that the models of these late eighteenth-century dresses are nowadays difficult to find in traditional channels and that in any case they are models and figures that are not always faithful to the original. Our luck was that we were able to open the museum case with Canova’s clothes and make the reliefs on the spot ». And there was no shortage of surprises: “We immediately realized how small his build must be because at a first try on a mannequin we were unable to put on the jacket”.

So Madame Recamier’s impression was not wrong: Canova was really a skinny little man. This is confirmed by another detail that came to light during the surveys for the habitat à la française, the first to be studied, a beautiful ancien régime dress in black woolen cloth, embroidered with silk thread with an olive leaf motif (scanned and then reassembled into a sort of collage), which the sculptor most likely used in his encounters with Napoleon. Among the many accessories of this habit (“another problem were the buttons, very difficult to reproduce”) there is also a silk shirt with rouches that served to accentuate the swelling and texture of the chest: a small sin of vanity for a great genius of beauty. 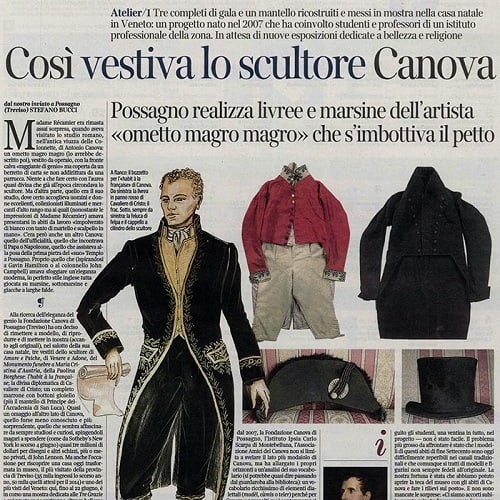