28 JUNE 2018
ARTICLES | RELEASES
Theresianer APER – IPA, an original way of “making an aperitif” with Theresianer India Pale Ale beer
On summer evenings, the desire to spend time away from home grows, to fully enjoy the longest days of the year.
Sipping an aperitif with friends also means taking the time to gratify yourself.
Theresianer suggests APER – IPA an original way of “making an aperitif”, which enhances the characteristics of Theresianer India Pale Ale by combining it with simple flakes of parmesan for tasting. The decisive bitterness of IPA, a beer with a strong hopping, is faded by the delicate but equally persistent flavor of the cheese for a perfect match.

The history of India Pale Ale begins with the intensity of the hops intertwined with hints of flowers and citrus fruits: there is a strong bitterness, which moves away from the palate to make us perceive the balanced body of this beer.
A beer for connoisseurs and enthusiasts. Its name derives from that of the famous Ale that were embarked, starting from the seventeenth century, on ships that were heading for India. Having to cross the equator and not having any type of refrigeration on board, the light Ale destined for India was produced with a higher alcohol content and above all with a strong dosage of hops, in order to allow it to better withstand the travails of the long travel.
In revisiting this style, the Theresianer Brewers wanted to repeat the glories of a traditionally intense hopping, obtaining, thanks also to the long maturation, a double result: the aroma of India Pale Ale surprises with its hints of flowers and citrus fruits, and a decisive bitterness which however tends to vanish, leaving a pleasant impression of balanced body.
TYPE: India Pale Ale
ALCOHOL CONTENT: 5.8%
PLATO GRADE: 14.7
TYPE OF YEAST: Saccharomyces Cerevisiae
TYPE OF FERMENTATION: “high”
BARLEY ORIGIN: Franconia
SUBSTANCES LOVING BEER MG / L: 45
MATURATION: At least 8 weeks
COLOR: Dark amber with orange reflections
BOUQUET: Intense, aromatic, spicy
TASTE: Determined, rich, complex
SERVING TEMPERATURE: 9-11 ° C
Recommended combinations
Baked turbot and other tasty fish and foods
Spicy cold cuts
Orange duck
Very seasoned washed rind cheeses
Club Sandwich
As an aperitif accompanied by savory snacks
On its own as a tasting beer

Ingredients for 4 people):
1 turbot of about 1.2 kg, 1 kg of potatoes, extra virgin olive oil, a glass of Theresianer IPA beer to which a few drops of lemon juice, salt, pepper, rosemary are added.
Procedure: Clean the rhombus, wash it and dry it. Insert a sprig of rosemary, a pinch of salt and a pinch of pepper into the fish. Peel and cut the potatoes into thin slices, boil them for 2 minutes in boiling water and drain. Then let them cool and place a layer on the oven plate lined with baking paper greased with oil. Season with salt and pepper, season with rosemary, add a drizzle of oil and place the turbot on top; sprinkle it with salt, pepper and more rosemary, season with a little oil and pour in a glass of Theresianer IPA. Then place in the oven preheated to 200 ° for about 35 minutes. Remove from the oven, clean the fish by removing the skin and bones, then serve with the potatoes. 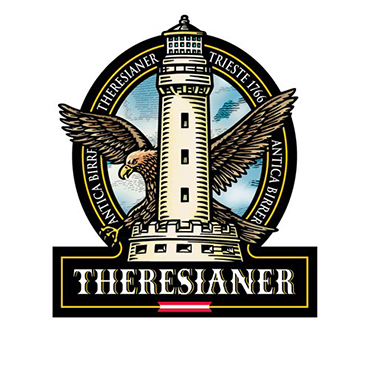