The textile treasure of the Cathedral of Castelfranco Veneto

The cathedral of Castelfranco reveals another incredible treasure, right there, a few steps from the Giorgione altarpiece, the dressers of the sacristy have returned a wonderful series of fabric masterpieces. To tell the truth, it was Gian Paolo Bordignon Favero who spoke for the first time about their existence in the 1960s. Now, however, thanks to the commitment of the parish priest Don Paolo Barbisan, the Municipal Administration and Friends of the Museums, the textile heritage of the castle has been inventoried, photographed and will be fully cataloged with the hope of organizing an exhibition soon. It is a unique collection of its kind in terms of number of pieces and richness of textile typologies, about sixty, which allow to reconstruct the history of the Church by linking it to that of the castle community. Brocades, moiré, taffeta, silks and sumptuous French fabrics forbidden at the time of the Serenissima tell the full story of a century, the eighteenth century, as explained by Alessandra Geromel, an expert on fabric: “Thanks to the reconnaissance we have been able to reconstruct the original liturgical sets, composed of chalice, stole, maniple (which later fell into disuse with the Second Vatican Council), chalice veil and envelope. Perhaps not everyone knows that the fabrics used came from donations of civilian clothes, for example from weddings, which at that time had important sizes and above all were not white.

White will be introduced only after the proclamation of the Dogma of the Immaculate Conception in 1854 “. Here then is that the trunks of the Cathedral have returned brown vestments on which stand out bright flowers, lilac, blue and purple fruit of the strictly male mastery of the weavers’ guild. But there are also humeral veils, stoles embellished with gold and silver embroidery, half-stitched and beaded alms bags, cushions and copes; for the latter (sumptuous liturgical cloaks used in processions and solemn celebrations) there is still traces of correspondence with a Milanese shopkeeper who in the nineteenth century supplied the samis d’oro. Accomplice to the good conservation of the fabrics was certainly the darkness, which allowed to preserve the original colors, important for understanding the chromatic canon of the liturgical calendar. If green was the color of ordinary times, the red that represents the blood of the martyrs and the fire of Pentecost is much more coveted. Among the modern planets, the one donated by Pope John XXIII in the 1950s is worthy of note, as the parish priest, Don Barbisan recalls: “It is a modern, white planet, given to us by the pope after a visit on the occasion of the celebrations of Pius X in 1952. Angelo Roncalli he was the then patriarch of Venice and only a few years later, in 1958, he would become John XXIII as the inscription embroidered on the fabric sent to us by the Vatican bears ».

article by Valentina Calzavara for www.gazzettino.it 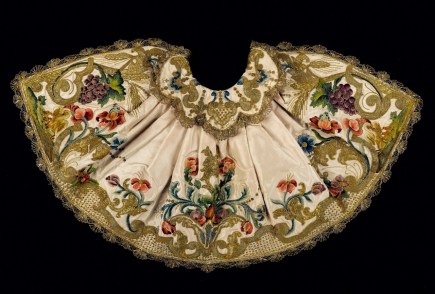