26 SEPTEMBER 2013
ARTICLES
The Rotonda di Badoere
The Rotonda di Badoere is one of the most famous barchesse in the Veneto, its peculiarity lies both in its grandeur and in its structure made to house a series of shops on a semicircle and houses on the other, with a large square for the market; the church and a dominical palace overlook the square, now the town hall. The large building is structurally presented as a long semicircular portico, formed by forty-one arches. This stupendous square presumably found its origin at the end of the seventeenth century; in fact, since 1566 the noble Venetian Badoere family boasted numerous landholdings in the area.

Originally it included two large double semicircular barchesse and 300 meters to the west the manor house which was destroyed by a fire in 1920 during a peasant tumult.
It was created by the Badoer, a Venetian patrician family who owned the land where the Rotonda was built (called Zeruol di Sopra), on a project carried out, it seems, by the Massari school. The Badoer family erected the small church (1645) dedicated to San Antonio da Padova and the Rotonda with the aim of hosting the weekly market on Monday that the Serenissima Republic authorized in 1689 to its noble Angelo Badoer. Above all, the western barchessa is original, consisting of 41 arches corresponding to as many workshops of artisans and merchants, these, arranged under the arcades, had an entrance placed inside the Rotunda and a balcony that opened upwards which served as a showcase that the recent restoration wanted to enhance.

The language chosen for the Rotonda is that of a noble and elegant classicism, with which it is intense to provide a suitable and elegant place for the important activity of the market, a place of exchange and meeting.

Beyond the street, the square is embellished by the seventeenth-century church of S. Antonio, placed on a high plinth, with a rusticated facade decorated with vine shoots. On the east side of the square, a second set of buildings arranged in a hemicycle completes the circle of the Badoere square.

The origin of the name Morgano is lost in popular legends handed down by poets. One of these tells of a girl called Murgania of such great beauty that she was adored as the incarnation of Venus and, to it, a temple was erected: the place was called Morgano. The first news about Morgano report the existence of a religious center that already in the twelfth century enjoyed a certain importance in the territory, even if the presence of a place of worship dedicated to San Martino, a saint particularly dear to Franks and Lombards, seems to date back a few centuries before the year 1000.
It became a county under the Lombards and linked its name to the family to which it belonged: the Counts of Morgano. In 1339 the Marca Trevigiana was assigned to Venice which subdivided the territory into large estates managed by the noble Venetian families. The Badoer, Basadonna, Revedine and Marcello families arrive in Morgano. The local population follows the fate of the inhabitants of the Veneto hinterland, but the presence of the waters of the Sile, the Zero, the Rio guarantee fishing and the development of agriculture and all activities related to the milling industry.
With the increase in agriculture and livestock it became necessary to establish a permanent market place authorized by the Serenissima Republic in 1689 for Angelo Badoer. To properly host the market, the Badoer, who owned land and goods in Morgano, built the Rotonda di Badoere in the locality called Zeruol di Sopra. The market took place on Mondays and soon became famous and appreciated in the district. Today the Rotonda di Badoere is the backdrop to various local and cultural events

The territory of the Municipality of Morgano must be included in the context of the NATURAL PARK OF THE SILE RIVER which aims to safeguard one of the most important and interesting resurgence rivers in Italy and all the elements that make it up, protecting areas of great environmental value.

The water richness of the Sile, Rio, Zero, the characteristic springs, the marshes (“fontanassi” and “vallasse”), the reeds, the patches of spontaneous vegetation rich in rare plant species and picturesque pools of water animated by the presence of anatidae and ardeidae that blend into the rural landscape of old typical houses, manor houses and the typical water mills still active in 1900, offer countless ideas for guided tours and splendid excursions by bike and on horseback (the sources of the Sile, the Mill of Cervara, etc.). 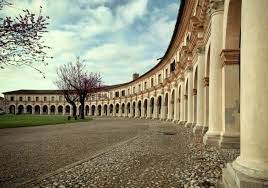