The Road of Piave’s Wines

The Strada dei Vini del Piave winds through an area close to the enchanting Venice, in a vast plain that today increasingly wants to exhibit the charm of its wide agricultural horizons lapped by the river, the precious historical vestiges and the sumptuous architectural achievements, as well as the signs and memories of the Great War.

The route winds to the right and left of the Piave, from Roncade to Portobuffolè, from Conegliano to Motta di Livenza up to Noventa di Piave and to penetrate the province of Venice, and is above all a path that leads into the heart of the rich wine and food and wine offer of Veneto Oriental. A journey that aims to promote the land and culture of the Piave starting from its wines and its agri-food productions, in view of a tourist offer that enhances the territory in its entirety: its historical, cultural, artistic, environmental, social identity and economical.

The Strada dei Vini del Piave winds mainly on the left bank of the river, striving to touch most of the noteworthy localities, producers and restaurants of this corner of Veneto still partially to be discovered.

Above all, however, the Strada dei Vini del Piave embraces a complex and fascinating cultural system where the rural vocation has conditioned history by establishing values ​​and crops, traditions and vineyards. A territory that offers itself to the most attentive tourist precisely through this new route organized to enhance the DOC Piave territory and its wines, intended not only as such, but as the result of a happy combination of soils, traditions, skills, passions and ideas .

A route of about 170 kilometers, suitably marked by directional signs, which can in turn be divided into three suggestive thematic itineraries, with the aim of understanding the various settlement moments, the different traditions and tasting wines and typical products of excellence.

The first – Le vigne dei Dogi – sees the vineyards that belonged to the Serenissima Republic of Venice as protagonists: it winds, both to the left and to the right of the Piave, in a path that starts from the elegant Oderzo and leads up to Roncade through a series of quiet towns and ancient villages, among vineyards that are always an integral part of the landscape, alternating with woods and other crops.

The second – The Villas of the Venetians – which from Roncade arrives in Cimadolmo (home of the white Dop Asparagus), leads to visit “The Villas of the Venetians” that the patricians of the Serenissima loved to build here for their “holidays” but also to manage flourishing farms, of which many historic houses are still home today The third part – The lands of Raboso – is the one that leads from Cimadolmo to Oderzo and extends into the Raboso Piave area, the only native Treviso grape variety with black berries that after years of oblivion due to its too strong character, has found new interpretations – and consequent great successes – thanks to the local winemakers, who were able to bend the slightly “rough” character of its grapes, and give life to wines that are increasingly appreciated and sought after.

The routes in detail:

THE VINEYARDS OF THE DOGES

There are many suggestions and peculiarities of this stretch that crosses the eastern Marca Trevigiana and penetrates the province of Venice, an area rich in springs and minor waterways where it is still possible to find some ancient plain wood that borders cereal crops alongside vines , or large lawn extensions. An area softened for long stretches by lush vegetation, a gateway to the hinterland for the ancient Venetians and a favorite vineyard by the nobles of the Serenissima.

To the great landscape interest of these areas are added centers of particular historical and architectural interest. Oderzo is certainly the most important, with its beautiful Cathedral and its important archaeological museum which houses precious documents of the Roman Opitergium, which can also be found among the Renaissance frescoed palaces of its elegant historic center.

Another important center is that of Motta di Livenza, with its Renaissance Cathedral and the Sanctuary of the Madonna dei Miracoli decorated by Sansovino. In Cessalto and Chiarano, moreover, two singular and splendid villas: Villa Emo-Giacomini, from the 16th century, and Villa Zeno, built in 1565 to a design by Andrea Palladio. Before reaching Roncade, a small detour leads to the Abbey of Santa Maria del Pero, founded in the 10th century: an enchanted place whose troubled history can be read in the imposing vestiges, ennobled by recent restorations.

THE VILLAS OF THE VENETIANS

Due to its proximity to the lagoon and accessibility from Venice, it was in this area – whose horizon is bordered to the north by the ridge of the Pre-Alps – that some of the first Venetian villas on the mainland settled. Starting right from the starting point of this stretch of road, the sixteenth-century villa-castle Giustiniani di Roncade, which anticipates the architectural themes subsequently codified by Palladio.

Then passing through the baroque Villa Tiepolo-Passi di Carbonera, Villa Perocco with its vineyards in the foreground, the eighteenth-century Villa Gitta Caccianiga, the neo-classical Villa Valier Loredan and the barchesse of Villa Pastega Manera, where the Japanese architect Tadao Ando he has built a workshop (in Latin “Fabrica”), a research and study center in every artistic field.

From the succession of villas and parks you exit by entering a unique area: that of the Grave di Papadopoli, where the vineyards have their roots in gravelly soils that slope down towards the Piave, which here extends into a large bed, branching off in various water flowing between pebbles and gravel. Stones, silences and wide horizons over countryside and vineyards here draw the most authentic features of an archaic bond with the land and the river.

THE LANDS OF THE RABOSO

From Cimadolmo the road proposes a crossroads, which will in any case rejoin its north-eastern section: you can continue to Ponte di Piave thus entering one of the areas of greatest wine production, or continue towards San Polo di Piave to meet the unusual and fascinating Villa Papadopoli-Giol, the Tower of the Rai Castle, the Church of the Templars of Ormelle.

And then, again, the suggestive Borgo Malanotte of Tezze di Piave, then deviate to the elegant center of Conegliano and its 10th century castle and finally – without missing a visit to the precious Portobuffolè, a fascinating example of a fortified citadel of the Serenissima, small largely preserved jewel – continue east until you return to Oderzo.

All among vineyards that often lap the roadside, where the cultivation of Raboso Piave reigns, a vine that resembles this austere and frank, evocative and nobly unique land.

The route leads through the vineyards and cellars where Malanotte is born, a DOC Superiore wine obtained with Raboso grapes partially dried in special fruit rooms. The name of this Raboso of excellence pays homage to the Malanotte family who for over two centuries (from the mid-seventeenth century to the mid-nineteenth century) supported, renewed and brought to great results agriculture and in particular viticulture, as evidenced by a guide French from the mid-nineteenth century, intended for the first travelers to Italy, which recommends tasting “le vin rouge Malanotte di Tezze” (Ernest Foerster, “Manuel de Voyageur en Italie”, Munich 1855). In many of the many wineries that we meet along

the journey, the Malanotte rests for three years, as required by its strict production disciplinary (which requires one of the longest aging in Italy). And with the Malanotte, between the ancient popular village and the popular house where the homonymous family lived, near the famous Grave del Piave with their exclusive terroir designed by the river, between echoes of ancient Roman history and testimonies of cultures that here crossed in every age, it is easy to “breathe” the culture of the vine and wine that has always conditioned local social and economic life.

Raboso Piave is a wine produced from one of the rare vines present in northeastern Italy even before Roman rule, as Pliny the Elder claims in his Naturalis Historia, stating that Picina omnium nigerrima was produced in this area at the time, a wine whose color is blacker than pitch. With the fall of the Roman Empire and with it the cult of viticulture, it is necessary to wait for Venice to extend its civilization on the mainland to find memories of this wine, much in demand both in the noble palaces of the lagoon and in the villas of the hinterland. The great diffusion of Raboso experienced a very long season, so much so that, until 1949, in the area of ​​the left bank of the Piave it constituted 4/5 of the total production of red wine. With the total renewal of the vineyards which took place between the 1950s and 1960s, farmers favored the varieties whose wines were most in demand on the market and Raboso, with its strong and decisive character, gave way first of all to international varieties. For about twenty years, however, driven by the growing interest in native vines but, above all, strongly supported by the tenacity and expertise of the Piave winemakers, Raboso is experiencing a new, extraordinary season of interest and success. 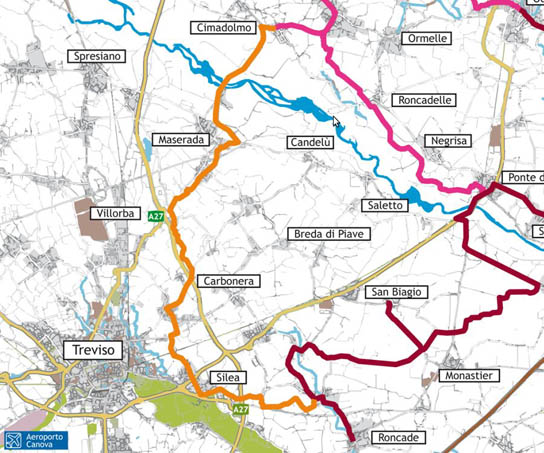