The Renaissance’s concerts in Veneto

The Renaissance’s concerts in Veneto

The review
Concerts of the Renaissance will touch small and large Venetian cities: Este, Piazzola Sul Brenta, Treviso, Portobuffolè, Farra di Soligo, Toara di Villaga, Montagnana, Fratta Polesine, Vicenza and Venice. The local administrations that will host the events have guaranteed their collaboration to welcome spectators in compliance with all safety regulations.

The event at Villa Contarini
The concert will be held in the park of Villa Contarini in Piazzola sul Brenta on Sunday 12 July at 8.45 pm. The tenor Cristian Ricci, the soprano Claudia Pavone, the mezzo-soprano Alice Marini perform as soloists in the symphonic opera program. The Filarminai Veneta Orchestra will be conducted by Maestro Marco Titotto, while the conduct of the evening is entrusted to Federica Morello. Seat reservations on Saturday are also valid for Sunday evening.

“It is a project that, in addition to the evident cultural values, represents a useful opportunity for the tourist revival of the Veneto territories – adds Ricci. An artistic promotional video of the places hosting the concerts will be disseminated on the web and the rest will be done by images, singing and the spirit of beauty that is the real inspiration of the initiative. I sincerely thank the regional councilors Federico Caner and Cristiano Corazzari for having believed in the proposal of the Filarmonia Veneta Regional Orchestra for their sensitivity. “

“This review testifies to the importance of cultural events as a promotional vehicle for the area and its hospitality industry, especially in this crucial moment of relaunching our activities – underlines the regional councilor Federico Caner -. The Region supports the Concerts of the Rebirth because it strongly believes in the value of this artistic expression, but also because through music and its places of representation, one of the best images of Veneto, of its countless and various locations, radiates nationally and internationally. extraordinary beauty. And ‘Veneto, the Land of Venice’ is synonymous with art, culture, charm and hospitality “.

“For the next three years of my mandate as Artistic Director of the Filarmonia Veneta Regional Orchestra – explains Ricci – we will adopt a new philosophy. No longer only a cultural service body for minor circuits, but also of musical representation of excellence of the Veneto Region in the world. We will bring opera and symphonic music to the territory, enhancing our musical proposal with artists and soloists of the highest level. But the real novelty – the artistic director anticipates – will be the establishment in autumn of the Filarmonia Veneta Regional Youth Orchestra exclusively as a training laboratory for young musicians that we will choose from the Venetian conservatories and that we will admit to courses after rigorous selections. A new path shared by our musical director Marco Titotto and by the president of the ORV Alberto Barbaro “.

The second edition of the review “The Concerts of the Renaissance, in the places of beauty” was presented today in Treviso, in the Green Room of Palazzo Rinaldi, eleven appointments in ten municipalities of the Veneto region, supported by the Tourism Department of the Veneto Region in collaboration with the Lyric Laboratory of Veneto and the Filarmonia Veneta Regional Orchestra.

Present at the press conference together with the Councilor for Tourism of the Veneto Region, Federico Caner, Maestro Cristian Ricci, artistic director of the event, Maestro Marco Titotto, Orchestra Director, the deputy mayor of Maser, Marco Sartor, the mayor of the Municipality of Montegrotto, Riccardo Mortandello together with the council colleague, the councilor for tourism, Laura Zanotto.

“Veneto, the first tourist region in Italy, restarts from places of beauty with a billboard that represents a journey to rediscover opera music, some of the most evocative cities and landscapes of our region, which today represent a winning combination also in tourism terms – explained the Regional Tourism Councilor, Federico Caner -. Cultural and musical tourism, in fact, have a strong attraction and Europe is undoubtedly one of the main destinations. According to some estimates, this sector represented about 40% of European tourism before the pandemic ”.

“An initiative that is in tune with the innovation and differentiation of the tourism products contained in the Strategic Tourism Plan, but also supported by the ‘CultCreate’ project which looks at music tourism, literary tourism and film tourism – he continued. ‘Councilor -. After the success of last year, I am sure that ‘The Concerts of the Renaissance’ will welcome many tourists in complete safety but

also many Venetians who decide to spend their holidays in our wonderful land and want to rediscover a great repertoire of Italian opera, a World Heritage Site “.

The favorite destination of “musical travels”, according to the CUOA Foundation is Italy, while tourists arriving in Veneto attracted by the events of musical tourism come from Germany, UK, France, USA, Italy and Japan. It is therefore clear that the tourism relaunch of Veneto also passes through the creation of events of this type, which the regional administration supports to encourage the restart of the sector.

The Venetian cities that will host the concert events will be Maser in the nymphaeum of the Villa Barbaro by Andra Palladio scheduled for tomorrow, Saturday 26 June, Montegrotto Terme in the scenery of the Euganean Hills (Tuesday 29 June), Vicenza at the Olympic Theater on the occasion of the Marcella International Lyric Award. Pobbe (Friday 2 July), Este at the secular Cloister of San Francesco (Friday 16 July), Piazzola Sul Brenta at Villa Contarini (Sunday 18 July), Fratta Polesine at Villa Badoer by Andrea Palladio (Thursday 22 July), Toara di Villaga in enchantment of the Berici Hills of Villa Piovene Porto Godi (Saturday 31 July), Montagnana at the thirteenth-century Castle of San Zeno (Sunday 22 August), Farra di Soligo in the enchanted scenery of the Prosecco Hills (Sunday 29 August), in Treviso at Mario del Monaco Theater on the occasion of the presentation of the new Filarmonia Veneta Youth Orchestra (Saturday 4 September) and again in Este on the occasion of a concert dedicated to the 1600s nni of Venice in the historic Basilica of Santa Maria delle Grazie (Saturday 25 September).

During the press conference, a promotional artistic video produced by Quanto Basta srl ​​of Treviso was presented, interpreted by the tenor Cristian Ricci and by the Filarmonia Veneta Regional Orchestra, conducted by Maestro Marco Titotto. The video, with the famous aria of “Mattinata” by Ruggero Leoncavallo, will be the soundtrack of all the scheduled events. All the shows will feature many young interpreters of the “belcanto” and internationally renowned soloists. 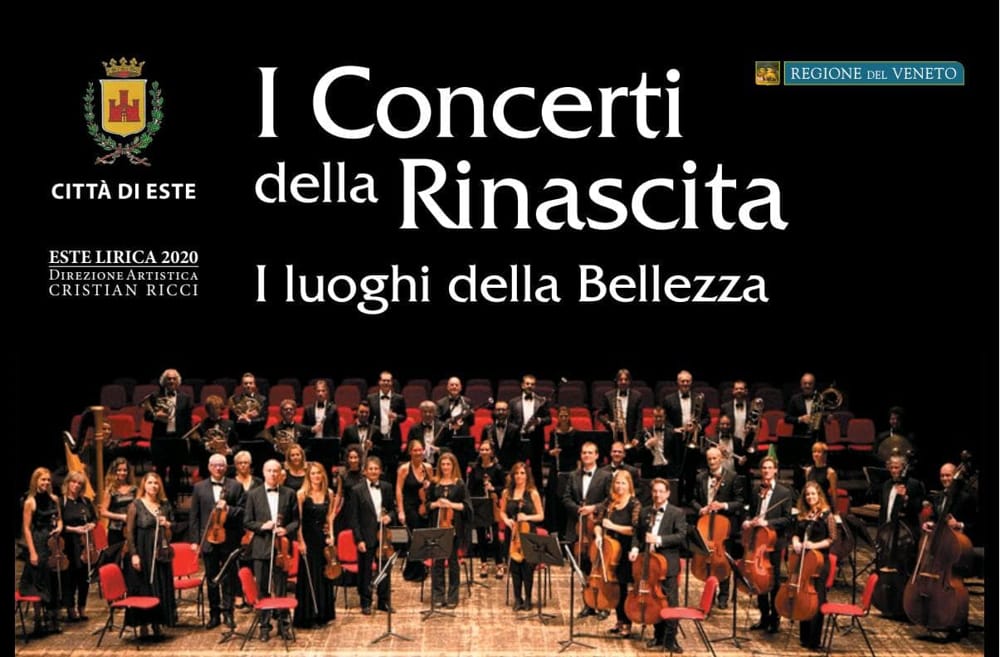