The Province of Treviso, Land of mysteries

8 JANUARY 2013
ARTICLES
The Province of Treviso, Land of mysteries
The Mysteries of the Marca Trevigiana

Welcome to the joyful Marca Trevigiana, a magnificent land full of mysteries. If you have come to discover its beauty and your curiosity is thirsty for legends and dark tales, you have come to the right place. Did you know that Treviso, together with Turin, Lyon and Prague, has been defined as a magical city since the second half of the 13th century, that is, from the time of Pietro d’Abano who taught here at the historic university? It is a story that comes from afar … There are those who say that Treviso derives from Taurisium, the name given to its founder Osiris, Noah’s successor, adored after death in the form of Taurus. But it is also said that it may derive from the depiction of a female figure with three faces, placed on one of the towers erected by Antenore to defend the new city. This is just the beginning, the Treviso lands hide the spirits of sweet girls and prelates, descendants of the Collalto and the Minucci, damned souls of the Ezzelini dynasty and again, monks wandering among the ruins of an abbey, mysterious creatures of an ancient Bosco Veneziano, not to mention the disturbing shapes of the Motte di Castello di Godego and more terrible. You can live exciting experiences and discover the secrets of Treviso, Vittorio Veneto and Castelfranco. Here you can go on the trail of Templars and other ancient knights, hunting for ghosts, but also get to know the enigmatic Giorgione up close. On summer evenings or in the first mists of autumn, you can immerse yourself among jesters and acrobats, elves and goblins, in the Middle Ages or in that of the Celts, in festivals and re-enactments that bring out ancient stories. Between history and myth, reality and fantasy …

MONASTIER
The abbey of ghosts
It is well known that the older a place is, the more it arouses the attention of historians and scholars; the more remote it is in the geography of a territory, the more it awakens the curiosity of passers-by; if we are talking about the ruins of an abbey of Benedictine monks from the 10th century, this can only stimulate the imagination of those who love to invent the lives of those who have left no trace. I find no better presentation to invite you to the abbey of Santa Maria del Pero in Monastier, one of the most mysterious sites in the Marca Trevigiana. It was founded by the German emperor Otto I instead of a river port. Imagine what appeared in the eyes of the monks: a lake and wooded expanse, which they reclaimed in compliance with the rule that combined prayer with work. Inside the Romanesque cloister, roses and hydrangeas bloomed, the erbolarius offered a variety of medicinal herbs to the apothecary monk, the vineyard gave fruit and vegetables for preserves. Of all this life, marked by prayer and small industrious gestures, there remains only a semi-abandoned scenario. The rooms of the convent no longer resound with the songs of the monks, the bell tower stands silently, orphaned by hours. But someone, passing there at dusk, still has the impression of hearing a rustle, a liturgical whisper. An impression that gradually becomes real. Then non-existent bells mark hours lost in time, the windows of the cloister begin to slam, from the door of the church a light precedes a procession of monks that goes around the square, enters the abbey and climbs a staircase that has not existed for many years. Then everything vanishes as if it had never happened, blown by the wind, swallowed by the night. It goes without saying that those who told me this story, similar to many others that have been handed down over the centuries, if they ever returned to the abbey of Monastier, did it in broad daylight under an Augustan sun. And you, what time do you intend to visit it?

The legend of the cruel Ezzelini

All castles creak with sinister noises, even those that no longer exist, but which will never disappear from legends and tales. One of these is the Ezzelini castle, built in the territory of San Zenone, home of the cruel tyrant Ezzelino III, whose death it was razed to the ground. The fortress, at the dawn of the thirteenth century, rested on the top of a hill from which still today you can enjoy a wonderful view of the Grappa massif and Montello. Ezzelino stood out for his savagery and thirst for power, which caused him many enemies, including the pope, who led a crusade against him. Ezzelino had a brother, Alberico, likewise devoted to conquest, and a sister, Cunizza, also engaged in disputes, but of a loving kind: she had three husbands and several lovers. The legends related to the castle narrate the crimes of the tyrant and the massacre of the Alberico family. It is said that Ezzelino also had the doors of the prisons bricked up without mercy for men, women and children and that the latter had their eyes plucked out. Their screams could be heard as far as the valley and, they said, their souls would cry out in eternal fear and d 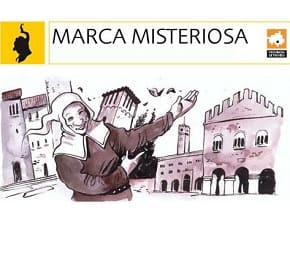