The Phantom of the Castle: the legend of Bianca di Collalto

JUNE 21 2013
ARTICLES
The Phantom of the Castle: the legend of Bianca di Collalto
Of the powerful and impregnable castle of Collalto, on the hill, a few kilometers from Susegana, only the large tower remains, part of the walls, the portals and the few houses of the inner village and one of the towers, now transformed into a bell tower. And within the highest walls there is still the base of one of the destroyed towers, with its own underground still viable, called the “Prison of the Drop”; here the enemies were imprisoned and tortured by making them fall on their heads, slowly but steadily, a drop of water.

Even today the place is steeped in a dampness that makes you shiver.

Like any self-respecting castle, the castle of Collalto also has its ghost: BIANCA, LA MURATA VIVA.

Legend has it that Count Colberto Collalto married this Chiara, of the Da Camino family, also of Lombard origin, to finally reconcile the centuries-old hatred that divided the two families and that caused endless battles and hostility. It was probably not a happy marriage, given the bad temper of Chiara, extremely jealous and irascible. For this reason, when he had the opportunity, Tolberto gladly decided to leave for the war. On the day of departure he went to greet his wife, who was combing her hair with the help of a servant, Bianca. This one of her, fond of her master, she was moved; the lady saw her tears and she also saw that Tolberto greeted the servant with one hand. As soon as the knight was gone, the perfidious Chiara, full of jealousy, had her guards take her, who walled her up alive in a tower of the castle. Obviously, upon his return, Tolbert drove out his evil wife. It is said that, since then, Bianca’s ghost appears periodically to members of the Collalto family, announcing joys or, if she appears veiled in black, announcing misfortunes.

Taken from “Unusual Guide of Veneto” by Maurizio Vittoria

In 1312, Count Rambaldo VIII obtained for himself and his descendants from Emperor Arrigo VII full jurisdiction over the counties of Collalto and San Salvatore, thus legitimizing the definitive feudal consecration of the Collalto family which has since been subjected only to imperial authority.

Artists such as Giovanni Antonio de ‘Sacchis known as Pordenone and Francesco da Milano worked in the Collaltine churches and castles from the first decade of the 1500s.

In 1806, Napoleon I, king of Italy, abolished the feudal organization and thus the Municipality of San Salvador was born, which later became Susegana.
For Collalto an inexorable decline continues, leading the capital of the now former fiefdom to become a fraction of the Municipality of San Pietro di Feletto, and then return in 1889 to the administrative patronage of the Municipality of Susegana.
The Great War (1915-1918) found the medieval village of Collalto and the fortified area, with its palaces, the fortress and the walls, under the fire of the Italian artillery which, as happened for the castle of San Salvatore, for the most part they destroyed them.
Very little remains of the castle and its walls today, as little or nothing remains of the palaces, ancient churches and watchtowers.

In 1927, on a project by the architect Domenico Rupolo, the current Church of San Giorgio was built, after the one built in 1851 (the consecration of bishop Manfredo Bellati dates back to 1857) also fell under the blows of artillery during World War I.

The Castle of San Salvatore in Susegana

The castle dominates the town of Susegana. The history of this manor, which has a typical medieval architectural structure, is linked to the vicissitudes of its owners, the noble Collalto family. Destined to become one of the largest late medieval Italian castles, the Castle of San Salvatore suffered heavy ruins between 1917 and 1918, when the municipal territory came to be in the Austro-German occupation area following the rout of Caporetto and the front was attested on the Piave river.

It can also be partially visited inside.

Susegana is known in history for the Counts of Collato, they chose the nearby hills to build their castles. The Counts of Collalto, first counts of Treviso, later of Nervesa, Collalto, San Salvatore, Rai, Credazzo, Col San Martino, Musestre, are probably of Lombard origin.

The Castle of Collalto in Susegana

A road between trees and hills leads to the ruins of this castle destroyed by Endisio I in 1110. These were the oldest possessions of the Counts of Collalto. A legend tells that Chiara da Camino wife of Rambaldo VIII of Collalto, seized by jealousy, walled up the damsel Bianca da Collalto alive; on certain nights Bianca’s ghost wanders among the ruins complaining.

The remains of the main tower, parts of the walls and the main gate are visible from the outside. 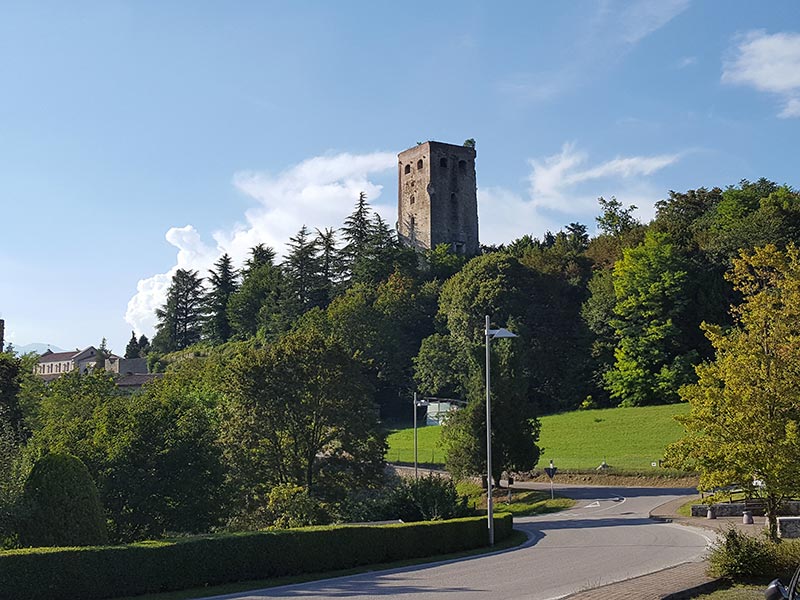