Bolasco Park in Castelfranco Veneto is the only Venetian park selected among the ten most beautiful in Italy by the jury of the 16th edition of the national competition to elect “The most beautiful park”, with the aim of enhancing the priceless heritage of parks and gardens of the Peninsula, helping to stimulate interest and sensitivity towards green in its highest forms.

Defined by experts as an enchanting romantic garden that presents an alternation of lawns, ponds, hillocks, tree groups and dispersed architecture, the romantic garden of Borgo Treviso, owned by the University of Padua, has been the subject of a restoration intervention returning to its original splendor. This is why the jury, in the motivation that supports the choice to include it among the finalists, defined it as a jewel found thanks to the intervention of the University of Padua, recalling that the splendid Hispano-Moorish greenhouse is reflected in the waters of the lake. , while in the background we find the splendid Cavallerizza, a riding arena crowned by 52 statues. The reference is to the statues forged by Orazio Marinali in the late 1600s, the pride of the arena-rider, whose beauty still shines today thanks to the restoration.

The Park of Villa Revedin Bolasco in Castelfranco Veneto (Treviso) was the winner for the “Public Parks” category of the 16th edition of the competition promoted by the ilparcopiubello.it network, which rewards the most enchanting Italian green beauties.
The award ceremony will take place in September at the Park headquarters.
The reasons of the Jury:
“Paradiso was defined as the property of the Cornaro family in the sixteenth century. The villa binds its name to illustrious personalities: Vincenzo Scamozzi, who restructured the complex in 1607 providing a new fish pond, a walled garden with regular compartments with cedar, vegetable garden and orchard; Orazio Marinali with his “hundred white statues” arranged in the Baroque period on the sides of the straight ‘stradon’; Giovanni Battista Meduna, designer of the villa, succeeded by the set designer Francesco Bagnara, a contemporary of Jappelli, protagonist of the nineteenth-century phase – with rises and depressions in the land – after the transfer of the property to the Revedins.
One of the most unique elements of the park is the Cavallerizza, due to the Frenchman Marc Guignon, dominated by two huge horses on high pedestals, once placed on the ‘stradon’: the scenic grassy arena aligns a part of the sculptures of the eighteenth-century garden along the perimeter, here repositioned.
The last illustrious name is that of Antonio Caregaro Negrin, a pupil of Bagnara and of Giuseppe Jappelli, who redesigned in 1868, for the new owners Rinaldi, the previous garden with sinuous paths surrounded by lush vegetation that take the place of the straight avenues, while the classic fish ponds become meandering lakes on which the “cavana” for the shelter of boats and, on an islet, the curvilinear Moorish Serra overlook.
The complex, passed to the Bolasco family (1924), with the donation of Renata Mazza Bolasco became the property of the University of Padua in 1967 which, thanks to an important restoration, has given life to this ‘Paradise’, while the wound inflicted on the Cavallerizza on which the massive bulk of the Castelfranco hospital looms over ”.

Enchanting romantic garden that embraces the splendid Villa Revedin, then Rinaldi, then Bolasco Piccinelli (now property of the University of Padua), built between 1852 and 1865 by Count Francesco Revedin (1811-1869) who entrusted the design to the genius by the famous Venetian architect Giambattista Meduna. The site where today the Villa and the Revedin Bolasco Garden are located was called Paradise, whose Italian garden with fish pond was razed to the ground around 1803. The current configuration presents an alternation of meadows, ponds, hills , tree groups and architectures. In the background stands the splendid “horsewoman”, a riding arena crowned by 52 statues and introduced by two equestrian statues placed above high bases. The garden is guarded by the dovecote tower at the west entrance and by the turret located near the surrounding wall to the east and containing a fresco of exquisite workmanship, also residues of the Paradise Corner compendium. About 1,500 trees currently populate the approximately 8.5 hectares of the Villa’s garden, which also includes a navigable lake with an area of ​​approximately 2.5 hectares.
A jewel rediscovered thanks to the intervention of the University of Padua and its Interdepartmental Research Center for the Restoration, Recovery and Enhancement of Historic Parks and Monumental Trees (CIRPAM).

“The most beautiful park” is a national competition that aims to enhance the priceless heritage of parks and gardens in our Peninsula, helping to stimulate interest and sensitivity towards green in its highest forms. The Prize intends to promote the culture and knowledge of our priceless heritage, to ensure that these assets are appreciated not only by a small circle of specialists, but above all by young people and by the national and international public. 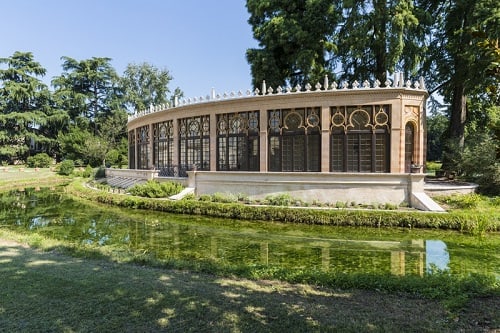