4 MARCH 2013
ARTICLES
The Parish Church of San Pietro di Feletto
The Pieve di San Pietro, a splendid work from the Lombard period, was built around the year one thousand but as early as the seventh and eighth centuries it represented the meeting place for the faithful who flocked to the numerous religious functions. They came mainly for baptism. In fact, the parish church was the only church to have the privilege of possessing the baptismal font and its territory included the towns of Formeniga, Refrontolo and Collalbrigo.
The exterior has a large portico, which probably also had the function of ensuring safe shelter for the common people during the holding of social, political and economic meetings. The bell tower, which rises isolated, with a 16th century spire, is in Romanesque style on the model of that of Aquileia. The Pieve is preceded by a 19th century staircase. There are numerous frescoes decorating the portico; among them the famous “Christ of Sunday” offended by the work done on the Christian feast day. There are about a dozen other similar works in Europe. We also remember the fresco “Madonna with Child among the Saints”, important for a very rare iconographic detail: that of the Infant Jesus sucking milk from a bladder, with which the author probably wanted to refer to the customs of the poor families of a time. Inside, the architecture is of great charm, but still essential: there are three narrow naves divided by round arches on large rectangular pillars. In the background there is a semicircular apse with overlapping layer paintings. The walls of the central nave are entirely frescoed with works by various authors and with refined hints of Byzantine taste, ranging from the thirteenth to the fifteenth century. The baptismal font chapel is very beautiful, decorated with frescoes from the end of the fifteenth century that illustrate the life and martyrdom of San Sebastiano.

The painter who frescoed the interior of the church is unknown, but he was probably an artist from the mainland between Treviso and Belluno, perhaps trained in the school of Antonio Vivarina. This is confirmed by the typology of the faces, the definition of the hair, as well as the clothes and footwear: characteristics that lead one to assume that he was also active in Serravalle and precisely in the Galletti chapel of the Church of San Giovanni Battista.

Currently the Pieve, despite its small size, offers visitors a varied and unusual artistic show.

Opening hours are guaranteed only on Sundays and on public holidays in the afternoon from 3 to 7 pm.

The Christ of Sunday

The warning from the precious fresco is clear: no work is done on Sundays.
Whoever works on the day of the Lord makes Christ suffer who, hit by the tools of work, sheds blood from his wounds. The painting is also interesting for the fact that it shows us the tools and types of work of the people of the Feletto hills.

The fresco is located on the facade under the large wooden beam portico.

Above the main door, S. Antonio Abate, S. Giacomo, the Madonna with Child and a Bishop, perhaps San Donato or San Tiziano.

On the left S. Antonio Abate and the ‘Madonna del latte’.

Dedicated to St. Peter the Apostle, it was built by expanding the structures of a previous Lombard or, perhaps, pagan artifact, of which some friezes and traces of frescoes remain. Even the architectural structure, a Romanesque gable with three narrow and high naves, with the beautiful portico on the facade and on the side of the bell tower, is quite interesting and original.

Inside, on the left walls, frescoes of the thirteenth and thirteenth century of Byzantine inspiration represent St. Peter, the Crucifixion and the stories of the nativity, but above all the imposing figure of St. Christopher, left unfinished, is impressive.

In the 1400s, the ‘Creed’, also known as the ‘Bible of the poor’, was painted on the empty part of this wall. The fresco was detached in 1957 to transfer it to the wall which remained bare because it was rebuilt after the destruction of the 1873 earthquake and the wars.

In the basin of the apse the fourteenth-century ‘Christ Pantocrator’ and traces of older figures dominate. Traces of the ‘Last Judgment’ remain on the counter-façade. The chapel of San Sebastiano with frescoes from 1470 is also interesting. The high altar, from the eighteenth century, is typically Baroque, an almost ‘standard’ model in almost all Venetian churches.

Outside, the 16th century bell tower inspired by that of Aquileia is isolated. The external staircase, towards the main road, is instead from the nineteenth century.

All the frescoes were ‘rediscovered’ at the end of the 19th century under the layer of white paint that covered them since they were judged to be ‘old’ and worn by time and as ‘cleaning’ after the various plagues. In recent times, important and delicate restoration work has also been carried out to consolidate the structures for

the effects of the earthquake of 1873.

The town, hence the name of the municipality, is located on the hilly ridge behind Conegliano called the Feletto hills and can be reached easily by several roads, the most interesting of which is the ‘Prosecco Road’, starting from Conegliano.

The municipal seat is in Rua, interesting for being structured on the buildings of an important 17th century Camaldolese monastery. The town hall contrasts with the church in the large square on the esplanade of the hill, surrounded by the houses of the hermitages, with a splendid and panoramic scenographic effect.

The name of Feletto seems to derive from the exuberant wooded situation, therefore also full of ferns (felicetus = place of ferns), typical of those hills in Roman and Lombard times. 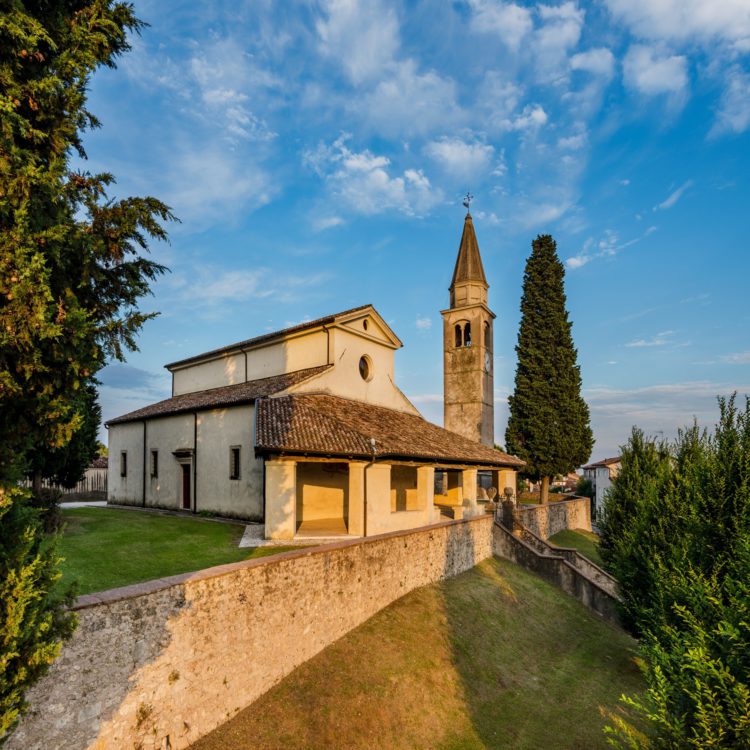