The mystery of the treasure of Monte Altare in Vittorio Veneto

15 JANUARY 2020
ARTICLES
The mystery of the treasure of Monte Altare in Vittorio Veneto
Eight hundred prehistoric finds never exhibited
The Superintendency has been waiting for decades
a plan for the safety of the Cenedese museum
before giving authorization
There is a detective story that fascinates the Vittoriesi: where did the treasure of Monte Altare go? These are some bronzes depicting warriors, some gold leaflets, fibulae, coins and the so-called sortes, tablets with engraved numbers used for divinations, which the Cenedese Archaeological Research Group discovered between 1989 and 1991 he found by digging on the top of Mount Altare, where 2500 years ago there was a place of worship frequented mainly for predictions, according to some one of the most important sanctuaries in Italy dedicated to cleromancy. In all 800 exhibits, of varying importance.
Giorgio Arnosti, one of the most authoritative archaeologists, held a sold out evening in the library in Ceneda, with dozens of people who, remaining outside the door, had to leave. A participation never seen even for the most attractive of political events. It is known that the finds traced by the Group were handed over to the Superintendency and that the latter would have partially returned them. And which would be in storage at the Museo del Cenedese, invisible because a worthy exhibition has not yet been provided. “There is a scientific committee of archaeologists who have done a whole job of cataloging the finds – explains the councilor for culture Antonella Uliana -. Now everything is blocked by the Superintendency. ”The reason? “There is a question relating to the structure of the Cenedese Museum, in its archaeological section – continues the councilor -. A question that concerns, for example, the security system. I hope the section can be opened when these aspects have been resolved ». The Archeocenedese Group is also awaiting rapid developments. Meanwhile, there are those who protest. “All this material at the time was acquired by the Superintendency, with the proviso that he would return home when the Victorian administration had set up an adequate museum hall – declares Michele Bastanzetti -. Well, in thirty years successive victories have not been able to guarantee the return of these finds “.
“Monte Altare is a beautiful visual example of a” castelliere “, that is, a fortified protohistoric settlement on the high ground or an oppidum,” explains Arnosti. In an ancient landfill near the top, perhaps for sacred use, a considerable amount of ceramic fragments of domestic vases dating back to the final phase of the Bronze Age (about 11th-10th century BC). Fragments of domestic pottery from the Roman era were also collected: fragments of amphorae, embryos and tiles, terracotta cubes of rustic flooring. «The insistent voice of collecting bronze materials prompted us to deepen the investigations – Arnosti points out – and after the first recoveries of votive materials, the Archaeological Superintendence for Veneto authorized two campaigns of essays on the hill. It is in this phase that among the bronze finds we found a pin with an onion head and a stem decorated with a spiral thread, from the 9th-8th century. BC, together with a bronze awl ». And then numerous, other material. evidence of the Iron Age The city has an endowment of exhibition halls that are second in proportion only in Venice, yet the proto-Venetian treasure still has no space

The city of Vittorio Veneto has an endowment of museums and exhibition rooms that is unmatched, after Venice, in relation to the population. Even a dozen. The archaeological part is under lock and key in the warehouses of the Cenedese, but it is not certain that it is all that should belong to the city. In short, it is not known whether the Superintendence returned all the materials it had acquired at the time. The memory of the exchange of artifacts between the various administrations that succeeded each other in the city and the Superintendency itself, has been lost over the years. Years ago, the Municipality had prepared a furnishing project, entrusted to an expert, which had rejected by the Superintendency. A museum proposal was also made by the Cenedese Group. But everything has stopped, also because there is a need to find the necessary resources to use the plant.

Among the material awaiting display case, there are some bronze male figures, recovered by archaeologists on Mount Altare, small in size, about 4-6 cm in height, which fall into a very common category of votive finds in the Proto-Venetian area. in the late Iron Age. They depict a naked male character, probably a warrior, with a very pronounced sex, with legs slightly apart. The right arm is raised as if to hold a spear in a waiting position (and in fact, very elongated triangular blades suitable for this function have been collected); the left arm is bent downwards at the elbow as if to hold a shield in thin quadrangular or rectangular sheet. Those that have been called sortes are also valuable. These are particular plates, small plates used for mantic or divination use, or for practices connected with the draw. There are engraved figures, or more precisely signs interpreted as numbers. Archaeologists have also discovered native gold foils, a precious gift from some wealthy possessor or military rank, they are of various types. Archaeologists from the Cenedese area also collected several silver coins, about a hundred, so-called Volcae Tectosages. They are very common offerings in Noricum, which present on the reverse the cross known as the Tectosagi, which according to some, would be a modification of the typical rose of the coins of the Greek colony of Roda in Iberia. On the other hand, it has been shown that the Noricum oboles – the Victorian archaeologists testify – derive precisely from the oboles of the Greek colony of Massalia, with a specimen present precisely at Monte Altare. On the obverse those coins are anepigraphs; and sometimes there are represented naturalistic heads with helmets (tribal chiefs?), or figures of fantasy, more often than simple globes.

articles by Francesco Dal Mas for www.tribunatreviso.it of 14.1.2020 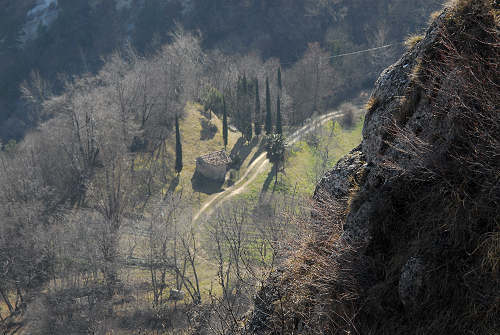