Posters: The history of Cinema. Till May 2022

In Treviso, an exhibition tells the most beautiful posters in the history of the big screen through the work of the last “painter of cinema”, the great Renato Casaro.

Among the artist’s professions, the poster designer of films or, more romantically, the “painter” of movie posters is perhaps one of the least known and most fascinating.
A work born after the war, when the majors began to produce films for the big screen exporting the “American dream” all over the world, which is completely based on manual techniques, such as pencil and tempera, until the advent of computer graphics.

If the Italian school of film posters is the most famous in the world, the Treviso-based Renato Casaro, according to the most important directors, from Sergio Leone to Giuseppe Tornatore, up to, more recently, Quentin Tarantino who wanted it for his latest film, is the spearhead.

To him, 1500 posters behind him, a life (extra) lived in Rome, Hollywood, Monaco and the Costa del Sol, the exhibition “Renato Casaro, the last poster designer of cinema. Treviso, Rome, Hollywood ”with which he inaugurated the new National Museum of the Salce Collection in Treviso on 12 June last.

The retrospective, set up in three evocative locations – the new Salce headquarters in the former Church of Santa Margherita, the San Gaetano complex and the Santa Caterina Museum, part of the civic museum – tells, through posters, drawings, study sketches and the “originals”, or the finished work that was used to print the poster, over 170 of the most important films in the history of cinema.

Casaro, born in 1935, a champion creative genius, is one of the artists who most innovated this form of art. Thanks to his talent in drawing, he began to create the “silhouettes” for the promotion of films in Treviso cinemas, and, prompted by an immediate and positive response, in 1954, at the age of 19, he left for Rome where he worked at the famous Augusto Favalli until 1957 when he opened his studio, starting a dazzling career.

Filming is my hobby. My hobby is the trade. The profession is my life. And my life is a technicolor and cinemascope film. (Renato Casaro)

In 70 years of activity, Casaro has worked with the greatest directors of cinema, from Jean-Jeacques Annaud to Ingmar Bergman, from Bernardo Bertolucci to Luc Besson, From Francis Ford Coppola to Sidney Lumet, from Sergio Leone to Giuseppe Tornatore.

The exhibition, curated by Roberto Festi, Eugenio Manzato and Maurizio Baroni, begins with Casaro’s first works, especially for the genres currently in vogue at Cinecittà such as historical films, comic films, horror films, the mythical Italian westerns. . This last trend in particular will bring him a lot of luck, so much so that he will often collaborate with Sergio Leone and his unforgettable cult, such as the re-edition of The Good, the Bad and the Ugly. It is the start of his international career and, after a start with brush and tempera, the artist perfects himself more and more in the airbrush technique, which allows him to achieve that hyper-realistic rendering that, together with his skills as a portraitist and compositional genius, he will make him work with all the greats and make some of the most famous blockbusters of the 90s.

In fact, some of the posters that have changed the history of cinema are his signature, such as that of Nikita, whose composition – the bloodstain in the foreground with the elegant silhouette of the spy on his back on a different parallel plane – is according to many critics one of the most significant of the modern era, but also Once upon a time in America, Tea in the desert, The last emperor, Dances with wolves, Rambo, 007 Never say never, and many others.

The exhibition also offers the opportunity to visit the beautiful new headquarters of the National Salce Collection Museum, the second largest in the world of advertising posters after the Musée de la Publicité in Paris with over 50,000 posters perfectly digitally cataloged and available on the Cultural Heritage site. . The Museum, housed inside Santa Margherita, dates back to

in the thirteenth century, is the result of an important conservative restoration work, led by architect Chiara Matteazzi, who saw the former church as the protagonist of an avant-garde architectural project.
A huge reinforced concrete vault was, in fact, built in the center of the main nave to house all the precious posters of the Collection, also ensuring their perfect conservation.

Above the spectacular , a panoramic terrace hosts temporary exhibitions, offering an unprecedented view of the original valuable architecture of the structure. The beauty of the museum experience is completed by a digital art narration, created by the Pepper’s Ghost studio, which immerses the visitor in the posters and music of the most famous films, also giving the opportunity to have fun with multimedia stations and an interactive digital waterfall with immaterial water that “gushes” from the vault to symbolize its creative flow.

The magic of the big screen is really all here, among the features of the stars made immortal by the hand of Renato Casaro, the last painter of cinema.

Useful info
The exhibition will remain open until May 2022.
Salce National Collection Museum
Museum Canta Caterina
Antiga graphics for the purchase of the beautiful exhibition catalog. 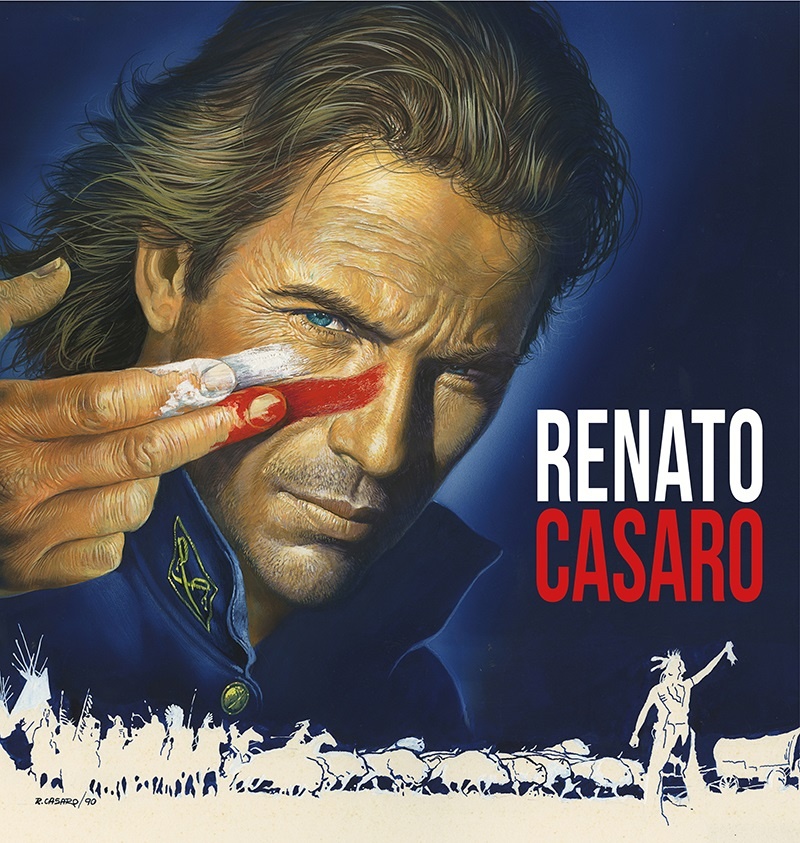