The potato, solanum tuberosum L., is a herbaceous plant with an annual cycle; in the underground part of the stem numerous tubers are formed which differ in size, shape, depth, color and shape of the buds, color of the skin and pulp.

The leaves are bullous or smooth and contain solanine a poisonous substance.

The vegetative phases are: emergence, growth, tuberification, flowering, swelling and maturation of the tubers.

The potato has nutritional properties similar to those of cereals, so much so that it has taken its place in times of famine.

The proteins are of high biological value, better than that of wheat or other grains, but the quantity is rather scarce.

Recent analyzes have also indicated a consistent value of antioxidants in the Montello potato.

The tradition wants that in the five municipalities of Montello (Crocetta del Montello, Giavera del Montello, Nervesa della Battaglia, Volpago del Montello and Montebelluna) and more precisely in the hamlets of Biadene, Caonada, Venegazzù, Selva, Bavaria, Santa Croce, Santa Maria della Vittoria, Pederiva and Santi Angeli the potato, introduced at the beginning of the 19th century by the Napoleonic troops, only found widespread diffusion starting from 1890.

During the twentieth century, new selected varieties were introduced and the results appeared so happy that the “Potato del Montello” is sought after and requested by many who live far from the production area, even by the Venetians who like to come to this hill to taste the food specialties offered by the many restaurants in the area.

The success enjoyed by the Montello potatoes is mainly due to the nature of the soil, of a Mediterranean red color, ironized by dissolution of limestone, clayey so it retains moisture for a long time and ideally accompanies the maturation of the tubers. The climate is temperate sub-continental with average rainfall around 1000 mm / year.

Since 1996, the “Potato del Montello” is marketed with a registered trademark at the Treviso Chamber of Commerce and applied to each package, as required by a strict disciplinary managed by the “Amici Bosco Montello” group and a consortium is being set up for the their enhancement and to obtain the PGI from the European Union.

Every year, on the second Sunday of September, the Montello Potato Exhibition-Market is held in the building of the former school of Santa Lucia, Presa 18 sul Montello, in the municipality of Montebelluna. Finally, it should be added that the notoriety of this product has been underlined by many gastronomic magazines, precisely because of their suitability to be prepared in many ways, from creams to mashed potatoes, from gnocchi to chips, boiled, roasted, etc. accompanying all dishes of Italian cuisine, both traditional and modern.

a thousand flavors in the kitchen

Its varieties and qualities increasingly appreciated by chefs

Desirèe, Lisetta, Monnalisa, therefore Bintje, Kennebec and Ratte are the names of the varieties of the “Potato del Montello”, and each is suitable for different uses in the kitchen. And it is increasingly appreciated by diners and transformed by chefs, thanks to its qualities and varieties. The history of the Montello potato is ancient given that it was introduced in the early nineteenth century by the Napoleonic troops and since 1890 it has been cultivated in the territories of the municipalities of Crocetta, Giavera, Nervesa, Volpago and in the hamlets of Biadene and Caonada de Montebelluna. The production land is clayey and ferrous over an area of ​​over 40 hectares divided into the various types of product. The Bintje, medium late with yellow flesh (irregular shape) is good for all uses; the late Desirèe yellow paste and reddish skin (which can be kept over the winter) is ideal for fried and sliced, the Monnalisa, medium early with yellow paste suitable for all uses, the Lisetta, early yellow paste to be consume before the winter for each use, the late Kennebec with white paste, large size, excellent for mashed potatoes and gnocchi, and finally the Ratte, medium early with yellow paste of small size excellent in the oven.

Marketed since 1996 under the registered trademark «Patata del Montello», production and sale are regulated by strict regulations, while the Montello potato consortium «Carantina» (referring to the Venetian name of the red earth) was born last March del Montello, «el carant»). 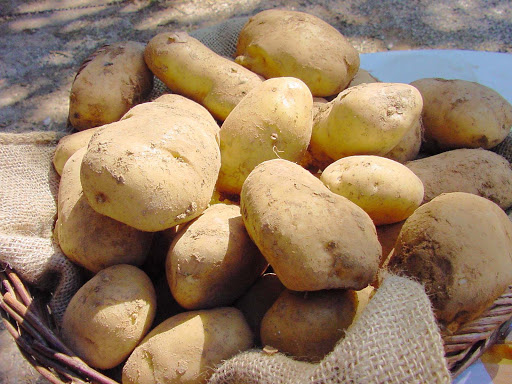