Last night at Ca ‘del Poggio the proceeds of the trip from Italy were delivered to France which led five cyclists from Treviso – Piero Chiesurin, Filippo De Luca, Luca Dell’Armellina, Giandomenico Santarossa and Romeo Bissoli – to ride up to the Mûr- de-Bretagne

Yesterday evening, exactly one month after the end of the “Great enterprise”, on the occasion of a gala evening at Ca ‘del Poggio, the Fortissimi team handed over to the Italian Progeria Sammy Basso onlus association, AIPro.Sa.B., the proceeds of so much effort: a check for over 29,000 euros (29,380.02 euros, to be precise) which will finance research on progeria, the rare premature aging syndrome suffered by the 25-year-old from Vicenza.

“I thank all those who have worked for the success of what, rightly, has been called the ‘Great Enterprise’: the Fortissimi team who spent hard work and sweat to complete the seven stages from Italy to France, but also the organizers , the sponsors and those who, through spontaneous donations, wanted to participate in this splendid adventure by purchasing part of the 1700 kilometers of the journey from the Muro di Ca ‘del Poggio to the Mûr-de-Bretagne. Thank you for believing in these formidable cyclists and in their mission, “said Sammy Basso on the occasion of the delivery of the check.

Among those present at the evening, the cyclists Sacha Modolo, Andrea Vendrame and Davide Cimolai, the former pro ‘Franco Pelizzotti, the mayor of San Pietro di Feletto, Maria Assunta Rizzo, the regional councilor Tommaso Razzolini, the director of the Association for the Heritage of the Prosecco Hills of Conegliano and Valdobbiadene, Giuliano V Advantages, and the representatives of the partner companies and associations of the “Grande Impresa”.

“The Big Business – commented Giuliano V Advantages – is an important project that testifies to the attention of the territory to support the Italian Association of Progeria Sammy Basso onlus. United we win and seeing that this project has united so many people towards a single goal is very important. As an Association we want to thank the organizers for having involved us in this great initiative “.

“The knights with a vertical smile”, defined them Sammy Basso. Their typical day, during the “Grande Impresa”, included wake up at 6.30, breakfast at 7 and departure by bicycle at 8. At 6.30 the end of the stage, at 20 the Instagram connection with Sammy Basso, at 20.30 dinner and at 21.30 the longed-for rest. The numbers of the Big Business? 1,704 kilometers traveled, 14,451 meters the total difference in altitude, 62 hours and 25 minutes the time spent cycling, 243 kilometers traveled on average every day, 27 kilometers per hour the average speed held daily.

At the top of Mûr-de-Bretagne, the five cyclists from Treviso were welcomed by the highest authorities of the nearby city of Guerlédan, starting with the mayor Hervé Le Lu. An arrival with all honors, before moving to the town hall where the party continued in an atmosphere of great cordiality and where Piero Chiesurin, “captain” of the “Fortissimi Team” handed over to the mayor Le Lu the third trophy made by maestro Marco Varisco and sent to French friends from the city of San Pietro di Feletto. Previously, similar works had been delivered to the authorities of Orleans, a city twinned with Treviso since 1959, and of Epernay, the heart of the Champagne region, sealing the symbolic encounter between the Unesco territories of Prosecco and the precious French wine. Many have followed the journey from Italy to France from a distance via social media. And in the end, the generosity of companies, associations and simple enthusiasts has produced tangible help for research. Solidarity triumphed over the ideal goal of Mûr-de-Bretagne. 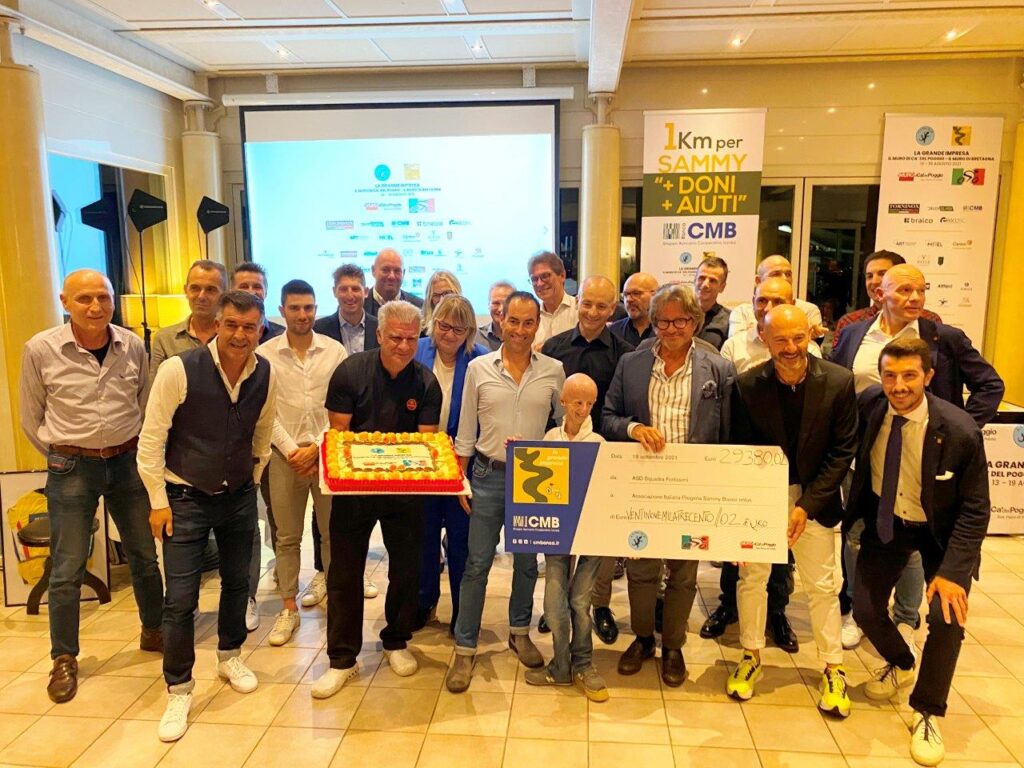