The Grand Finale of the International Artisan Gelato Exhibition

The 61st MIG – International Artisan Gelato Exhibition of Longarone Fiere Dolomiti (Belluno) closes with a grand finale animated by the final phase of the 51st Gold Cup and the awarding of numerous prizes.

The management of Fiera di Longarone is satisfied with this MIG celebrating an unexpected recovery until a few months ago. For the President of Longarone Fiere Dolomiti, Gian Angelo Bellati “the 61st International Gelato Exhibition ended today, the oldest in the world which demonstrates that Longarone and the Dolomites represent the heart of this fabulous cold dessert, known and appreciated throughout world. We achieved an excellent result considering the huge difficulties due to the health emergency, especially taking into account the number of companies present and their satisfaction as exhibitors. In fact it was a b2b fair, there were many meetings between companies and the objectives achieved by the companies were of a high level, due to the number of contracts signed and the number of products sold. A great success that prepares us to organize and manage the next edition of 2022 even better, hoping to be finally out of the pandemic. It will be an international fair, which will involve more and more companies from abroad such as Germany, Slovenia and Croatia that have managed to participate this year despite the terrible health situation that is affecting their country. Our mission for the next MIG: to become ever greener, more attentive to environmental sustainability, always open to the pastry and chocolate sectors. This means that it will be a lively fair that wants to grow and that we will see in action next year. Thanks to all the companies present and a great wish for success for Longarone, the Dolomites and the whole team of Longarone Fiere ”.

As usual, the President of the Province of Belluno and Mayor of Longarone, Roberto Padrin, took the stage to present the final ceremony, recognizing this as “the most difficult edition of the International Gelato Exhibition in history. We have had positive feedback from exhibitors despite the lack of many ice cream makers from abroad due to Covid. We can finally say that we did it above all to send a positive signal of relaunching the supply chain, to start off again in 2022 with a great MIG that will return to the glories of the past. We believe in it and we will work right away, starting tomorrow, so that the Gelato Exhibition remains and continues to make Longarone the world capital of artisan gelato “.

In addition, the Coordinator of MIG 2021, Dario Olivier was keen to underline that “the Coppa d’Oro competition that awarded the best ice cream makers in the world with the Lemon Taste has just ended and we are very happy to be back again with great courage and determination. A particularly heartfelt thanks goes to all the companies present for having believed in MIG and to the visitors who honored us with their presence. A warm thanks also to the organizers of the competitions and see you all for the next edition of MIG (27 – 30 November 2022) “.

A Dario Olivier who has been particularly busy in recent weeks also as President of Uniteis e.V., having brought the Union of Italian Gelato Makers in Germany to the elective General Assembly this morning in the Meeting Area of ​​MIG. The newly elected Council then appointed the new president: Stefano Bortolot, in the first meeting in the Boardroom of Longarone Fiere Dolomiti.

The award ceremony of the various competitions was very popular. The prizes of the 19th “Gelaterie in web 2021” competition, reserved for the best online presence of the gelato parlor, were also delivered. This year the winner was Gelateria Duomo dell’Aquila, preceding Gelato Village in Leicester (United Kingdom) and in third place Gelateria Rigoletto in Milan.

This will be followed by the proclamation of the 1st MIG GREEN Award for the most sustainable exhibition at the fair. The MAP3 Studio SRL of Ponte nelle Alpi (BL) was awarded, which best interpreted the spirit of the competition. The motivation of the Jury, chaired by the Director of Confindustria for the Environment, Giovanni Viel reads: “For proposing an entirely green stand, produced with entirely reusable and completely renewable materials and the raw material at km 0, deriving from the enhancement of ancient wood and other elements based on materials that express a sophisticated circular economy. The rustic style therefore lends itself to a proposal of purely mountain activities, but also a strong provocation for other furnishing solutions in different environments “. The jury also wanted to point out three companies, however deserving: PRODUCTS STELLA SPA, FABAR SRL and VE.CO.GEL SRL for “the evident effort in offering their customers eco-compatible products and, at the level of construction of the stand, a research of solutions and materials that are easily renewable and reusable on other occasions “. The 61. MIG ended with the 51. Gold Cup, or the world Oscar of artisanal ice cream, this year centered on the Lemon flavor. First place was won by Curzio Baraggi from the “Prossima Fermata” ice cream parlor in Milan. A success decreed by the international jury of the final six-party stage, coordinated by the heads of the Association of Italian Academic Artisan Gelato Makers. Behind him were classified in the order Roberto Galligani of the “Casa della Gelato” of Albenga (SV), Andrea Cabano of the “Stella Marina” ice cream parlor in La Spezia, Maria Kaizer of the “Casa di Maria” ice cream parlor in Assen (Netherlands) , Thomas Infanti from the “Antiche Tentazioni” ice cream parlor in Padua, who was also awarded the prize for the best classified Under 35, and finally in sixth place Davide Pasquale Moretti from the Impero ice cream parlor in Verona. 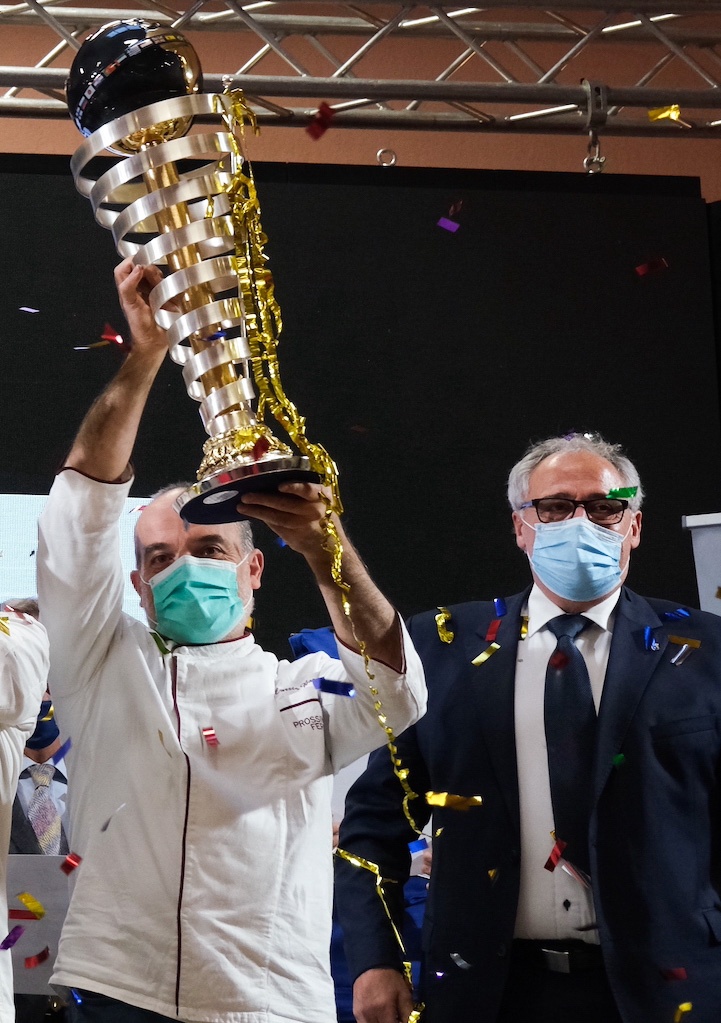