The Castelir or Castelat of Villa di Villa in Cordignano.

The hill has a truncated top forming a concave, rectangular plain, with an east-west orientation, delimited by a stone frame. Castelir derives from the Latin “castellarium” term with which the Romans indicated the masonry buildings that they saw erected between the Veneto and the nearby Friuli Venezia Giulia. Other sources claim that the Castelir was owned by a population originating from Istria who reached Cordignano and came into contact with the ancient Venetians. An archaeological study on site, from the 1980s, has brought to light many artifacts from various eras. In 1983, a two-meter-wide foundation was discovered consisting of stones arranged in a certain pattern. To the east rises an embankment formed by the earth removed from the top. Given the state of Castelir and the limited information available, it is not possible to establish with certainty the original features of the building.

The castelir is located in via Col Alt, Cordignano.

Taken from COLLE CASTELIR. A POSSIBLE ARCHAEOLOGICAL PARK
of Sante Gai of the Archaeological Group of Cordignano

The Castelir hill has an altitude of 353.6 m. It is located north-east of the Treviso Pre-Alps, on the slopes of the Cansiglio, in the municipality of Cordignano in the province of Treviso (fraction of Villa di Villa). Castelir derives from the Latin “castellarium”, a term with which the Romans called the buildings built for defensive purposes on the tops of some hills, dating back to the Bronze Age. Its origins date back to about 100 million years ago and is composed of fossils of marine organisms, such as corals, molluscs, algae and protozoa, fixed and deposited on the seabed and which gave shape to the coral reef that later emerged due to the northward displacement of the African land plate towards Europe, forming the Cansiglio mountains by raising them up to Monte Cavallo. The calcium carbonate of which the hill is composed is currently exploited both by the municipality of Cordignano through tunnels dug into the rock, and by the municipality of Caneva with open-air quarries that have created a huge hole in the hill, the cause of currently unstoppable environmental degradation. .

The Castelir is the most advanced point towards the plain of the entire north-east foothills, in fact it is visible from the Dignano bridge over the Tagliamento river and from the west over the Piave river from Montello. There are few houses built on the hill and they are mostly located on the north-west side, because on this side the slope descends more gently. Only one building is located near the top, once a farmhouse, now renovated and used as a residential home. The hill was used by man mostly for grazing on the slopes and in the small meadows created on hollows and terraces by man built since ancient times, enclosed by dry stone walls to delimit the properties, to stop any run-off or to support of terraces. Currently, after the abandonment of man, many plants grow abundantly on almost the entire hill. On the south-eastern side there are woods and bushes of hornbeams, acacias, oaks, beeches, hazelnuts, junipers. On the north side there are chestnut woods. To the west towards the top and near the abandoned “casere”, vineyards of exquisite grapes and trees of a wild quality of black fig, once a source of income for the inhabitants, and dogwood have been planted. Currently, the olive tree is also cultivated towards the south, recognized as a valuable quality.

The hill is now populated by a rich variety of wild animals, there are: roe deer, foxes, hares, badgers, harmless snakes and many birds including some birds of prey such as small hawks and buzzards. Below on the walls of the quarries there are some barn owls. All this makes Castelir a wonderful habitat. This hill has always been inhabited and venerated by man since ancient times, both for its strategic position and for the mild climate even in winter, and for the many springs that flowed from its slopes. Numerous artifacts have been found, from different historical periods. The first findings date back to 1885 by Dr. A. Dal Bon, who reported that he had found pottery shards, vaulted bones, flint arrowheads and a bronze idol from the Celtic era on the Castelir. on the spot, various artifacts were collected: Roman coins and laminas depicting cattle and horses and 4 bronzes symbolizing naked warriors, a considerable amount of archaeological material that will identify the site as a “Votive Stipe di Villa di Villa” from the Paleovenetian era ( now visible in the Museo del Cenedese di Vittorio Veneto), ceramics from the Bronze Age and Iron, human skeletons with funerary equipment from the Early Middle Ages, which go into the news as the Sepolcreto di Stevenà, remains of dry stone walls 1.50 meters thick and it is assumed that they belonged to a defense structure of an era not yet identified. The professor. Romano Giuliano in a study of the castellieri has identified in the center of the esplanade on the top of Castelir a composition of limestone stones arranged in the shape of a triangle whose imaginary line starts from the tip and crosses the base in the middle continues straight up to the embankment built to the east of the summit: at this point the sun rises on the winter solstice. On the votive site, archaeological materials belonging to ex-votos from the Paleo-Venetian and Roman times have been found.

–
The excursion
Path 1060 / A – Path of the Patriarch
The itinerary, or rather the itineraries since the paths 1060 and 1060A are described, follows the road that starting from Sarone (Caneva) reached Cansiglio and Alpago. The part that crosses Cordignago originates outside the town of Villa di Villa, at the level of the Faidel road and allows you to see the ruins of the Castle of Cordignano, known as Castelat. Leaving Col Castelir on the left, you will arrive in loc. La Mar and cross the paved road to reach the “Pojat”, an open space where a typical environment of the time of the charcoal burners has been rebuilt. Go to Coll’Alt and then descend along Lama Lunga to Pian Posocco. After 400 m from M.ga Salamina, turn right and pass C. Bianca; entering the provincial road of Cansiglio you reach the ruins of the Castle of Cordignano

Natural Landscape: The path allows you to wander with a view of the Coll’Alt up to Trieste and Grado and the Carnic Alps. The landscape is characterized by large cultivated areas and an increase in wooded areas. Presence of hornbeam, downy oak and ash. Downy oak wood was used for the construction of railway sleepers and beams. Processing in the furniture industry is made difficult by the fibers that are too twisted and gnarled

Further information: The route follows the ancient road known as the “Patriarch’s road”, so named in honor of the patriarch of Aquileia Raimondo Della Torre who had it built. Until 1500, the road constituted an axis for the pedemontana commercial viability. The Castle of Cordignano was built during the Lombard domination and was devastated by a fire in the Turkish raids. The toponym castelir derives from castelliere, which indicates a prehistoric fortification built for defense purposes. Fragments of terracotta and ceramic pottery were found. 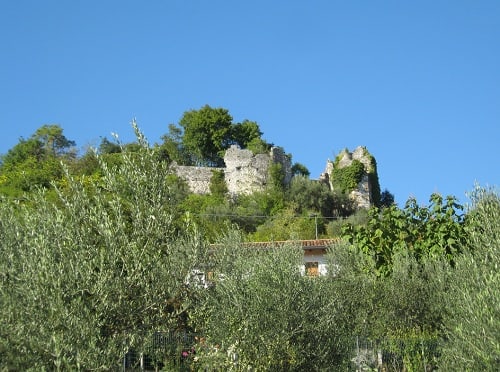