The boom of the “green economy”: the dream job for one out of two young Italians is on the farm

The boom of the “green economy”

Coldiretti-Ixé research: 32.7% of Italians would like to return to live in the countryside, where they hope to find new opportunities and a better quality of life

In the photo: a young man at work during the harvest

Anzianotto, with a low level of education and linked to traditional production concepts. If you have this idea of ​​the Italian farmer, forget it. Almost one in three companies born in the last decade is young. 6.9% of the holders are under the age of 35 and over 30% of them are graduates. They manage 54,480 farms which, in 70% of cases, carry out multifunctional activities: alongside the cultivation of the land there are agritourisms, educational farms, direct sales of products or their transformation in the company to produce cheese, wine, oil, but also bread, beer , cured meats, ice creams, cosmetics. Activities started perhaps as collateral which, developed thanks to the internet, are becoming more and more driving.

They are the backbone of the Italian “green economy”, a sector that – while Italian food spending has collapsed to a minimum in 33 years – is constantly expanding: in 2013 it had a turnover of almost 20 billion euros, an increase of 65% compared to to 2007, the first year of the crisis. In 2013 there were 15 million Italians who, at least sometimes, did their shopping at the farmer, on farms or in farmers’ markets, often in one of the 9 thousand farms of the Coldiretti “Campagna Amica” network, with a tour of business of 3 billion euros, up 25% year-on-year. On the other hand, 7 million participated in the «Gas», solidarity buying groups, to obtain supplies directly from producers, often at zero kilometers or almost. Organic foods always last year had a turnover of 3.1 billion (+ 8.8%) and 45% of Italians put them in the cart, regularly or at least every now and then.

It is a sector that pulls, creates jobs and wealth. Coldiretti, in the dossier “Working and living green in Italy”, presented Wednesday in Florence on the occasion of World Environment Day, estimates the new jobs that the green economy can create in the next three years at 100,000. There are opportunities for those who want to earn something with a seasonal experience in contact with nature, as about 200,000 young people already do every year during the summer, but also opportunities to do business.

Moreover, if until ten years ago the work of the farmer was little considered and the ambitions of young people were different, now this is no longer the case. A Coldiretti-Ixé survey reveals that 32.7% of Italians would like to return to live in the countryside, where they hope to find new employment opportunities but also a better quality of life, and 46 young people under 35 per cent would leave their current job to become agricultural entrepreneurs (+ 10% in one year) if only they could acquire land. Coldiretti speaks of a true “cultural revolution”: among young people, 54% dream of managing a farm, against 21% who would like to work in a multinational and only 13% who aim for a job in a bank. And 68% would like to participate in the grape harvest or fruit picking.

New farmers are trained in school

The trend is punctually reflected in the data on enrollment in study courses: for the next school year the enrollments in agricultural, agri-food and agro-industrial technical institutes have increased by 12%, those at the professional institutes for agriculture and rural development of the 8%, those for food and wine and 5% hotel hospitality. And the number of people enrolled in the agricultural, forestry and food sciences degree courses has grown by 45% since 2008. 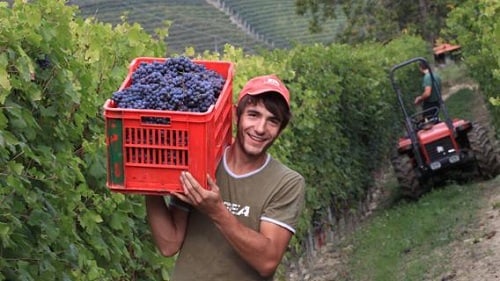