The “Bastardo del Grappa cheese of Burlina” is reborn, the ancient cheese of the Venetians

At his first Caseus Veneti he is already a gold medal. The native bovine breed, almost extinct after Mussolini’s autarchic policies, is now back in the Pedemontana: a small herd and a controlled supply chain project, from stables to large-scale distribution, all Made in Veneto.

From the stubbornness of a handful of lovers of typical Venetian cheeses and enthusiasts of the world of dairy farming, the cheese of our grandparents is reborn. Operationally started a year and a half ago, it reached its first major milestone: at Caseus Veneti 2014, X Regional Cheese Competition of Veneto, it awarded Bastardo di Vacca Burlina its first Gold Medal, as best cheese in the Semi- Hard (aged between 3 and 6 months). Behind a quality product, typical cheese of the Pedemontana del Grappa, a certified supply chain project that starts from the enhancement of a native bovine, included in the national register of breeds in extinction. The burlina, an animal raised for centuries by the Venetians in the mountain pastures of Treviso and Vicenza, was now almost extinct. The fault of the autarchic policies imposed by force by the fascist regime, which had led to the introduction of national breeds chosen for the highest yield in terms of quantity of milk. The prankster, small in size because it is suitable for pastures, capable of producing a smaller quantity of milk and yet of higher quality, was likely to remain only in the memory of some vintage photos. Now, however, the prankster has returned to the stables of the Pedemontana del Monte Grappa.

Today there are about 400 lactating animals: in the stables on the plains during autumn and winter, free among the green pastures of the Grappa huts, from May to October. Every day 13/14 quintals of milk are produced (milk with superior nutritional qualities) which is transformed into typical cheeses, Morlacco and Bastardo del Grappa. But we have gone far beyond the recovery of a bovine breed, in fact we have managed to organize the supply chain from the stable to the supermarket counter: today, in fact, Burlina cow cheeses are sold exclusively in the supermarkets of the Alì group, leader in the GDO Veneto, and are appreciated by consumer 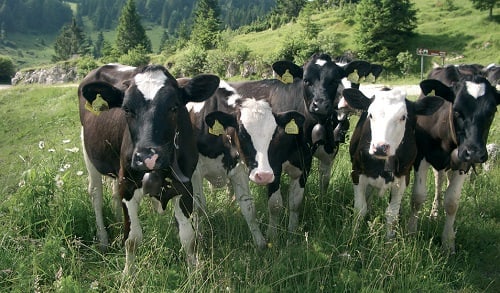