The 70th anniversary of the Cantina Viticoltori Ponte, the great Piave wine’s cooperative

Over the years it has incorporated the ‘sisters’ of Villorba, Eraclea and Caposile.

On the first afternoon of 7 September 1948, at number 35 in via Marconi, the “Cantina sociale di Ponte di Piave, a limited liability cooperative company” was born with a share capital of 12,000 lire. The public deed was drawn up by Carlo Marcati, a young notary from Treviso. The intuition on the goodness of the initiative came from Milone Tommaseo, who had already made himself appreciated by his fellow citizens at the time of the Great War when, for many years, he was mayor of Ponte di Piave. The other eleven courageous founders were Bernardo Segati, Giuseppe Gasparinetti, Antonio Berto, Isaia Pilloni, Giuseppe Cancellier, Giovanni Marchetto, Pietro Lorenzon, Enrico Rossi, Francesco Fregonese, Antonio Zambon and Gettube Rinaldin.

«The social cellar – explained the new president Milone Tommaseo that day – will protect the prices of wine and will have a calming function of the same and this for the benefit of all producers, even those who are not part of our institution. The cooperative of Ponte di Piave will then contribute to increasing the prestige of the entire agricultural area and to making the typical wines of the Piave known in the provincial and regional markets. ”Objectives and purposes that the great entrepreneurial activity still pursues with extraordinary results. The first location of the winery was in via Marconi, that is in the historic center of Ponte di Piave in some buildings rented by the company “Agricola Industriale” which today constitute the elegant residence called “All’Orologio.” Already at the end of 1948 the The cooperative had 116 members with a production capacity of about five thousand quintals of grapes, of which more than 70% were of the Raboso variety.

In 1955, the new plant was inaugurated along the Via Postumia, in the direction of Oderzo, which the shareholders’ meeting on May 16 of that year described as “a truly grandiose and beautiful work, admired and praised by all, be they ordinary people or technicians or even personalities of the branch “. Today the Cantina Viticoltori Ponte is always located in this same factory and is one of the most vital, flourishing and important cooperatives not only in the Triveneto, but even at national level and this thanks to the competence of the managers of the company and the various operators in addition a thousand members who, with their 2,500 hectares of vineyards, give each harvest the beauty of four hundred thousand quintals of grapes on average. Over the decades the cooperative reality of Ponte di Piave has, in fact, greatly expanded by incorporating, by merger, the important cellars of Villorba, Eraclea, and Caposile. It should be emphasized that, both in the main and in the secondary offices, there are some beautiful wine bars and one has also been added to them in the municipality of Vedelago. Currently, 15 million bottles are packaged at the headquarters in Ponte di Piave, while twenty thousand hectoliters of wine are sold at retail in the five wine shops. Satisfied with the results achieved, shareholders, employees and collaborators, as well as, of course, the President Giancarlo Guidolin and the general manager Luigi Vanzella.

“The next objectives – explains the director – are the enhancement of the grape harvesting capacity of the members and the adaptation of the technological systems starting from pressing to bottling. As regards marketing – adds Luigi Vanzella – we are already present in about thirty countries, in particular Germany, England and the United States, but we aim to expand even more ». A curiosity: currently 80% of the conferred grapes are white and the lion’s share is made by Prosecco and Pinot Grigio, while the red grapes are constantly decreasing. On Sunday 24 June the Cantina Viticoltori Ponte will celebrate its first 70 years of life. The awaited ceremony, in the presence of the Authorities, will begin at the company headquarters at 10.30. The presence of over 1000 members from the provinces of Treviso and Venice is expected.
Article by Alvise Tommaseo dated 21 6 2018 for www.tribunatreviso.it 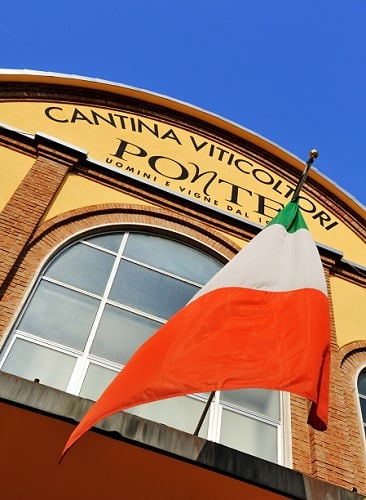