A hidden gem but easily accessible from the center of Ormelle. The small church of S. Giorgio is well worth a visit.

A last supper that will make you wonder if you are in front of a Giotto painting, so much is its beauty. Jesus and the apostles eat shrimp and drink red wine, two local products. Not to be missed. In the silence of the countryside between Ormelle and San Polo di Piave, in the locality of San Giorgio, stands the homonymous church. The door is open. Entering in silence the gaze is immediately captured by the “Last Supper” painted with mastery by Giovanni di Francia in 1466. Before describing this work which for its symbolism and pictorial technique can certainly be counted among the best dedicated to this theme, you have to take a step back in time. From the Latin inscription, under the “Last Supper” it is clear that the frescoes were commissioned to the artist with the clear will of the inhabitants of the time (HOC OPUS). The same will came back to life when in 1974, the inhabitants of the hamlet of S. Giorgio expressed their firm will to restore this extraordinary work, together with the others present in the Pieve.

Emblematic was the speech made by one of the promoters of this restoration, the master Ircano Zanet, who, during a public event, culminating in a concert, held on November 9, 1973, solicited the intervention of the State, but not only, extending it to all and motivating it with words that make you think. It is therefore appropriate to ask ourselves if in a wisely ordered hierarchy of values ​​there is no place (and perhaps even a small stage of honor) for the conservation and therefore the restoration of this small church of S. Giorgio, which, in harmony of lines and with the language of color, it brings us closer and makes us participate in the life of the ancient fathers, who worked in this land in faith and civilization.

Our ancestors, therefore, through the creation of these frescoes in their church demonstrate that sensitivity to art, combined with faith, which many would not have expected. The Venetians, painted too often as rough workers and in stereotypes, more inclined to raise a spade or a glass of wine, on the contrary demonstrate a sensitivity towards art that ennobles them and makes us proud to belong to this great people.

The work is of a truly disarming simplicity .. The twelve apostles seem to chat with each other with the friendliness that is usual of friends sitting at the same table. Unlike other more famous works, the diners are standing. The only one seated, and deliberately ugly, is Judas who appears smaller than the others. The details on the table enrich the work of art with objects and food from municipalities, which bring us even closer to a familiar, customary figure of Christ, close to everyday life. The other three devotional panels on the walls of the church portray “The Madonna with Child Enthroned and San Francesco d’Assisi”, “San Sebastiano and San Bernardino da Siena”, “San Giacomo Maggiore and Sant’Antonio Abate” by the same author and dated in the same year, 1466.

A small church that is certainly worth visiting and which despite being geographically located in the municipality of S. Polo di Piave, can be reached in a couple of minutes from the center of Ormelle. 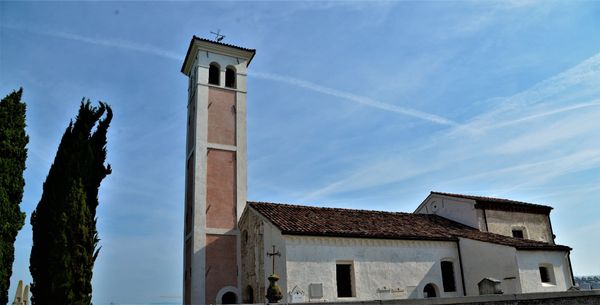