The 62nd edition of MIG, the International Ice Cream Exhibition at Longarone Fiere Dolomiti began under the best auspices. The beautiful day attracted many curious visitors, who were also attracted by the many political and business personalities present at the ribbon-cutting ceremony.

An edition that opened with an encouragement from the president of the province of Belluno, Roberto Padrin, to the citizens of the community of Casamicciola Terme affected yesterday by a landslide that created more than a few alarms. That said, the floor was passed to the Governor of the Veneto Region, Luca Zaia. “If pessimists don’t make fortunes, and I’m not saying this to advertise my book, then the MIG and our artisan gelato prove exactly the opposite thanks to those who wanted to see the future positively years ago, when our economic and living conditions were not so different from those of today. These Venetians left not to go and fill prisons in Germany, but to bring their experience and excellence. Just think of the creation of the cone. By now we all eat ice cream with the cone all over the world. It is a bit like talking about spaghetti, they are our invention. He who knew how to be optimistic even when everything seemed against him today reaps his rewards. Just think of the fact that years of experience and sacrifices in ice cream are now also recognised by the German Chamber of Commerce. High specialisation and maximum operability always pay off. The prerequisites for doing well and going forward like this are all there; because we are there both at regional and state level! But a trade fair is not a trade fair without a stand tour. So thank you to the exhibitors and everyone present and I declare the fair open’. Then the newly appointed president of the fair, Michele Dal Farra: ‘Thank you to all the institutions present today. I have only been president for a few days and we are here for two reasons: the first is the history that ice cream and MIG represent, and the second is the personal, commercial, friendship relationship that has been created over these long years between the Fair and the exhibitors. A true heritage has been created and we must start giving back what they have given us but looking to the future. It is like starting to write a book from the last page by immediately deciding on the title ‘building the future’. Change brings nostalgia on the one hand and enthusiasm on the other, and we must implement our strengths and our partnerships to win the challenge of being an excellence of innovation, reception, preparation. It is a game that is a final: either you win or you lose, but if we play it as a team made up of institutions and individuals who are linked by a single goal, then I am certain that we will win this race!” Having concluded his speech, the president gave the floor to Luca De Carlo, senator and chairman of the Standing Committee on Industry, Commerce, Tourism, Agriculture and Agri-Food Production. ‘Just yesterday I had a meeting with the President of the Province of Belluno, Roberto Padrin, to pick up the threads of a proposed law to protect and enhance our excellence, namely artisan ice cream. We have to make a useful law that, because of its importance, must be clear in the knowledge that it is of benefit to both the mayors and the entrepreneurs who represent us in the world with ice cream, and it cannot but be a law that contains this mountain hub (the Longarone Fair), which is a world capital, and it will be a law that will have to see the light of day in this legislature’. Then it was the turn of the president of the Province of Belluno, Roberto Padrin: ‘I thank all those present and the past president Gian Angelo Bellati and the new CDA. Bellati and the old board worked through a difficult period under the pressure of the pandemic, but they managed to come out of it with their heads held high and even managed to relaunch the fair in attendance. I also welcome the new president Dal Farra. The MIG is always a special event. Many companies were born here in Longarone, but watch out for the future, because we are the world capital of artisan ice cream. I close with the memory of De Pellegrin, to whom a special award will go today. I also remember Bellese, winner of the first Gold Cup in 1970 with the vanilla flavour and who passed away recently. Our embrace goes out to him and all his loved ones’. Before closing with Dario Olivier, MIG coordinator, Zaia and Padrin presented the De Pellegrin Memorial Award to the Ongaro family of ‘La Casa del Gelato’ in Caorle. Dario Olivier himself closed the event. “We want to share the MIG philosophy with you. For the second year running, we are focusing on eco-sustainability, starting with the new generations.

There will be a conference on this topic tomorrow. In the specially created German-speaking area we will talk about container recycling, which is an absolute novelty and will be awarded the green prize. Several stands will unite ice cream and gastronomy in this edition, starting with the union with chocolate, and special thanks go to the Sicilian granite makers who export a true excellence to the world. Among the most curious novelties this year we will also present ice cream for our four-legged friends. Just as it is pleasant for us humans to vary our diet and indulge in a few treats, why deny it to our dog friends? Another special feature of this edition will be a mid-European challenge between Austria and Germany in the Artglace venue, which has brought its legal headquarters here to Longarone Fiere with the Assembly held yesterday, where the judges will be the visitors themselves through a board. Then the Veneto region stand with its excellences and the coppa d’oro this year with the malaga flavour. Importance of the entire supply chain from producer to consumer. I would like to thank the entire structure that has worked to achieve these goals’. Doing the honours during the tour of the stands was Luca Zaia, who, like every year, had fun putting on his ice cream maker’s jacket and serving ice cream cups to visitors not only at the Veneto stand. 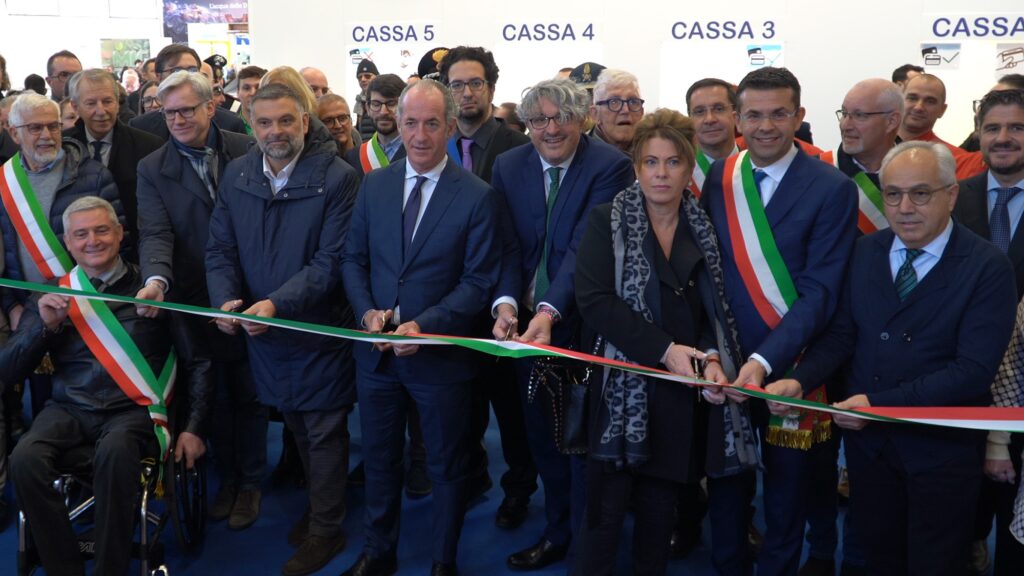