In Campo di S. Marina, near which this Sottoportico and this Court open, had a house and shop in 1661 ANTONIO SCALABRIN INDORADOR, who paid rent for them in Zuane and Santo Castelli.

The Venetian gilders enjoyed a very high reputation in the fifteenth and sixteenth centuries, and therefore were called to work in foreign countries. Gildings from those times are still preserved in a wonderful way. This art was a “colonel” than that of the PAINTERS, DRAWERS CUORIDORO TARGHERI, MASCARERI CARTOLERI (makers of playing cards) and MINIATORS, recognized as protector S. LUCA, gathering first in the church dedicated to this saint (where he had his own tomb ), and then in a special room in the church of Santa Sofia, built by testamentary disposition by the painter VINCENZO CATENA. The skill test for the GARDENERS consisted in setting up two strips of wood carved with ornaments, one flat and one concave, scraping them from the plaster, gilding them and cleaning them. Work that lasted several days and was done in the presence of an expert gilder. In 1773 the art of the DORATORI counted in VENICE 33 shops, 64 master builders, 70 workers and 10 apprentices.

The history of Venetian toponymy begins in the 9th century, when RIALTO, an island on the left bank of the GRANDE CANAL (that is, on the opposite side of the INSULA RIVOALTI of later settlement), imposed its name (already testified in 819) to the urban and insular aggregate which over the course of two centuries ended up being called CIVITAS RIVOALTI, synonymous with CIVITAS VENECIARUM, which embraced the old islands of Gemine, Luprio, Spinalunga, Olivolo, Canaleclo (Cannaregio), while the land reclamations were being extended, such as that of Dorsoduro by the communities of religious and the marshes dried up. Almost everywhere, superfluous pools and canals began to disappear, leaving their names only in old notarial papers, while wooden houses multiplied on the hardened grounds. For the designation of the localities, at first generic points of reference were used, the CAPITA, but it was the increasingly numerous places of worship that could provide certain and stable indications. After the mid-1000s when the city had a definitive ecclesiastical order, the city was divided into CONFINIA, territorial districts corresponding to the parishes, which at the end of 1100 were SEVENTY, and remained such until the Napoleonic age, leaving denominations that have survived the closure and demolition of the respective churches; the only exception is that of San GEMINIANO, a name that disappeared with the infamous Napoleonic destruction of the building. 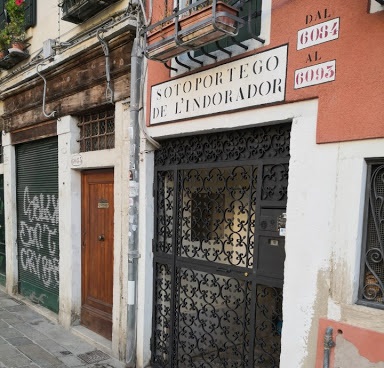