25 JULY 2013
ARTICLES
Sanctuary of Santa Augusta in Vittorio Veneto
The Sanctuary of Santa Augusta, the destination of a very popular walk, is located on Monte Marcantone, overlooking the Serravalle strait. The climb begins at the back of the apse of the Serravalle Cathedral, in Via Calcada. After a monumental staircase, crowned by arches and a statue of Santa Augusta, by G. Giordani, continue along a mule track which is at times cobbled and interspersed with steps, which winds first between two parallel walls of the fortified town of Serravalle, then wider on the wooded side of the hill.

The Sanctuary of Santa Augusta is flanked on the right by an ancient crenellated tower (now a bell tower) and on the left by a neo-Gothic portico, with a well in the center. Inside there is the Chapel of Saint Augusta Virgin and Martyr, which is the oldest part of the Sanctuary, all covered with valuable 15th-century frescoes, where the relics of the Saint are venerated. The symbols of the Four Evangelists and the Mystic Lamb are depicted on the cross vault. On the south wall, the fresco depicts St. Remigius recommending a crowd of penintents to the Virgin, belonging to the Confraternity of the Battuti. On the north wall is painted a Madonna enthroned between two Angels and offerers. Finally, on the back wall, a large Crucifixion stands out.

Behind the altar is the ancient Ark of the Holy, supported by two columns with Gothic capitals and decorated with interesting bas-reliefs. On the high altar there is a beautiful altarpiece, made by Gasperino Sanfiori, depicting the B.V. with the Child, San Biagio and Santa Augusta. On the altar towards the portico, another altarpiece depicting the Madonna enthroned with the Child, S. Biagio and S. Pellegrino by G.Francesconi.
From the large paved and partly grassy square around the Sanctuary, once very famous and still a pilgrimage destination (the feast of the Saint is celebrated on 22 August) the view sweeps from the Serravalle gorge to the Revine lakes, from Val Lapisina to Col Visentin and, towards the south, over the city of Vittorio Veneto and the plain.

A curiosity: tradition has it that to pass painful migraines, it is enough to insert the head into the gate that marks the place where a stone urn hid the saint’s bones, so much so that the popular voice says “le cordéle de S. Gusta healed them from the mal de suca ”!

Source: “Vittorio Veneto, illustrated guide of the city and its surroundings” by Vicenzo Ruzza
Photo: Municipality of Vittorio Veneto

The route of the ring of Santa Augusta starts from piazza Sant’Andrea, then continues along via Vinera, touches the sanctuary of Santa Augusta, the towns of Pradal, Scarpedal and Maren, and then descends into via Caprera, piazza Flaminio and returns to the point departure after about 12 kilometers to be covered on foot, running or riding a mountain bike or a horse.
The Naturally Vittorio Veneto project is carried out by the Marathon School in the network with Ascom Vittorio Veneto, Cai Vittorio Veneto, Frare De Nardi cycling tourism, Circolo Ippico San Mamante, Pro Loco Vittorio Veneto and Isrev.

The “Acts” of Saint Augustus were drawn up at the end of the 16th century by Minuccio de ‘Minucci of Serravalle, secretary of Pope Clement VIII. The news is legendary, as indeed happened for many martyrs of the early days of Christianity. Augusta would have been the daughter of Matruco, the Alemannic chief (of Alemagna, Germany), who had conquered and subdued Friuli. He resided in Serravalle (the current ancient village of the city of Vittorio Veneto) and was a bitter enemy of the Christian religion. Augusta secretly embraced the new faith, but her father learned of it anyway and had her arrested. Since she refused to apostatize, around the year 100 she was thrown into a prison and after various tortures, she was beheaded. 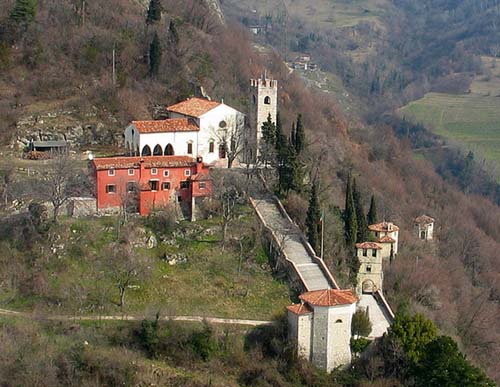