Saint Anthony – The most loved by the people in Veneto.

Saint Anthony, the most loved saint by the Venetians was born on August 15, 1195 in LISBON. Belonging to the Franciscan Order, he died at the age of 36 on 13 JUNE 1231. He was proclaimed SAINT in a time considered very fast the following year in 1232 and doctor of the Church in 1946. He traveled extensively between Portugal, France and Italy. In ASSISI he met and listened to SAN FRANCESCO. After Assisi he spent a short period near FORLI, a great preacher and known for his countless miracles and his great HUMILITY. SAINT FRANCIS sent him to France to oppose a movement of heretics with his gift for preaching. From here he was transferred to BOLOGNA and then to PADUA. His cult of him is among the most widespread in Catholicism together with SAN FRANCESCO and more recently to PADRE PIO.

It was composed by FRA GIULIANO DA SPIRA in 1233 two years after the death of the SAINT. Vinene has always been sung in the Basilica of Padua and its LATIN and ITALIAN version was often recited by our grandparents and great-grandparents when it was not possible to FIND a lost object. The effectiveness of this prayer linked to the name of SAINT ANTONIO has become proverbial and still works today if recited with faith and devotion (seeing is believing)

PRAYER IN LATIN IN ITALIAN. and in VIDEO

If you are looking for miracles,
here is death, error, calamities and the devil put to flight;
behold the sick become healthy.
The sea calms down, the chains break;
the young and the old ask and find health and lost things.
The dangers disappear, the needs disappear:
this is attested by those who have experienced the protection of the Saint of Padua.
Glory to the Father, the Son and the Holy Spirit.
As it was in the beginning and now and forever, forever and ever.
Amen.

And here is also the Latin version: 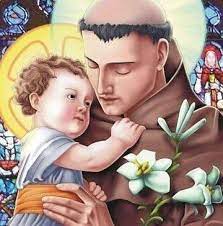