The history of Segusino cheese called “S-cek”
According to the International Congress for the Suppression of Food Fraud held in Geneva in 1908, the Cheese, from the Latin formaticum, coagulated milk in the form, is the product of the maturation of the curd obtained with the rennet or acid coagulation of whole or skimmed milk, but pure. , which has not undergone any addition of substances, with the exception of those products that are normally used in the manufacture of cheeses, such as enzymes, salt, spices. The Italian law, with the Royal decree of October 15, 1925 n ° 2033, makes these provisions its own.
In Greek and Roman antiquity we have mention of cheese made with sheep, goat and cow’s milk and, more rarely, of donkey and mare. The Latin writer Columella speaks extensively of his preparation, dedicating a part of his work to it; the invention of this important food is attributed to Aristeo, who would have been fed by the Nymphs with cheese and who would have learned the art of preparing it from them. The ancients compressed it with weights and special presses, salted it and then placed it in particular wicker baskets where the cheese, sheltered from the sun, dried slowly.
April and May were the preferred months for this operation. Both in Greece and in Italy there were famous places for the preparation of cheese: in Greece, the Cyclades, Crete, Boeotia, Chersonese. In Italy the first place is Sicily which is particularly celebrated for the manufacture of cheese; then the Ligurian Apennines, the territory of Luni, the Parmesan countryside, the Modena area, Sarsina. Even in Greco-Roman Egypt, the papyri tell us that cheese has been in common use since the 3rd century BC. Cheese has been considered one of the main means of nourishment since the Homeric age (OD. IV, 86).
During the Middle Ages, the manufacture and use of cheese continued to be practiced on a large scale in all European countries where the Romans had spread this technique. Of course, we cannot yet speak of real industry, but of domestic manufacturing. In the fifteenth century an Italian doctor, Pantaleone da Confidenza (Vercelli), who became famous in France, wrote a “Summa lacticiniorum”, in which he recalled a whole series of famous French cheeses, such as those from Nimes, Brie, Grande Chartreuse, but also from not exactly cheerful names, such as Testa di Morto or Testa di Frate, with which, given their being “very delicate et gustui soaves”, it was possible to make croutons of bread and melted cheese (exponuntur igni cum quodam in an iron instrument … et sicut liquefiunt superponunt crustis panis assati aliqualiter).
In Italy the systematic irrigation of the land, which since the 13th century began to be practiced on a large scale in the Parma area and in Lower Lombardy, also resulted in the beginning, with the increase of livestock, a real dairy industry, which went more and more developing in the following centuries and which had its main centers in Parma and Piacenza. Since the time of Charles VIII (1470 – 1498) these cheeses also spread widely in France, to the detriment of local production and in the following century there is no lack of evidence attesting to the fact that workers from Italy were responsible for the manufacture of the French cheeses themselves. The development of applied natural sciences and that of mechanics naturally gave an impulse to the dairy technique, gradually pruning it from the empiricism that enveloped it and making it what it is today 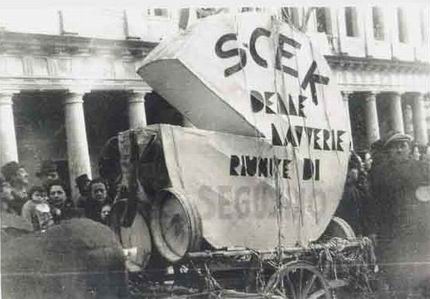