Many important names at the Deltablues 2021 International Festival

Ente Rovigo Festival, thanks to the important financial support of the Fondazione della Cassa di Risparmio di Padova and Rovigo and the partner Municipal Administrations of Rovigo, Adria, Lendinara, Loreo, has in fact managed to set up a program of evenings, which in addition to having as protagonists important names of national and world blues, will feature many new emerging artists with concerts that will be held in suggestive locations throughout the Polesine.

With the aim of bringing new audiences closer to quality music, there is a 20% reduction on the price of tickets for children under 18, the students of the F. Venezze di Rovigo and A. Buzzolla of Adria Conservatories and the UniverCity Card holders of the University of Rovigo Consortium, as well as for the partners of the Rovigo Jazz Club and Slow Food Rovigo partners and COOP Alleanza 3.0, main sponsor of the Festival.

“Culture – said Tovo – is the best way to be together, cultural events represent sociality and promotion of the quality of well-being for all. We are therefore very happy to present this Festival today, which represents a cornerstone of the events in our territory ”.

Piazza Cavour in Adria will be at the center of two evenings with two bands per evening with great Italian and international artists as protagonists: on 3 July the Savana Funk, a young but already established Emilian group will open the evening that will be concluded by Sekou Kora Trio led by Sékou Kouyaté authentic virtuoso of the “kora” in a mix that brings together sounds rooted in West African traditions, blues, soul, funk and jazz. On July 4th, after the opening concert of the young and promising Bassopolesan band Romea, the two-day adriese will end with Davide Shorty & Straniero Band, a young but already successful artist returning from success in San Remo where he finished second. in the “new proposals” section. On both evenings the tickets will be 5.00 euros.

The entertainment area set up in the square of the CenSer in Rovigo will host the last two weekends of the Festival with great concerts that will see some of the major international artists perform.

Friday 9 July the Turin band I Shot a Man, winners last year at our Festival of the competition will open the evening, which selected them to represent Italy at the International Blues Challenge in Memphis 2021 (postponed due to COVID in January 2022). The evening will be concluded by John De Leo with the Jazzabilly Lovers project in which he re-proposes rock and roll standard jazz like songs by Elvis Presley and Stray Cats. Transversal artist, singer and composer, De Leo is a great innovative artist able to experiment but also to enthuse (ticket 10 euros).

On 10 July the very young Sticky Brain band, five young musicians of great talent will have the opportunity to open the evening in which Deltablues has the honor of hosting one of the greatest jazz players in the world: Paolo Fresu with the artistic project Devil Quartet (Paolo Fresu, Bebo Ferra, Paolino Dalla Porta, Stefano Bagnoli), perhaps the one that best suits a festival like Deltablues in a perfect balance between electric sounds and Jazz tradition. Admission € 15.00.

In the following weekend Deltablues, keeping to its name, presents two evenings entirely dedicated to the Blues. The Italian-British team Superdownhome feat. Nine Below Zero, Superdownhome (Beppe Facchetti and Enrico Sauda, ​​guitars and drums) will be “on stage” with Dennis Greaves (Guitar and voice) and Mark Feltham (harmonica and voice) in a captivating and exclusive musical project, born from the contamination between the “Rural-Blues” by Superdownhome and Rock’n’Roll / Blues by the legendary Nine Below Zero.

The second concert on July 16 will be that of Baba Sissoko Mediterranean Blues which sees the contribution of Italian artists (Domenico and Fabrizio Canale, Alessandro De Marino, Angelo Napoli) and international artists (as well as Baba Sissoko, Erick Jano and Kalifa Kone), in it will find the traditional music of Mali – at the origin of the blues – with jazz, the Blues (ticket 10.00 euros).

On July 17th the first show will feature Ian Siegal & Mike Sponza Band. Siegal considered by many to be the best English bluesmen, at the top of the European scene, will be accompanied by the band of Mike Sponza, one of the best Italian blues guitarists and a permanent partner of Siegal. impact on my musical world and my voice ”. She will be accompanied by an entirely Blues band with the internationally renowned Hammondist Pippo Guarnera as a special guest (Admission € 15.00).

The last stop of the 34th edition of the Deltablues Festival will be in the Delta, in the suggestive setting of Scanno Cavallari, near Porto Levante, where the concert of Diana Sissoko & Massimo Garritano Duo will be held on July 18 (admission 5.00 euros plus cost of the ferry).

Deltablues in addition to the support of the Foundation of the Savings Bank of Padua and Rovigo and the Municipal Administrations of Rovigo, Adria, Lendinara, Loreo, is also organized thanks to the collaboration of valuable partners: the state conservatory “Francesco Venezze”, the Province of Rovigo, Rovigo Jazz Club, Assonautica Veneto Emilia, Slow Food Rovigo, the web radios RadioBlueTu and Stazione Blues Radio of Bologna, the magazines REM and Il Blues, Az Blues and Rootsway.

Special thanks to the two main sponsors: COOP Alleanza 3.0 and Mater Biotech-Novamont. 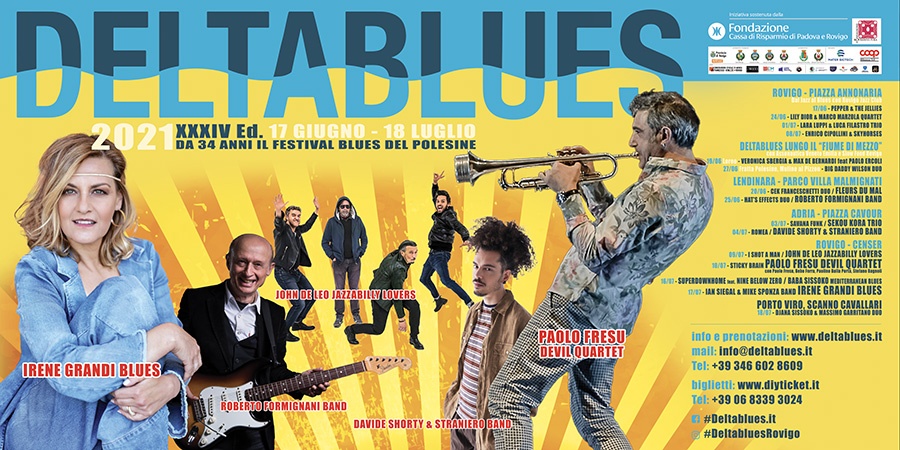