The Castle of Roncade, an elegant 16th century Venetian villa, is today the symbol of one of the most important wineries in the Marca and a place of great events.

You say castle and immediately imagine a feudal manor, a fortress with mighty walls, impregnable. Then you see the Castle of Roncade, an elegant Venetian villa from the 16th century, founded by the Venetian Giustiniani family, and you understand that it is a unique example. The young Ernest Hemingway, a volunteer on the American Red Cross ambulances, also passed through here during the First World War. «Villa Giustinian, more commonly known as Castello di Roncade – explains Claudio Ciani Bassetti, of the owner family – is one of the rare Venetian villas surrounded by walls. It is not a question of defensive walls, but of boundaries. The villa was in fact built in a period of peace, which the Serenissima Republic baptized Pax Veneta ».
THE HISTORY Let’s start from the crenellated walls, with two high central towers and two side towers, to explore this architectural jewel, property of the Trentino family of Ciani Bassetti barons since 1930. «The most important studies on the Villa are by Mario Botter and Professor Douglas Lewis of the National Gallery in Washington; it seems that the project of the walls is attributable to Fra ‘Giocondo, the same one who intervened on the walls of Treviso “. Passing the entrance gate, the elegant and light manor house strikes in the background, surrounded by a large garden guarded by motionless statues of Venetian soldiers, the Schiavoni; on both sides, two barns. “The charm of this place – continues Claudio Ciani Bassetti – derives from having maintained the agricultural vocation over the centuries, which continues today in the cellar, which has its headquarters here. The villa is completely inhabited; up to three years ago, the entire winemaking chain was carried out here; now, the processes have been moved not far away, but we have kept the cellar for the aging of red wines in barrique “. For what purpose was the Villa founded? “Considering the decline of Venice’s commercial vocation, the noble Giustiniani family decided to invest in a farm in the countryside. Inside, hundreds of people worked on hundreds of hectares. Instead of the castle garden, we must imagine a threshing floor, with farmyard animals and a farmer’s market; under the arcades of the barchesse, related activities and artisan shops ».

PRODUCTIONS What were the agricultural productions of the time? “Cereals, including rice. With the discovery of America, corn was introduced, which defeated hunger, but introduced pellagra. Then, the silkworm and the vine were fundamental for the economy of the area, as early as 1500. The land around here, especially the area of ​​Via Pantiera, already produced excellent wines. Let’s consider that wine, until the mid-20th century, was a food in all respects. The daily ration of an employee was around 4-5 liters per day ». As for the silkworms, they were fed with mulberry, a plant that has now disappeared. “Exact. Behind the villa, based on ancient prints, we are restoring the old orchard, an area halfway between the vegetable garden and orchard. There will also be mulberry trees, which in Venetian villas symbolized prosperity, since silk brought wealth ».

ENHANCEMENT How are the Ciani Bassetti family trying to enhance the Villa? «In addition to the winery, known since the 1960s, we try to open the villa to the public: with guided tours, with ad hoc events, collaborating with various cultural initiatives with local associations and with the Municipality. Finally, with the farm, which allows tourists to sleep in the Castle “. In addition to the walls, is there a particularity of the Castle that makes it unique? “The clock on the pediment, from the 16th century, one of the oldest in Italy, still working, almost identical to that of Piazza San Marco in Venice. Mark the hours, the zodiac, the phases of the moon. Together with the beating of the bells, for centuries it was the reference clock for the entire community of Roncade “.

A market exhibition of made in Italy

At the Castello di Roncade the advent of spring and autumn are celebrated with an exhibition-market of Made in Italy excellence. The participating artisans and nursery gardeners – over 80 exhibitors from all over Italy – are selected with great attention by the owners of the Villa. Those who pay the entrance ticket are also offered a complimentary bottle of wine. In addition to the exhibition-market, the Primavera in Castello and Autumn in Castello events they revise some workshops of artistic craftsmanship and circus juggling for the little ones.

THE BOOK
“Colossal soldiers defend towers of suggestive beauty”
Mario Botter, the famous restorer and painter from Treviso, was very attached to Villa Giustinian. In fact, the Ciani Bassettis entrusted him with the work to refurbish the Castle, as he recounts in the volume La Villa Giustinian di Roncade, published in 1955, the first volume of the Small Monographs of the Venetian Villas, series of the Canova Publishing House in Treviso. 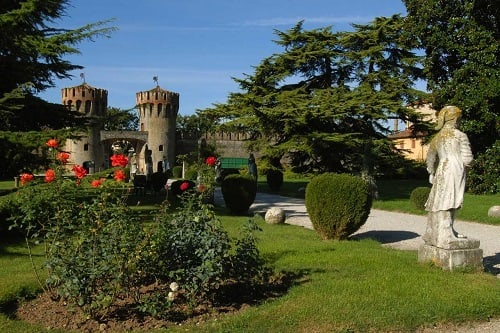