Revine Lago and the Sanctuary of San Francesco da Paola

24 APRIL 2015
ARTICLES | RELEASES
Revine Lago and the Sanctuary of San Francesco da Paola
The town and landscape of Revine are dominated by the sanctuary of San Francesco da Paola, built between 1677 and 1702 by the parish priest Don Domenico Cumano, who also wanted to be buried there.
The Cumano, apostolic protonotary and a very religious man as well as very cultured, enriched the sanctuary with many works by local workers: paintings by Cremsl, Sasso, Tacco, Lazzarini, just to name a few.
The sanctuary was also structured to be his home and in fact there is an upper floor where there is a kitchen, a bedroom and some service areas. In particular, it is worth mentioning the interesting pictorial cycle that adorns the walls of what is known as Don Cumano’s room, located above the sacristy.

These are frescoes painted in 1718 by the Fregonese painter Francesco Da Re, representing the five Joyful Mysteries of the Rosary.
The images are represented in panels decorated with fake marble frames and interspersed with genre skits and landscapes. On the west wall, after the entrance, you can admire an Annunciation of the angel to Mary, followed on the south wall by the Visit of Mary to St. Elizabeth and the Nativity, while the east wall houses the Presentation and the Finding of Jesus in the temple . The figurative sequence ends with the Crucifixion on the north side. Traces of frescoes, still to be investigated, are also visible in the corridor.

In the surroundings we recommend: a walk to the castle of Monte Frascon (12th century), just north of the sanctuary, where various remains of the medieval fortification can be found in the still existing houses. Going down into the town center, you will find the parish church dedicated to San Matteo, dating back to the 1300s, heavily remodeled starting from the 1600s. There is an altarpiece by Egidio Dall’Oglio from Cison. The whole town of Revine is characterized by the typical stone and wood rural houses. The same goes for Lago where the old (now the community hall) and the new parish church of San Giorgio are located. In the latter you can admire another altarpiece by Dall’Oglio, depicting the Madonna del Rosario with Child and Saints, and the sixteenth-century Coronation of the Virgin between San Giorgio, San Biagio, Santa Apollonia and Santa Maddalena by Francesco da Milano. Not far away is the Livelet archaeological park, which organizes interesting educational activities.
In Santa Maria di Lago there is the ancient church of S. Maria, attested from the 12th century, which houses two frontals by E. Dall’Oglio and the work of F. Da Milano depicting the Coronation of the Virgin between St. John Baptist and St. George. There is also a valuable wooden statue of the Madonna with Child by an unknown author. Outside, at the foot of the staircase, a unique stone alms box.
On the old road between S. Maria and the lake, the poor wall remains of the ancient church of San Martino.

The most important traditional dates in Revine Lago are the following:

• In September, the San Matteo festival in Revine, the “Musada” (race of the ‘Musse’ – sledges of the past, traditional parade with period costumes, songs, trades instead of typical means of transport of the mountain area ) and other games and entertainment for adults and children.

Easter period (Palm Sunday and Good Friday) sacred representation of the Passion of Christ from the churchyard of Revine to the Sanctuary of Francesco.

July (second Sunday), for the “MAGNALONGA”, in “Pian delle Femene”, the “FIENAGIONE” is proposed again. 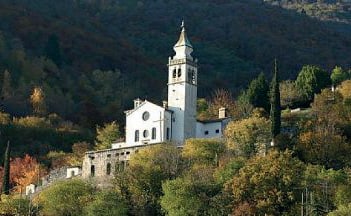