Rainbow trout from the Sile River

Rainbow trout from the Sile River

Territory interested in production
In some municipalities of the province of Treviso that are crossed by the river: Istrana, Morgano, Quinto di Treviso, Treviso, Casale.

History
In Veneto, in particular along the course of the Sile river, favored by the numerous fresh spring waters present in the area, the first examples of “trout farming” in Italy have been started since the end of the 1950s, which have made it characteristic produced and have been taken as an example for the development of aquaculture in other areas of Veneto. The particular characteristics of the water of this river, in fact, respond well to the needs of reproduction and breeding of trout: an average temperature around 13 ° C and a sufficient quantity of oxygen for the digestive processes are the conditions that have allowed the development of the Treviso industry that today manages to put between 10 and 15 thousand quintals of fish on the market per year.

Product description
The rainbow trout is a freshwater fish of the Salmonidae family. It is characterized by a slender body dotted with black (including the fins and tail) and small scales. Rich in multicolored reflections, with shades of green, purple and blue, it has an iridescent orange or pink band along the sides that becomes particularly evident during the reproductive period. It is marketed when it reaches 45-50 cm in length. It has very good meats with a pink color and a delicate flavor. Its meat is firm and compact and has the advantage of preserving its organoleptic qualities from the moment of processing and marketing; they can have the characteristic of being white or pink and for this reason they are called salmonate.

Production process
Thanks to the good environmental characteristics, not only the trout farming activity has developed in the area but also the entire food chain of the product. The reproducers are selected and then squeezed to obtain the eggs which are sprayed with the male’s semen for fertilization. Placed in special embryonators, they are then hatched in hatchery where they remain up to about 100 grams in size. They are therefore selected and placed in more capacious channels, with greater availability of water for fattening until commercial sizes are reached, operations that require a duration of about 12-24 months. For white meat trout the commercial size reaches up to 350 grams; for those with salmon meat from 350 grams upwards. The product obtained is processed according to market demand and can therefore be sold: alive for sports fish ponds, fresh as it is in polystyrene boxes or destined for processing (gutted trout, fillets, slices, etc.). The product intended for processing is captured alive in the purge tanks, then processed immediately, packaged and shipped to its destination within a few hours, strictly following the cold chain; part of the production is also destined for the freezing line which also includes the preparation of frozen dishes ready to be cooked.

Availability
They are available all year round at any retail fish market.

Uses
Rainbow trout is an extremely valuable food from a nutritional point of view, with high digestibility and also suitable for a low-calorie diet. It has numerous culinary uses; it can be cooked in foil, grilled, boiled or in other imaginative preparations. 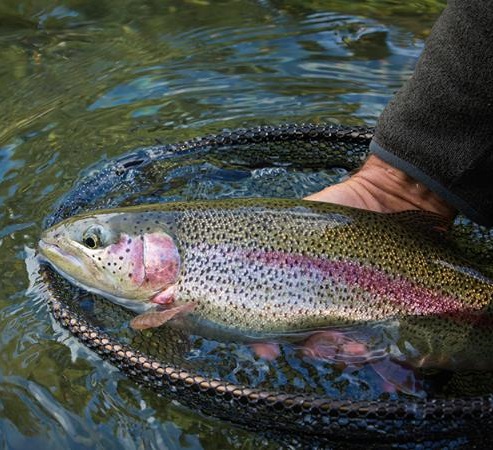