It does not have the fame of the Treviso red radicchio or the Cimadolmo and Badoere asparagus, just to mention three products from the agri-food sector of the Marca. But it excels for its characteristics and quality: it is the Patata del Quartier del Piave.
On the red and gravelly soils called «ferretti», which are rich in potassium and iron, potatoes are grown in the plain of Moriago, Sernaglia and Vidor (and to a small extent in a corner of Pieve di Soligo). There are not many producers, there is no consortium, but the Potato of the Quartier del Piave was discovered by chefs and is so appreciated by restaurateurs, diners and many private admirers who buy it.
The cultivation, depending on the season, is on an area ranging from 80 to 100 hectares and production is around 30 thousand quintals per year. Features? «Soils that do not have stagnation of water as they are gravelly and rich in potassium which allow to have a potato consisting of the different varieties» says Luciano Giotto, agricultural entrepreneur and one of the major producers. And among the varieties of the product offered to consumers is the “Cornetta del Piave” which stands out for its small cylindrical size.
Despite a season with above average rain, the potato was not affected by the fact that it was “born” in gravelly soils with low temperatures and greater temperature variations and the first harvests were of a good level with excellent sizes, as was the quality. And then, as for radicchio and asparagus, there are more than positive results for the Potato from the Quartier del Piave, destined for the fresh market, both locally and in Veneto, also crossing borders thanks to Opo Veneto. In short, in times of crisis, quality agri-food is rewarded. The harvest, which began in July, ends in August with a few points in September. Then, with the beginning of autumn, the Potato from Quartier del Piave remains a (positive) memory for those who have had the opportunity to taste it in various uses in the kitchen thanks to its versatility. From October on the markets are no longer available: the demand has increased and the product is not grown on a large scale, so that there are not enough stocks to satisfy customers throughout the year.

Any synonyms and dialectal terms
Potato from the Quartier del Piave.

History
The potato is today one of the best known and most beloved products appear on our plates; grown everywhere and in large quantities. It has only recently been re-evaluated for its fair value: it has in fact acquired importance and prestige both in the Right and in the Left Piave, so much so that by now everyone knows the Montello potato and that of the Quartier del Piave. Piave is the plain of Moriago, Sernaglia and Vidor, characterized by reddish soils, called ferretti, particularly rich in iron. In Moriago della Battaglia, for over twenty years, the Potato Festival has been organized as part of the Ferragosto holidays: on the occasion, visitors can attend the exhibition of the prized varieties of potatoes grown in the surrounding plain, as well as taste typical dishes and particular recipes, in which this vegetable plays the leading role. – Product description The potatoes come mainly from the Spunta and Monnalisa varieties, the most suitable in the area in question and resistant to diseases. Depending on the type, they have a more or less elongated ovoid shape, a variable color from white to straw to yellow and a more or less thick brown, yellow or reddish-yellow skin. The size varies from 60 to 120 g.

Production process
The potato is grown with traditional techniques, using organic fertilizers, in clayey soils that ensure sufficient humidity for its maturation. The soil can dry out in late July, when the tubers become ripe, so in the following period (about 20 days) the skin becomes resistant. Any foliar interventions, mainly against downy mildew, are based on copper sulphate and lime.The cultivation medium is already, due to its chemical-physical peculiarities, rich in potassium and is worked with surface plowing and preparation of the seedbed by harrows rotating. The product is packaged in special bags of 2.5 to 5 kg and, in the phase prior to bagging, is subjected to calibration, cleaning and eventual elimination of damaged tubers.

Uses
The potato has many uses in cooking. It can be cooked in various ways and contribute to the preparation of soups, soups or condiments. It is also used on an industrial level for the extraction of alcohol, starch or as a base for forage.

Availability
Throughout the year and at any market it is possible to find the product in its various varieties. 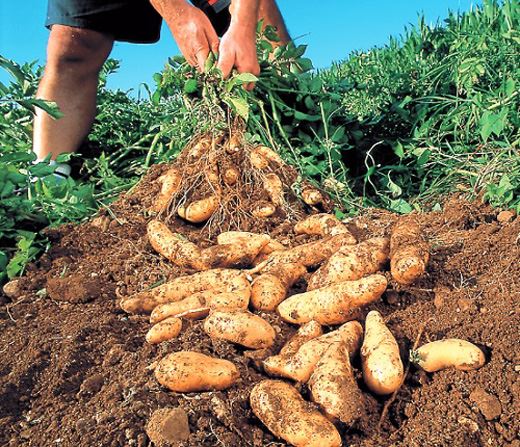