IL SUPERIORE DI CARTIZZE is the cru of the appellation and is represented by a small area of ​​107 hectares of vineyards, between the steepest hills of S. Pietro di Barbozza, Santo Stefano and Saccol, in the municipality of Valdobbiadene.

It arises from the perfect combination of a mild microclimate and a very varied soil, with moraines, sandstones and clays, which allow for fast rain drainage and, at the same time, a constant water reserve, which allows the vines to develop in a balanced way.

The “Cartizze” is a sumptuous sparkling wine. Already the color refers to a greater intensity, which manifests itself with a complexity of inviting and ample aromas, from apple to pear, from apricot to citrus, to rose, with a pleasant note of glazed almonds in the aftertaste. The flavor is pleasantly round, with a soft sapidity, to which the subtle perlage gives vigor to the taste. Known in the Dry version, it has a sugar residue up to 32 gr / l, it goes well with traditional sweets, shortcrust pastry, fruit tarts and focaccia. Recently some producers have also introduced the Brut type.

The name, “CARTIZZE”, indicates the famous and restricted hilly area, of about 100 hectares, completely planted with vines, within the Prosecco DOCG area and more precisely in the municipality of Valdobbiadene in the hamlets of Saccol, Santo Stefano and San Pietro di Barbozza . This is where the famous Prosecco Superiore di Cartizze or Cartizze for short is produced.

A real cru that comes from the perfect combination of a mild microclimate and an ancient soil, originating from the uplift of the seabed. Above the mother rock there is a very varied layer of soil, with moraines, sandstones and clays that allow for a fast drainage of rains and, at the same time, a constant reserve of water, so that the vines develop in a balanced way.

The area is characterized by a rocky soil with a balanced chemical constitution with constant humidity, where the Prosecco grapes ripen more slowly and, in the end, enjoy a richer and more complete acid and harmonic outfit.

From the 107 hectares of the Superiore di Cartizze sub-denomination, an average of 1 million bottles are obtained every year of a unique and sumptuous sparkling wine.

The product is called Superiore and differs from Prosecco di Valdobbiadene-Conegliano for some characteristics:

The grapes that come from Cartizze must be vinified only within the municipality of Valdobbiadene and, moreover, Superiore di Cartizze can only be marketed if it is sparkling and bottled. Usually the sparkling wine is made according to the Charmat method.

Excellent with shortcrust pastry, fruit tarts, desserts with creams, dry pastries, spoon desserts. However, it is also excellent as an aperitif.

In Cartizze, in late October the Prosecco grapes reach complete ripeness, this guarantees a greater concentration of aromas and flavors and the possibility of giving the sparkling wine a more sweet and dense taste without compromising its freshness. The base wine is obtained by careful fermentation in white, until almost total exhaustion of the original natural sugar (a trace of sugars helps to preserve the fruitiness), after the wine is left to undergo the winter colds that strip it of tartrates and cause it ‘clarification.

In spring, selected yeasts are added to the wine, capable of fermenting under pressure and at rather low temperatures, and sugar in such quantities as to obtain, with its subsequent fermentation, the desired pressure. At the end of fermentation, all that remains is the desired sugar to ensure amiability. The wine ferments at a temperature of around 15 ° C and after a fortnight or more it will reach the desired pressure. At this point the refermentation is stopped so that the desired dose of residual sugar remains, by refrigerating the autoclaves. In this way the yeast sinks to the bottom and the wine, after 8-10 days of rest at this temperature, is passed, with appropriate precautions that allow not to lose pressure, in other autoclaves from which it is then immediately bottled. For bottling the classic Prosecco is used, green in color, which guarantees the protection of the wine from light 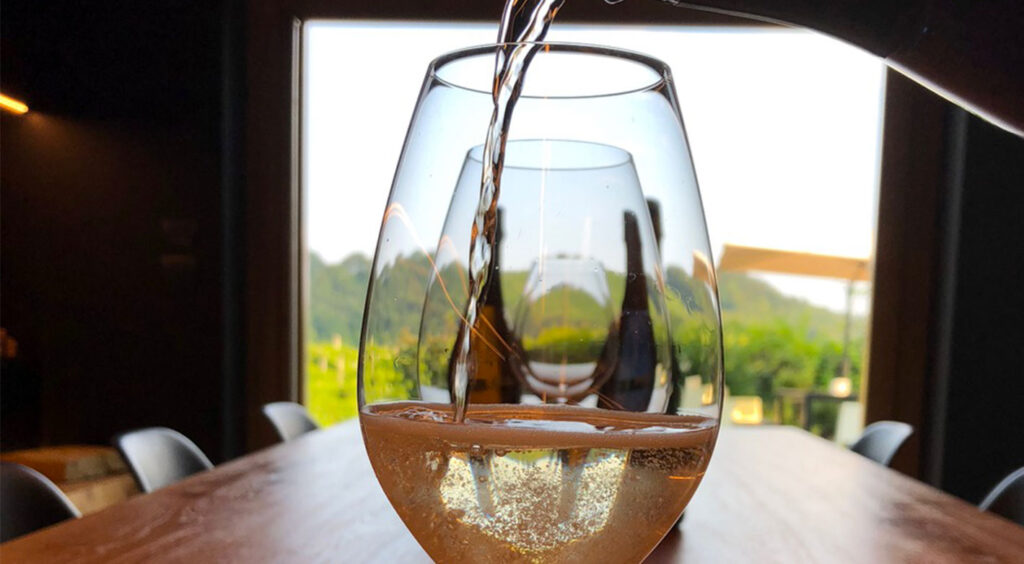