Prosecco Run: already 1400 participants for the race through the vineyards and cellars of the Docg

Important numbers for the Prosecco Run, the international marathon scheduled, together with the Prosecchina, on Sunday 4 December in Vidor (TV). In a little over a month the curtain will be raised on the 12th edition, which already has over 1400 registered participants. The desire to run in the spectacular scenery of the Prosecco hills, a Unesco heritage site, is great. There are two Tri Veneto Run proposals, the 21.097 km Fidal international race and the 10 km promotional race under the aegis of the UsAcli open to all. The race will take place on the roads of Prosecco Superiore Conegliano Valdobbiadene Docg and runners will be able to admire the scenery of Vidor, Mosnigo, Colbertaldo, Valdobbiadene and San Giovanni. Important numbers for the event sponsored by the Association for the Heritage of the Prosecco Hills of Conegliano and Valdobbiadene.
Among those registered, over 40% were women, a very high and extremely rare percentage in the world of running, with even more women registered than men in the 10-kilometre Prosecchina. In addition, 45% of the participants, more than 600 people, came from beyond the borders of the Veneto region.
Leading the ‘classification’ of regions with the largest number of representatives is Emilia Romagna (191), followed by Lombardy (145), with Friuli Venezia Giulia following. There will also be foreign representation, with runners from Chile, France, Germany, the United Kingdom, Holland, Poland, the Czech Republic, Romania, Serbia, the United States, Switzerland, Ukraine, Slovenia and Sweden.
Boom on social media also for the video launching the 12th edition of the Prosecco Run (link): over 10,000 views in just a few days on Instagram, Facebook and Youtube.
Francesco Sartori, president of Tri Veneto Run, comments: “We are very satisfied with the number of participants for this year’s Prosecco Run, which pays off for the promotional efforts made year after year. We strongly believe in this event, which has been enriched with a promotional 10-kilometre race, the Prosecchina, in order to promote sports tourism. The Prosecchina is designed not only for runners who are less used to long distances, but also for accompanying persons who, following the marathon participants, will be able to run or walk with them and experience, in part, what the competitive runners experience along the 21.087 km of the international Fidal race. Many come from outside the region to spend not just a Sunday, but an entire weekend in our territory, visiting our wine cellars, appreciating our villages, staying in our facilities and tasting the food and wine delicacies of our tradition. To be able to run in the heart of the Prosecco hills, a Unesco World Heritage Site, I believe is a great emotion, and we can assure you that the views and glimpses of life inside the cellars will be truly special. This year, then, the passage through the Abbey of Santa Bona in Vidor will also give a touch of solemnity to the Prosecco Run’.

Registration for the half marathon is open until 27 November via the Internet, following the instructions on the website www.prosecco.run, with on-line payment by credit card or bank transfer (via Keepsporting). The next fee will start on 21 November: until 20 November, the registration fee is EUR 30.00, then it will rise to EUR 35.00). Registration, subject to availability of bibs, will also be possible on site, at the multifunctional centre in Piazza Capitello in Vidor on Saturday 3 December from 14.00 to 18.00 and Sunday 4 December from 7.30 to 9.15. As far as the Prosecchina is concerned, in addition to the online registration, it will be possible to purchase an identification bracelet to participate (subject to availability) on the morning of the event, Sunday 4 December, at the start located at the La Tordera Winery in Via Alnè Bosco 23.
Alongside Tri Veneto Run, in the organisation of the twelfth Prosecco Run, there are Maratona di Treviso, Gruppo Sportivo Lepri strache, Pro Loco of Vidor and Colbertaldo. The event has the patronage and contribution of the municipalities of Vidor, Moriago della Battaglia and Valdobbiadene and the authorisation of Fidal and US Acli. Important contributions from Silca Spa, Banca Prealpi SanBiagio, Alì Supermarkets, San Benedetto, Biemmereti-Sognoveneto, Doge Logistica, Officine Ghizzo, Manuel Caffè, Scatolificio Sarcinelli, Amadio F.lli, Kiron, Gammasport, Centro Frutta Conegliano. Media partners Radio Company, Oggitreviso, La Tribuna di Treviso. 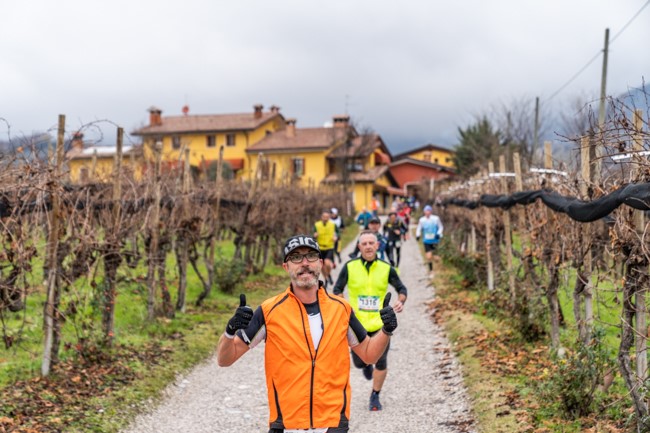