Prosecco DOC Extra Dry by PONTE1948, the Prosecco of the Misano MotoGP Grand Prix THE PROSECCO OF MotoGP ™

They will be the bubbles of Prosecco DOC Ponte1948
to turn on the circuit and the champions on the podium of the two Misano Grand Prix
scheduled for 20 September 2020.

Toast with the champions on the podium, another Italian doc: the Prosecco DOC Extra Dry by PONTE1948 which supported them on the track and accompanied them during the most important moments of the whole weekend, with worldwide media coverage in 207 countries and about 370 millions of screens.
“After the convincing debut of 2019 – commented Luigi Vanzella, General Manager Viticoltori Ponte – this year we have decided to make our presence in MotoGP ™ even stronger, participating as Official Supplier in both Italian Grand Prix. San Marino was the perfect race, a concentration of emotions that culminated in a victory for Italy that rewards not only the drivers and the teams, but the whole of our country that is fighting bravely to overtake this delicate historical moment “.
The appointment is therefore next Sunday for the TISSOT Grand Prix of Emilia Romagna and the Rimini Riviera, also in Misano, with the hope that on the podium, as a backdrop to the PONTE1948 jéroboam, there will always be the tricolor!

Viticoltori Ponte (ponte1948.it), founded in 1948 with headquarters in Ponte di Piave in the province of Treviso, is one of the most dynamic and important companies on the international wine scene. It represents 1,000 members, with 3,000 hectares of vineyards, which extend from the north of Venice to the foothills of the province of Treviso, and about 15 million bottles produced. Present in over 30 countries around the world, Viticoltori Ponte guarantees for the entire range of its wines – from still to sparkling wines, from sparkling wines to organic – a high quality standard certified and testified by the numerous awards received from the most authoritative interlocutors in the sector. 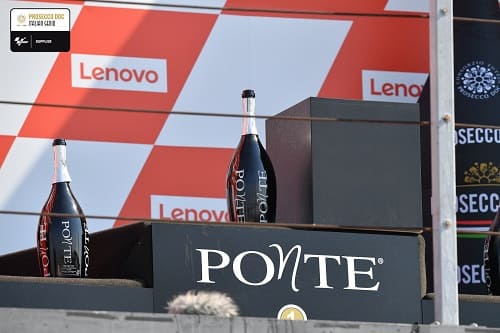