OCTOBER 3, 2021
APPOINTMENTS | RELEASES | EVENTS
Prosecco Cycling changes date: it will run on October 3, registrations open from April 7
The awaited appointment in Valdobbiadene has been postponed by a week to avoid concomitance with other events. “We have met the requests of fans,” explains organizer Massimo Stefani. The original format has been confirmed that this year will reward even the slowest team with the black jersey. And for all participants it will be a weekend dedicated to the “Tiramisù Taste Event”

Prosecco Cycling changes date: the 2021 edition of the eagerly awaited event in the heart of the hills of Conegliano and Valdobbiadene will not take place on 26 September, but on 3 October. The change of date is due to the repositioning of other events on the Sunday when Prosecco Cycling was originally scheduled.

“It was not an easy choice – comments the organizer of Prosecco Cycling, Massimo Stefani -. In the end we decided to meet the many requests of the fans who in recent weeks have written and phoned us, expressing their disappointment at the overlapping of dates. Prosecco Cycling was born on October 3, 2004: we will celebrate the eighteenth birthday on the original date “.

Also in 2021 Prosecco Cycling will propose the original format in the name of a fun and quality competition that in recent years has met with the appreciation of many fans. The novelty of the year is a special ranking called 4.10 and will award the slowest teams on the three timed climbs – Ca ‘del Poggio, Via dei Colli and Collalto – which characterize the 100.4 kilometers (with 1600 meters of elevation gain) of track among the vineyards. The team that will prevail in this ranking, resulting the worst in the sum of the averages achieved by its 10 slowest cyclists on the three climbs, will be rewarded with the inevitable supply of Conegliano Valdobbiadene Prosecco Superiore Docg and with a sopressa – typical cured meat of the Treviso tradition. – in giant format. Each of the team members will also receive the Black Jersey made by the technical partner Giessegi. An exclusive recognition that will go to reward the ten champions of slowness, the first among the last. The timing of the climbs will also determine the individual classification, which will consider the sum of the times taken to climb Ca ‘del Poggio, via dei Colli and Collalto. 12 categories that, between one toast and another, will be awarded in Piazza Marconi in Valdobbiadene.

The other two team rankings have also been confirmed, which now represent a “must” for Prosecco Cycling. One will reward the teams capable of placing the highest number of cyclists (minimum ten) across the finish line within 30 “, making the most of team compactness. The other, called Fun Team, will reward the group (made up of men and women alike, as long as they are members of the same team) that will set the best time on the entire race course. With one particularity, however: the group must be composed of at least five participants, who will have to cross the finish line within 30 ‘and the time will be taken on the fifth competitor.

The 2021 edition of Prosecco Cycling will coincide with the “Tiramisù Taste Event”, a great showcase for the famous dessert of Treviso origin based on cocoa, coffee, mascarpone, ladyfingers, eggs and sugar. Once the participants in Prosecco Cycling have crossed the finish line in Valdobbiadene, they will move to the nearby Villa dei Cedri for a moment of tasting, extended to their companions, of the popular spoon dessert. Tiramisu will also be the protagonist on the eve of Prosecco Cycling. Thanks to the partnership with the Tiramisù World Cup, Saturday 2 October, at Tenuta Villa Sandi, the traditional headquarters of Prosecco Cycling, one cyclist for each team will be involved in the greedy challenge that will decide the best tiramisu. And the winner will be admitted by right to the semifinal of the Tiramisù World Cup.

Not just tiramisu, however, at Prosecco Cycling. The event on October 3 will also be an opportunity to discover the typical dishes of the area. In fact, this year too, after the success of 2020, Prosecco Cycling will be accompanied by the Grand Tour Gourmet. Thanks to the contribution of Ama Crai Est, main food partner of the event, and to the support of other institutional partners who will involve their members in the Grand Tour Gourmet, the participants of Prosecco Cycling will find in the race package a discount voucher of 15 euros that they can use no longer for one but for two consecutive weekends, from Friday 1st to Sunday 10th October, to have lunch or dinner in the restaurants, trattorias and agritourisms participating in the event.

Registrations for the 2021 edition will open on Wednesday 7 April and provide for reduced rates for team memberships. 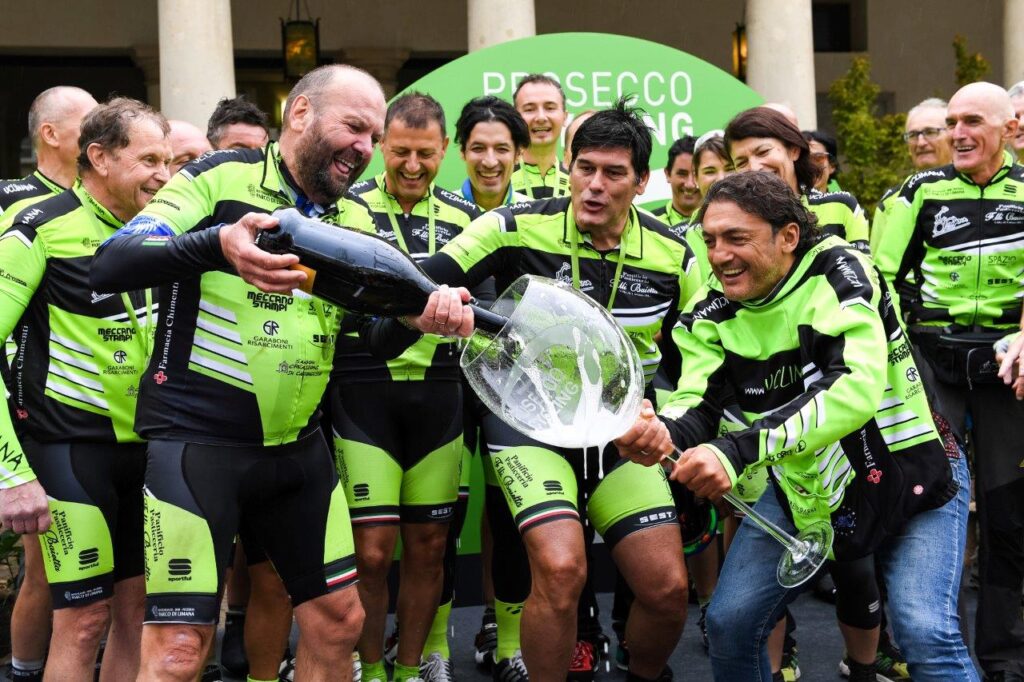