Prosecco is an Italian white wine, lively and fragrant, whose production origin dates back to Prosecco (Trieste) anticipating the era of the Roman Empire and exploded in the second half of the 19th century in the hills of Conegliano Valdobbiadene. It stands out for the finesse and freshness of its aromas.
Suitable for all occasions and all types of cuisine, with its informal character and its flexibility of combination, it has managed to win over consumers from all over the world.
The production of Prosecco takes place according to the rules of the Docg and Doc regulations, which establish the production of the grapes, their fermentation and the subsequent natural “fermentation”. This gives rise to around 380 million bottles of sparkling wine and above all sparkling wine, a version produced with the “Italian method” in large containers, capable of enhancing the aromas that are the basis of its success.
Today Prosecco is produced exclusively in the Controlled Designation of Origin area which includes nine provinces between the Veneto and Friuli Venezia Giulia regions. In the heart of the denomination, between Venice and the Dolomites, is Treviso, the province with the greatest productive vocation, which also includes the historic and renowned hilly areas of Conegliano Valdobbiadene and Asolo, which boast the DOCG, controlled and guaranteed denomination of origin. .
Prosecco Doc is distinguished by the wording DOC on the state band which guarantees its traceability and authenticity. The DOCG sparkling wine from the hilly area is recognized because the label always shows the name of the production area, Conegliano Valdobbiadene or Asolo, and can boast the adjective “Prosecco Superiore”.
Asolo, a beautiful medieval village, combines winemaking tradition and Venetian art. Conegliano Valdobbiadene is the best known area. Conegliano, a center of production and studies, boasts the 1st Italian Oenological School since 1876; Valdobbiadene and its district are renowned for the beauty of the vineyards that embroider the hills, whose slope requires traditional handwork. The Cartizze, cru of the DOCG originates from the uniqueness of this territory.
Prosecco DOCG disciplinary: Guaranteed DOCG for the historic area CONEGLIANO VALDOBBIADENE, where Prosecco is Superior

In recent years, many imitative phenomena have developed around Prosecco: this is understandable given the success of the product and the increasing trust and consideration by consumers. These phenomena, difficult to monitor and control, risked confusing Operators and Consumers both in Italy and abroad, and damaging one of the most popular products of the “Italian style”. For this reason, after a long work, on 17 July 2009 the reorganization of Prosecco was approved by the Ministry which sees the raising of controls and guarantees and which establishes a radical change: Prosecco in fact is no longer the wine obtained from a type of vine, but it becomes the wine of a specific territory.

The change led to the definition of two different quality levels: the attribution of the DOCG for Conegliano Valdobbiadene, and the creation of a basic DOC that replaces all the current Igt.
FROM HISTORICAL NAME TO DOCG
Forty years after the recognition of the Controlled Designation of Origin (DOC 1969), Conegliano Valdobbiadene, together with the small area of ​​the Asolo Hills, enters fully into the highest Italian classification of quality wines: the Controlled and Guaranteed Designation of Origin.
The historical structure of the Denomination remains intact, but the overall vision changes and expands, allowing the product to be further enhanced.
The territory is a guarantee of Superiority. All DOCG wines show the name of the Denomination “Conegliano-Valdobbiadene” in the foreground on the label followed by Prosecco Superiore, in the case of sparkling wine.
The sparkling wine can simply carry the name of the main denomination Conegliano-Valdobbiadene or Conegliano or Valdobbiadene on the label.
The production area. The production area is the historical one, limited to the 15 hill towns between the two productive capitals of Conegliano-VaIdobbiadene; a dimension that testifies to the preciousness of the product. Specifically, therefore, the hilly territory of the municipalities of Conegliano, San Vendemiano, Colle Umberto, Vittorio Veneto, Tarzo, Cison di Valmarino, Follina, Miano, Valdobbiadene, Vidor, Farra di Soligo, Pieve di Soligo, San Pietro di Feletto, Refrontolo and Susegana, in the province of Treviso.
The grapes. As a tradition, the wine is produced with a minimum of 85% of Glera grapes and, for a maximum of 15%, of Verdiso, Bianchetta, Perera, Glera grapes, a long variety present for centuries in the hills of Conegliano-Valdobbiadene. For the sparkling wine, Pinots and Chardonnay grapes can also be used.
Production. The production of the DOCG is 135 quintals / ha

The news.
With the introduction of the “Rive”, reserved for sparkling wines, it was also possible to highlight the name of the municipality or the fraction of origin of the grapes on the label.
The term “Rive”, in the local dialect, indicates the vineyards located in steep terrain, and aims to highlight the vocation and the many differences that express the different locations of the denomination. For the “Rive”, production is reduced to 130 quintals / ha, with the obligation to manually harvest the grapes and indicate the vintage.

The “Cartizze”. At the top of the quality of the Guaranteed Denomination remains the sparkling wine of the historic sub-area of ​​the “Superiore di Cartizze” whose yield in the vineyard is 120 qli / ha.
Organoleptic characteristics: more or less intense straw yellow color; vinous, characteristic, light, fruity aroma, particularly in the sweet and sweet types; taste and pleasantly bitter, not very full-bodied in the “Dry” type, fruity in the sweet and sweet types.
Qualifications: if the grapes come from the territory of the San Pietro di Barbozza district, called Cartizze, it has the right to the subspecification “Superiore di Cartizze”.
Pairings: aperitif, delicate fish starters, stewed and roasted lake and sea fish, stewed cuttlefish with vegetables, poached octopus.
Types: Sparkling, Sparkling and Still
Data sheet
Conegliano Valdobbiadene Prosecco Superiore DOCG
Conegliano Valdobbiadene Prosecco Superiore is a DOCG sparkling wine, with vital elegance and fruity and floral aromas, produced exclusively in the hills of Conegliano Valdobbiadene, starting from the Glera grape.
Production area in the municipalities of: Conegliano, San Vendemiano, Colle Umberto, Vittorio Veneto, Tarzo, Cison di Valmarino, San Pietro di Feletto, Refrontolo, Susegana, Pieve di Soligo, Farra di Soligo, Miane, Follina, Valdobbiadene and Vidor.
Grapes: Glera 85%, Pinot, Chardonnay, Verdiso, Bianchetta trevigiana, Perera, Glera long for a maximum of 15%
Characteristics: fresh, versatile and with a moderate alcohol content
Color: pale straw yellow with greenish reflections
Perlage: fine and persistent
Dosages: Brut, Extra dry and Dry
Olfactory and gustatory notes
Brut: aromas rich in citrus scents and pleasant vegetal notes combined with a beautiful and lively gustatory energy. Persistence of flavor and cleanliness of the palate. Sugar residue from 0 to 12 g / l.
Extra dry: fresh and elegant, rich in aromas of fruit, apple, pear, with a hint of citrus that fade into the floral. The wine is soft and dry at the same time thanks to a lively acidity. Sugar residue from 12 to 17 g / l.
Dry: exalted the floral fruitiness, delicate, fruity scent, with hints of citrus, white peach and green apple. Taste savory, fresh, soft on the palate, thanks to its elegant sweet note. Sugar residue from 17 to 32 g / l.
Pairings
Brut: it should be served at 6-8 ° C, appreciated on fish and vegetable appetizers, even elaborate ones, first courses with seafood and baked fish dishes or, as is used in the production area, throughout the meal
Extra dry: excellent as an aperitif, on legume and seafood soups, pasta with delicate meat sauces, fresh cheeses and white meats, especially poultry
Dry: type that adapts to the most particular combinations, with dry pasta desserts or spicy foods of fusion cuisine
Service
It should be served at a temperature between 6 ° and 8 ° C and to taste it a rather large tulip-shaped glass is recommended that allows you to appreciate the aromas in their richness
PROSECCO DOC – THE BASIC NAME

To protect Prosecco and control the quality of production, the new Prosecco base denomination was established. The Prosecco variety will be indicated with the old synonym “Glera”.
The legal reasons. The full recognition of “Prosecco” as a Denomination of Origin referring to a wine and intellectual property protected by the legislation on quality products of the European Community, was made possible thanks to the combination of two factors: on the one hand, the production tradition of Treviso, a province where 90% of all current Prosecco production is concentrated and where the DOCG hills are located, and on the other hand the presence of Prosecco, located near Trieste and historically linked to the origin of the vine.

The production area. The DOC production area includes the 9 Veneto-Friuli provinces where the cultivation of the Prosecco grape was already authorized. This new Doc includes and replaces the existing Igt (Prosecco Colli Trevigiani, Prosecco Marca trevigiana, Prosecco del Veneto, Prosecco Alto Livenza, Prosecco delle Venezie) in a single territory.
The new Doc also provides for the possibility of specifying the area of ​​origin of the grapes for the provinces of Treviso and Trieste.
The characteristics of the Doc 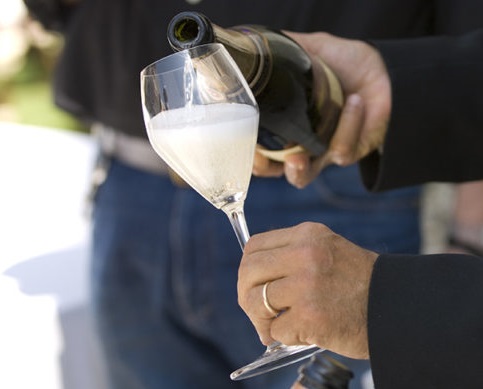