The curtain of the 36th UYN Venicemarathon officially rose this morning at M9, the Multimedia Museum of the 20th Century in Mestre, which hosted the presentation of the event that this year, alongside the marathon and 10K, will also see the 1st UYN Venice Half Marathon, over the classic distance of 21.097 km.

This will break all participation records with 15,000 athletes at the start over the three distances, of which around 30% are foreigners. Numbers that make Venicemarathon one of the most fascinating marathons of the autumn, and an event capable of generating an important economic impact on the territory, also thanks to its international media showcase. The race will be broadcast live by Raisport, visible on digital terrestrial (channel 57), on satellite (channel 227), with a connection starting at 9.35 a.m. (time to be confirmed) and in streaming, also from 9.35 a.m., on the websites www.raiplay.it and www.venicemarathon.it. The live broadcast will be shown in China with Shanghai TV Sports, in Israel with Sport5 and in New Zealand with Sky New Zeland, with highlights distributed to over 90 foreign countries.
The first race to start will be the UYN 10K that will start at 8.30 a.m. from Parco San Giuliano, followed by the UYN Venice Half Marathon that will start from the ‘living room’ of Mestre, in the shadow of the ‘Clock Tower’ at 9 a.m. and then the Venice Marathon from Villa Pisani in Stra scheduled for around 9.40 a.m. Once again this year, the Villa will exceptionally open its gates to host all the pre-race services up to the moment of entering the starting grids. Riva Sette Martiri, in Venice, will welcome from 9 a.m. to 4 p.m. the arrival of all competitors. The three races will form a long and spectacular snake that will unite Stra to Venice in an ideal embrace.
The event was presented this morning at the Museo del ‘900 M9 in Mestre. With a bit of emotion, Venicemarathon patron Piero Rosa Salva explained the genesis of the new race: ‘After the difficult period of the Covid pandemic, we are starting again this year with great courage and with a project, that of the half marathon, which we had been working on for some time and which we wanted to launch in 2020. Our choice was to create a start in the city centre, to give Mestre its own specific opportunity for visibility in the Venicemarathon context. This first edition, limited in numbers, was a great success and we are very confident for the future’.
“We are happy to continue our collaboration with the Venicemarathon, which for 36 editions has had the merit of bringing thousands of sportsmen and tourists from all over the world to Venice and its hinterland. Events like this are credited with keeping the city alive and its economic-productive fabric, which is worth 45 billion euro, vital. A mosaic composed for the most part of SMEs that testify every day to the values of corporate culture: hard work, sacrifice, competition, continuous improvement, cooperation, fun, respect, fair play, as in sport. For these reasons, in addition to the extraordinary athletes who will participate in the race, the winner of the marathon will invariably be Venice together with its territory,’ said the president of Confindustria Venezia Vincenzo Marinese.
“We enthusiastically support Venicemarathon, a true celebration of sport and inclusion that also has the enormous merit of succeeding in strengthening the bond between the Venetian hinterland, the port and the historic city. It is therefore an honour for the port community to be able to collaborate for the success of the event and, thanks to the Trofeo Porti del Veneto organised by the Authority, we want the event to also be an opportunity to support solidarity initiatives in our territory,’ says Fulvio Lino Di Blasio, AdSP president.
Registration has now closed due to sold out in both the 21K (2,000) and the 10K (6,500), while there are still a hundred or so bibs available in the marathon (maximum of 6,500) and a few more in the VM10K – LILT FOR WOMEN: the ‘pink’ race (also open to men) organised by the Italian League for the Fight against Tumours, which is organising the UYN10K to promote the culture of cancer prevention and, at the same time, celebrate its 100 years of activity.
Numbers that, as the general coordinator Lorenzo Cortesi emphasised, will generate an important economic spin-off: “With a 30% increase in the number of enrolled participants, the economic spin-off on the territory will also be far greater than the 10 million euros estimated in the latest study by the Venice and Rovigo Chamber of Commerce, data that we will then confirm with a new report that we will produce after the event”.

“It will be the edition of enthusiasm – these are the words of the deputy mayor of Venice Andrea Tomaello – the numbers are growing, the Family Runs are back in full swing, and a series of collateral sports promotion activities such as ‘Salta, Corri e Zoga’ are being organised.
From Friday 21 October, in fact, things get into full swing with the opening of the 31st Exposport Venicemarathon Village (inauguration at 11.30 a.m.) and precisely with the initiative ‘Jump, Run, Zoga in Autumn’, which will involve many sports associations that will set up mini-competitions and demonstration lessons of a sporting nature.
Once again this year, the smile and cheerfulness of Giusy Versace will light up the Lagoon. The Paralympic athlete, writer and Senator of the Republic will be the patroness of the Alì Family Run, the five non-competitive races, supported for the seventh year by Alì, dedicated to the promotion of sport in schools, which have already been held in Portogruaro, Chioggia, San Donà del Piave and Dolo-Riviera del Brenta, and which will end on Friday 21 October in Mestre-Parco San Giuliano, in the presence of Versace. Part of the proceeds from the event will go to the non-profit organisation she founded 11 years ago, Disabili No Limits, through which she provides prostheses and aids to people with disabilities who wish to take up sport.
“I can’t wait to applaud the thousands of students who will be running in the avenues of San Giuliano Park on Friday morning, and I am thrilled to know that their run will above all be a gesture of solidarity towards others. As I often repeat, those who do not experience disability can run by virtually lending their legs to those who do not have them’ – these are the words of Giusy Versace.
Moreover, as pointed out by Rotary District 2060 Governor Tiziana Agostini, the Alì Family Runs are again this year an important vehicle for spreading the culture and importance of polio vaccination, through the slogan ‘EndPolioNow’ on all the t-shirts.
Also happy to celebrate and applaud the passage of this 36th edition of the Venicemarathon are the mayors of the Riviera del Brenta who spoke this morning, such as the mayor of Stra Caterina Cacciavillani, the mayor of Fiesso d’Artico Marco Cominato, the mayor of Dolo Gianluigi Naletto, the mayor of Mira Marco Dori, and the Head of Promotion, Communication and Institutional Relations of the Port System Authority Federica Bosello.
Also present at the conference were two of the founders of Venicemarathon, who now hold important sports positions, such as Francesco Uguagliati, president of Fidal Veneto: “In the role I hold, I have seen many marathons in the world, but none is as beautiful and fascinating as it is difficult from the organisational point of view as the Venice Marathon. Only those who have been behind the scenes understand what I am talking about,” and Massimo Zanotto, now CONI Venice delegate, “The Venicemarathon has always had the ability to innovate, with an eye to sustainability, inclusion, integration, and the environment, values that in sport all clubs should pursue.” 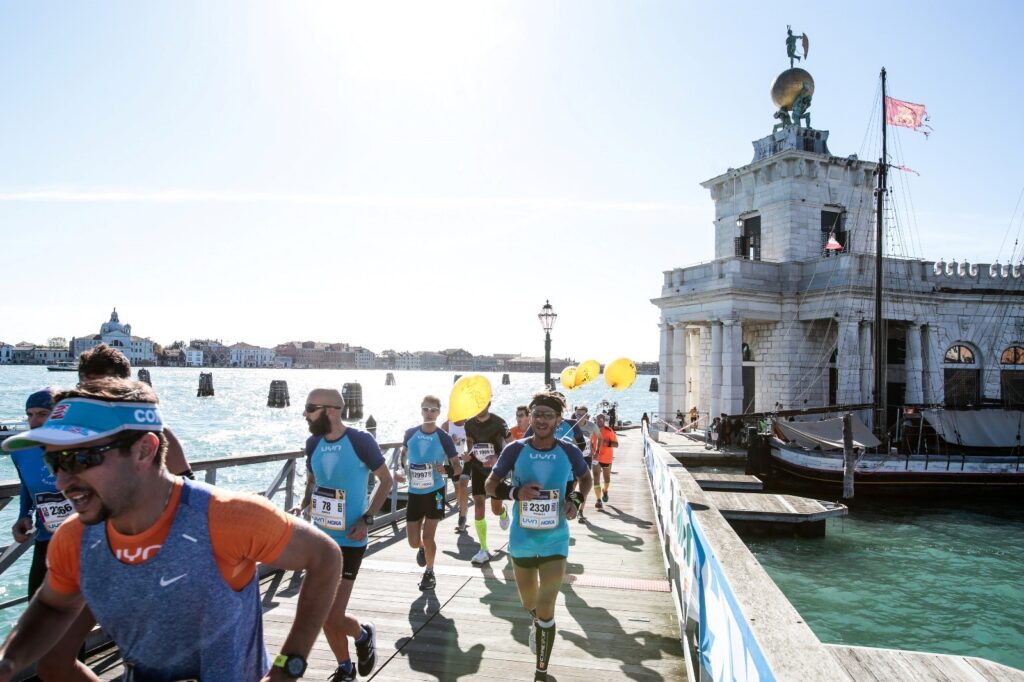