20 MARCH 2017
ARTICLES
Portobuffole ‘, a tiny village distilled of beauty
Portobuffole ‘, on the border between Veneto and Friuli, is a jewel
rich in history as evidenced by frescoes, bridges and palaces

A jewel-like town on the border line between Treviso and Pordenone, concentrated in five square kilometers for centuries lapped by a river that has now stopped carrying trade and floods, even if the bridges over what was once its riverbed remain, today covered by a turf. For the Romans, this was Septimum de Liquentia, a village of farmers and fishermen on the bend of the river seven miles from Opitergium (Oderzo), which later became Portus Buvolendi, or port channel (bova in medieval Latin), or Portus Bufolendi (port of bufaline, boats used for the river transport of goods), then a rich medieval merchant town with a castle with seven towers and then an important podesta office of the Serenissima. Finally, after a long nineteenth-century decline, the wars and floods of the twentieth century – which the deviation of the Livenza in 1913 was not enough to prevent – today is the resplendent Portobuffolè: a village where water has drawn history and where history can be read in the geometries of the streets and squares, in the decorations of ancient buildings and in the pride with which a few hundred inhabitants guard it.
Immerse yourself in the past. Crossing the stone bridge that led to Porta Trevisana, destroyed in 1918 by the Austro-Hungarian troops during the retreat, is already an immersion in the past to immediately admire the singularity of the village in Piazza Beccaro, dominated by richly frescoed ancient houses. A little further on, the grace and simplicity of the house of Gaia da Camino meet, with its fifteenth-century decorations, therefore posthumous to its famous tenant who died in 1311. The frescoes inside (fifteenth century) are of almost modern vivacity and tell their time with figures of princes and fortified cities, towers, palaces and pages in conversation.

At Gaia’s house. The dates don’t lie: Gaia most likely lived within these walls, but her house was not as we see it today. It seems that her decorations were intended to pay homage to the figure of this emancipated fourteenth-century woman, a patron of great beauty, culture and intelligence who was also an authoritative figure in political matters and one of the first poetesses in the Provencal language, cited by Dante in Purgatory. The historical opinions about her are divided into those who portray her as a vicious and dissolute woman, who as pious and sober: a fascinating and mysterious figure, of Portobuffolè who was the center of courteous and chivalrous literature. But the mystery could also be easy to solve: it seems that in the da Camino family there were two women named Gaia, with very different lives.

In the heart of the village. A few steps through narrow streets with an ancient charm lead to Piazza Vittorio Emanuele II (but Piazza Maggiore remains in the collective memory), which has always been the residence of public offices and the most representative families, as evidenced by the beautiful buildings of different eras that surround it, among the which stands out the Renaissance-style Palazzo Pretorio which opens onto the square its loggia with elegant sixth oval windows. It is a remake of the ancient Fontego (deposit) of grain and salt (for which a highly manned Customs Office was also active) and which also housed the exchange counters, the shops and the lodgings of the merchants who arrived in the adjacent port of Porta Friuli.

The Jews in Portobuffolè. Next to the Palazzo Pretorio stands the Monte di Pietà, set up by the Venetians as a warehouse for pledges with assets confiscated from the Jewish community, banned from the city in 1480 following the conviction (which later proved unjust) of some of them, accused of infanticide and burned alive in Piazza San Marco. The Jews had created a credit institution in Portobuffolè that supported the flourishing businesses and had also erected their Synagogue, which in the sixteenth century was transformed into the current Cathedral dedicated to San Marco. Next to it stood the Archisinagogue’s house, on the outer wall of which you can see the remains of what used to be the surrounding wall of the Ghetto, where a plaque in Hebrew commemorates the tragic expulsion.

A “revolutionary” lion. From the small square in the historic center you arrive at the “Toresin” that surmounts Porta Friuli, the main access road to the fortified city via the eighteenth-century terracotta bridge of the same name that replaced the drawbridge of the original castle, next to the commercial port. On the external arch of the tower, a Lion of St. Mark praises the “rights and duties of man and citizen”, an evident sign of the passage of the French Revolution, while on the right side of the bridge the remains of the ancient walls of the medieval city are visible , with a small Mouth of Truth of Roman origin embedded.

The “slondrona”. Legends and studies, investigations and curiosities surround from ………A long time ago an underground tunnel of two meters wide, almost three in height and about fifty in length until today excavated from the access hatch along the ancient walls, not far from the Fontego. Familiarly called “Slondrona”, it is the ancient underground tunnel that connected the two ports of the city. Inside, wooden steps, paved with Istrian stone and wolf mouths that have allowed, over the centuries, many different uses, such as for example as a vent for sewer pipes. But it presents important and different aspects from those of similar artifacts already known in other centers, whose interpretation continues to fascinate scholars.

Portobuffolè is one of the nine municipalities in the Veneto that boast the Orange Flag of the Italian Touring Club, an environmental tourism quality mark intended for small inland towns that stand out for their excellent offer and quality hospitality. It also belongs to the Club of the Most Beautiful Villages in Italy, thanks to its excellent historical integrity.

A bit of history

The Civic Tower and the prison The millennial Civic Tower, with its almost 30 meters high, is the only one left of the seven towers that once fortified the Castle, even if the medieval battlements have been replaced by sixteenth-century friezes that soften the massive structure. Near the clock mechanism, renovated in 1879, there was a hole from which the condemned were lowered into the underlying prison, which was active until the beginning of the twentieth century. Today it is the seat of the Upper Livenza Peasant Civilization Museum and, from the ancient windows and loopholes, it also offers a magnificent view that amply repays the effort of climbing. By reservation only.

The Cycling Museum – Casa Gaia Da Camino
In these parts, cycling is a pulsating passion and well-established competitive practice. Since 1995 the spaces of Casa Gaia Da Camino have hosted the “Alto Livenza” Cycling Museum, dedicated to two great cyclists from nearby Sacile: Giovanni Micheletto (1889-1958), winner of the 4th Giro d’Italia with the legendary Atala, and Duilio Chiaradia, (1921-1991), the first great Rai cameraman and inventor of sports television shooting, in particular of
that cycling, which earned him the fame of “writer for images”. Since then, the collection has grown considerably, with relics of increasing value. Currently, it is one of the most important Italian museums dedicated to cycling.

Barbie’s tailoring
The former elementary schools of Portobuffolè have hosted, since 2015, the unique permanent exhibition of hundreds of tailor-made Barbie creations. It is the colorful Atelier of the Barbie, where you can admire clothes and accessories that tell times, fashions, characters and trends thanks to haute couture clothes, reproduced in the smallest details for the most famous doll ever by Mrs. Grazia Collura. It can be visited, often with the guidance of the creator of this collection of patience, passion and skill, on Wednesdays and Saturdays from 2 to 3.30 pm, and also all day during the Antiques Markets (free admission). Also open by reservation: tel. 0422.850020

Not to be missed

The antiques and collectibles market
On the second Sunday of each month the historic center of Portobuffolè comes alive with the Antiques and Collectibles Market: over 200 exhibitors meet with enthusiasts who recognize the event as one of the most qualified references to find antiques, old and used things, comics, books, prints and collectibles. The atmosphere of the village does the rest.

The most convenient motorway exit to get to Portobuffolè is that of San Donà-Noventa along the A4. Then continue on the SP83 to the center of Ponte di Piave, from which you continue along the SP53 until you pass Oderzo. At this point you drive on the SP50 without detours to your destination. Portobuffolè is not served by the railway line, but can be reached by the Atvo bus lines from Oderzo, Pordenone and Sacile. 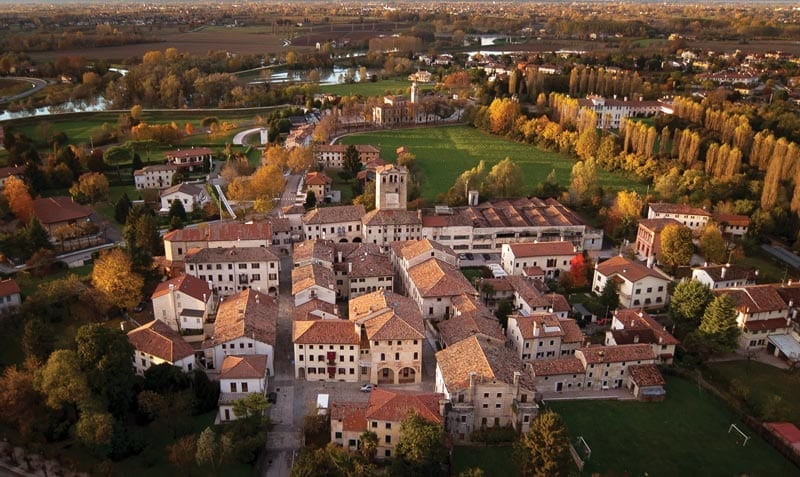